New Canaan Police at 2:30 p.m. on June 17 received a report that a vehicle parked on East Maple Street had been keyed, with the scratch running from from the rear of the vehicle to the front passenger door.

A server at White Buffalo was bitten by a dog at the bar and restaurant, according to a report received by police at 7:28 p.m. on June 17. The dog is from New York State and is quarantining at home, officials said. 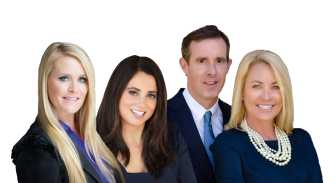 Congratulations to The Sneddon Team of William Pitt Sotheby’s International Realty’s New Canaan brokerage for being named as the #1 Small Team in the state of Connecticut by sales volume by the 2022 REAL Trends “America’s Best” list. Led by Jaime and Kendall Sneddon and including Ashley Howell Petraska and Haley Bise, the team generated $142,229,250 in dollar volume, according to a press release from WPSIR. The Sneddon Team has consistently ranked each year by REAL Trends as one of the top-producing teams in Connecticut based on closed sales volume. In addition, this year the Sneddon Team was named William Pitt Sotheby’s International Realty’s top-producing team company-wide, and Jaime and Kendall Sneddon each ranked #1 and #10, respectively, as individual agents in dollar volume company-wide, WPSIR said.

The New Canaan Building Department on May 20 issued an after-the-fact for 16 Park Place. A previous owner had enclosed a covered deck which now is recognized as a finished 180-square-foot interior room, the permit said. The homeowner paid $575 in fees for the permit.

The town on June 16 issued a permit for $75,000 of work to be done at 162 Main St. to prepare the commercial space for the Boba tea shop, “serving hot and cold drinks,” the permit said. 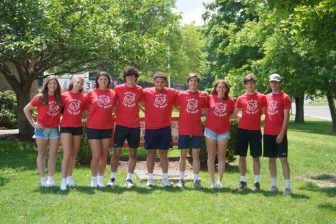 Congratulations to the New Canaan High School student athletes chosen by the NCHS Athletic Department (two per week) as “Rams of the Week” during the spring season. These athletes exemplified the department’s core values of responsibility, accountability, motivation and strength of character. Ram of the Week sponsors include Karl Chevrolet and Walter Stewart’s Market.

The Police Department Building Committee is looking at a “Town Hall option” where the 1927-built structure on South Avenue would keep its street-facing facade while being rebuilt at the back (as Town Hall was), First Selectman Kevin Moynihan said during the June 15 Town Council meeting.

The salary for New Canaan’s emergency management director, a new full-time position in the town, is $127,234.17, according to the town’s Human Resources Department. Russ Kimes has been hired in the position, officials said. 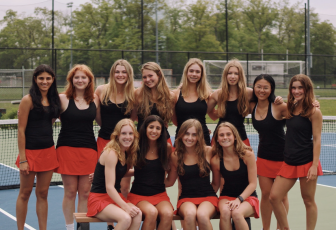 Finally, we received this write-up on the NCHS Girls Varsity tennis team:

“The NCHS Girls Varsity Tennis Team had an incredible spring season, posting an impressive 12-3 regular-season record. Coach Catherine Walker, who is in her fourth year of coaching the team, was very pleased with both her returning players and the influx of new talent, which was key as the team lost half of its players to graduation last year. The team was led by tri-captains junior Lexi McCall (#1 singles), senior Julia Gjertsen and junior Serena Platt (#1 doubles team). A trio of sophomores completed the singles lineup with Liza Sieghart (#2 singles), Layla Zuwiyya (#3 singles), and Annika Khurana (#4 singles). Doubles team members were junior Sophia Doshi and sophomore Claire Pellegrino at #2 doubles with freshman Christina Carr, freshman Amy Meng, sophomore Bryn Olafsson and junior Avery Morawa all contributing to the #3 doubles slot. Season highlights included 4-3 victories over Wilton and Fairfield Ludlowe, with Khurana securing the victory in each, earning her both Ram of the Week and Ruden Report Honors. The team beat Fairfield Ludlowe 4-3 in FCIAC’s with Doshi and Pellegrino icing the victory, then the squad fell in the semi-finals to Darien, the eventual champion. The squad faced Fairfield Ludlowe yet again in team CIAC’s winning 6-1, then lost in the quarter-finals to Amity, the eventual runner-up. McCall and Sieghart were both invited to the individual singles CIAC tournament where McCall won her first match but lost a close second match. Sieghart played tough and won her first two matches, then lost to the #1 seed from Amity. Gjertsen and Platt were invited to the doubles CIAC tournament and won three matches to reach the semi-finals, but lost to Darien in that round. For their regular-season performances, Gjertsen and Platt received 1st Team All-FCIAC honors and McCall received 2nd Team All-FCIAC honors. Given their success in the individual CIAC tournaments, Sieghart, Gjertsen and Platt were each named to the 2022 Connecticut All-State tennis team. Coach Walker was incredibly proud of her players especially because there were so many close matches and, as the team is only losing one senior this year, she is very optimistic about next season.”