New Canaan Police at 8:17 p.m. Tuesday received a report of a laptop stolen from an unlocked vehicle in a driveway on Weeburn Drive. 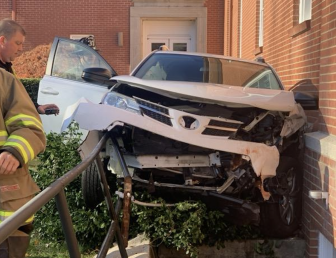 A motor vehicle crashed into the United Methodist Church shortly after 9 a.m. Tuesday. It came through the Hathaway Common parking lot and traveled through the hedge separating the condos from the South Avenue church property before coming to rest, onlookers say.

According to a property transfer recorded Nov. 3 in the Town Clerk’s office, an individual transferred 1217 Oenoke Ridge (with no money exchanged) to an entity called “Lion Tiger Bear and a Monkey LLC.”

The Board of Education on Monday by a 7-2 vote elected Dan Bennett as chair, and unanimously elected Katrina Parkhill as vice chair and Erica Schwedel as secretary.

Centerline—the company that First Selectman Kevin Moynihan said he would ask to update its report on coverage in New Canaan as part of an effort to erect a cell tower behind West School—shut down more than three years ago after filing for bankruptcy.

Courtney E. Sacchetti has been appointed to the position of executive vice president, CFO at Bankwell, reporting to President and CEO Christopher R. Gruseke. She served for the past six years as director of financial planning & analysis for the company.

Police are investigating a report received at 3:46 p.m. on Nov. 4 of cash missing from a Shadow Lane residence. 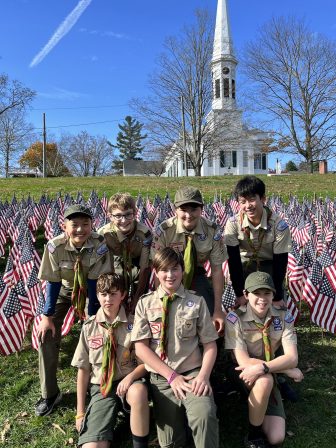 Members of Scouts BSA Troop 45 on Nov. 5 helped the local VFW Post 653 place 600 U.S. flags on God’s Acre in advance of the Veterans Day ceremony, to be held Friday. Details of the ceremony are here. Note: The 10:45 a.m. ceremony has been moved inside from God’s Acre due to rain.

Police at about 5:41 p.m. on Nov. 4 received a report of a cellphone stolen from a package delivered to a Millport Avenue residence.

The New Canaan Athletic Foundation’s Annual Bash will be held 6:30 to 10:30 p.m. on Nov. 22 at the Country Club of New Canaan. Details here.

The Registrars of Voters will conduct a recanvass of local districts 1, 2 and 4, which encompass state Senate District 36, along with the related absentee and Election Day Registration or “EDR” votes, at 10 a.m. next Monday in the large second-floor meeting room and glass conference room across the hall at Town Hall. It’s part of a multi-town recanvass because less than 1% of the vote separated state Sen. Ryan Fazio (R-36th) and Democrat Trevor Crow in their race.

Speaking of the election, Moynihan appears to be heeding the advisory opinion that the town’s Ethics Board issued in May following a months-long investigation that stemmed from the 2021 municipal election. The appointed body found that “an appearance of impropriety” had been caused when Moynihan used his elected title and official-looking letterhead in an endorsement letter that the volunteer Republican Town Committee then sent to new voters in the days prior to the municipal election last year. In its May 12 Report and Determination, the Ethics Board found that in the future, such a communication “will presumptively be considered a use of a Town asset and/or a Town position,” rising to the level of a Code of Ethics violation. Moynihan and the RTC sent no such letter in the run-up to this year’s midterm election. 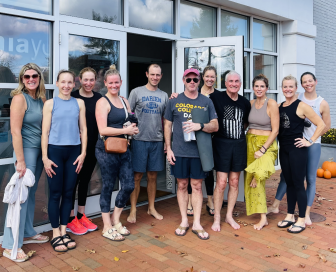 Participants in “Yoga To Support Our VFW” following a class held Nov. 7 at Kaia Yoga. Contributed

The grassroots Yoga To Support Our VFW effort that ran Sunday to Thursday raised $2,655 for VFW Post 653 in New Canaan.

Police at 2:50 p.m. on Nov. 5 received a report of a package stolen from a Chichester Road mailbox.

The Town Players of New Canaan is putting on “Joyful Noise”—”the true story behind Handel’s ‘Messiah’ ”—Nov. 18 to Dec. 4. Details here. All shows are at the Powerhouse Theatre at Waveny.

The New Canaan Chamber of Commerce announced this week that it’s opening sign-ups on its website starting at 10 a.m. next Tuesday for free gingerbread house kits. In all, 150 kits will be made available to local families to decorate and place in store windows through December. Those who reserve slots will be able to pick up their kits and store locations next Friday, Nov. 18. The kits are sponsored by Brown Harris Stevens. “If your family has participated in this beloved tradition multiple times, please consider taking a year off so that some other families can participate,” organizers said in a press release.

Bring the family to see Saxe Middle School’s production of “Madagascar, Jr,” a musical based on the Disney movie. A group of animals who have spent all their life in Central Park Zoo, end up in the jungles of Madagascar, and must adjust to living in the wild. Performances will be in the Saxe Auditorium, Friday, Nov. 11 at 7 p.m. and Saturday, Nov. 12 at 1 p.m. and 4 p.m. Tickets are $12 and can be purchased here.

NCHS Class of ’62 at its 60th reunion. Contributed

Finally, we received the following submission recently regarding a special reunion in town: “The NCHS Class of 1962 held its 60th Class Reunion on Sept. 24 at the Country Club of New Canaan. On June 18, 1962, 177 students graduated from NCHS.  Twenty-six members of the class, along with guests, returned once again to the location of our senior post prom party, as well as several earlier reunions. Of the 26, 11 attended New Canaan schools from Kindergarten through 12th grade. On Friday night several of the class attended the Rams football game, a victory under the lights at Dunning Field. And on Sunday morning most gathered again for brunch on Elm Street in town before saying our goodbyes—until next time. And ‘next time’ is in the works, September 2024 for the 62nd Reunion of the Class of 1962! The weekend was a total enjoyment, and the unity of the class was summed up as a classmate commented afterwards, ’It’s good to know that some things still felt warm and fuzzy after all of this time.’ ”