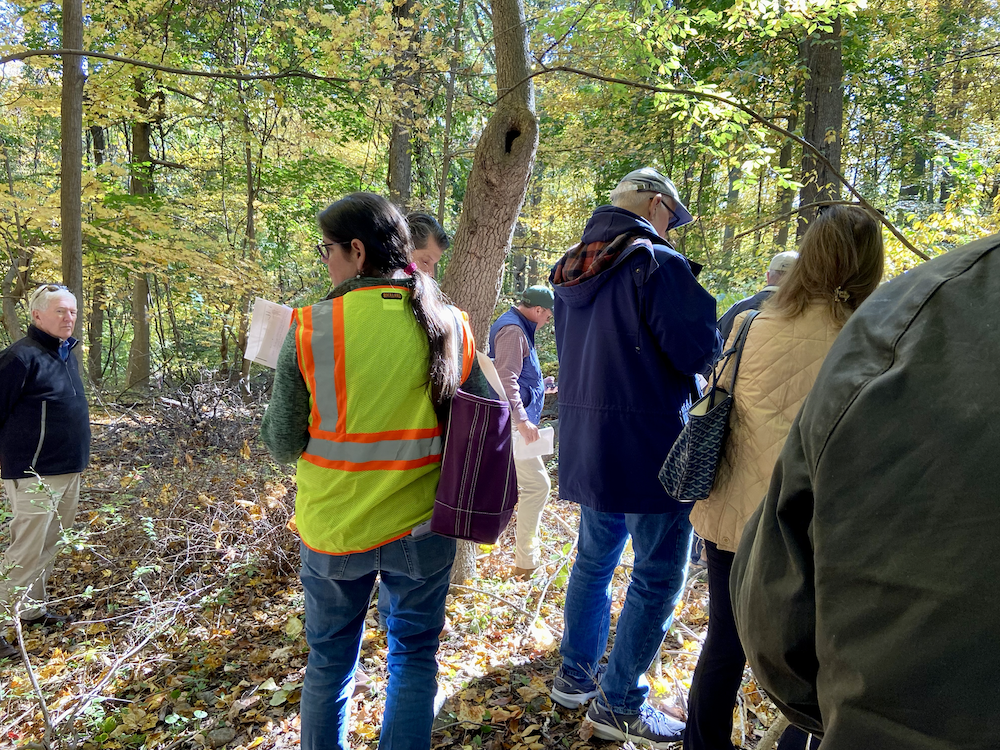 P&Z Oct. 21, 2022 site visit to the woods behind West School at 769 Ponus Ridge. Photo published with permission from its owner

The town is preparing to hire consultants to provide two studies to help municipal officials determine whether to move forward with a widely discussed plan to erect a cell tower behind West School.

Following recommendations that the Planning & Zoning Commission made during an Oct. 24 special meeting, the town is to get “independent” studies to establish cell phone needs in the area and the degree of health risk that a tower 900 feet behind West School (and 600 feet from its playing fields) will have to children there.

It’s unclear which consulting firms will be hired to carry out the assessments.

Regarding the coverage study, Selectman Williams last week tried to pin down First Selectman Kevin Moynihan about whether the Town Council or Board of Selectmen would make the decision, but Moynihan said only that he planned to ask a firm hired in the past—Centerline—“to update their report.”

When Williams suggested a firm other than Centerline do the independent study, Moyinhan said, “Centerline is independent” and that he has “no reason to think they’re not independent,” though if the Town Council feels otherwise, “we can take a different direction.”

Though several members of P&Z voiced opposition to locating a cell tower on school grounds, they narrowed the scope of their referral on Oct. 24 to whether or not the proposed infrastructure is consistent with a continuously updated document that guides planning in New Canaan—the Plan of Conservation and Development—and found that it does. During their public hearing prior to making a positive report with respect to the plan, P&Z heard from parents and neighbors concerned about public health and safety and unsightliness, among other potential problems, as well as the fire chief and others saying a tower is needed to help increase coverage for the data they need to receive and transmit when responding to emergencies.

P&Z Chair John Goodwin during the meeting said, “I think this is a very good site. I feel bad for the two neighbors where there is going to be access to the site. It’s a heavily wooded site. I don’t think anybody is going to see it.” Commissioners said details—such as with regard to height, screening and noise—can be made part of a future lease that the selectmen and Town Council would need to review.

The cell tower plan for West School emerged in public documents in June, drawing concerns from residents while Williams and Selectman Kathleen Corbet called for more community input regarding the plans. Williams had said it makes little sense to involve other municipal bodies, such as P&Z, if the Board of Selectmen itself is not in favor of the tower, since the selectmen would need to approve a ground lease with the town’s chosen consultant for improving cellular service, Homeland Towers, in any case.

Even so, Moynihan laid out an approvals schedule, and the first selectman himself requested the “8-24” referral from P&Z (a reference to the Municipal Improvements statute).

Corbet last week also noted that the town in the past put out a “town-wide survey” regarding coverage needs.

A survey that helps get a sense of demand “is pretty easy to do” and the last one is already 10 years old, Corbet said.

“I would recommend that part of the process is done,” she said.

On Saturday, she emailed Moynihan to follow up, saying “many of the same questions can be used” from the 2012 survey “as well as adding more current questions on demand, carrier usage, cell service satisfaction, etc.”

“I believe that the 2022 Survey will address residents’ concerns that the Town is lacking current information as well as provide the Town leaders with a good basis of information in order to help in our decision-making regarding the proposed West cell tower as well as future telecommunications plans,” Corbet said in the email. Those copied on it included Williams, Administrative Officer Tucker Murphy, Town Council Chair Steve Karl and Councilman Rita Bettino (it wasn’t clear whether Corbet blind-copied others).

“I would like to see the creation of the survey, distribution and responses before I make my decision at the BOS,” continued Corbet’s email, obtained by NewCanaanite.com. “I know that timing is important – especially for the TC who will be discussing this topic on Nov 16th – so the sooner we can launch this effort, the better. Perhaps this effort is already underway, and if so, that’s great and please confirm.  If not, with your approval, with whom may I work with in the Town to see that a new survey is developed, distributed and the results made publicly available?”

9 thoughts on “Town Officials Push for Studies, Survey Prior to Decisions on West School Cell Tower”