New Canaan Police are investigating the theft of a laptop, jacket, sneakers and air pods from an unlocked vehicle on Birchwood Avenue, reported at 5:54 p.m. Sunday.

Gunnar Esiason has purchased a home in New Canaan, according to a property transfer recorded Nov. 18 in the Town Clerk’s office. A cystic fibrosis and rare disease patient leader, Gunnar is the son of former NFL star and current “The NFL Today” analyst Boomer Esiason, who was named to four Pro-Bowls during his career and won the 1988 MVP Award with the Cincinnati Bengals.

The New Canaan Building Department on Nov. 17 received two demolition applications from the St. Aloysius Parish Corporation, for a ca. 1907-built house at 57 South Ave. and the 1956-built school at the same address. Together, the demos will cost about $775,000, the application said. 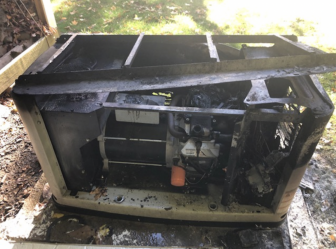 Aftermath of a generator fire in New Canaan. Photo courtesy of the fire marshal’s office

From New Canaan Fire Marshal Paul Payne: “Over the past few weeks New Canaan has seen two generator fires. These fires were both caused by corroded fuel plenums. I would urge all New Canaan residents with standby generators to have them serviced by a qualified service technician in accordance with the manufacturer’s recommendations.”

Grace Community Church is hosting Family Sunday at 9:30 a.m. on Dec. 4: Families with children of all ages are invited for songs and a family-friendly sermon, followed by a hot chocolate and holiday cookie party.

The Carriage Barn Art Center’s “Off The Wall” Art Benefit and Holiday Party will be held 6:30 to 10 p.m. on Thursday, Dec. 1. It’s the kick off to the annual “Deck the Walls” exhibit and wreath auction. Sponsors include Team Saxe + Bryan of Compass. Details here. 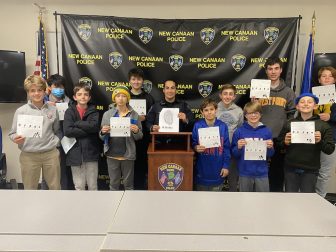 BSA Troop 45 organized a merit badge fingerprinting workshop on Nov. 17 at the New Canaan Police Department.  Boy Scouts from troop 45 and 31 were treated to an interactive and informative presentation by Community Impact Officer Nicole Vartuli. They also benefited from hearing Sgt. Aaron LaTourette share his experience as a Scoutmaster for a troop in Fairfield. “The boys are grateful to Merit Badge Counselor Kristie Breed who met with each one of them to make sure they had fully completed all the work expected of them for this merit badge,” the organization said in a press bulletin.

Police are investigating a report of items stolen from a FedEx dropbox on Grove Street, received at 9:34 a.m. on Nov. 16.

The New Canaan Health & Human Services Commission is urging residents to drive safely this holiday season. “If you or someone you know is struggling with drugs or alcohol, contact Al-Anon or Alateen at 1-888-825-2666.” More resources with HHS can be found here.

The Building Department on Nov. 9 issued a permit for interior work at 62 Main St. for A to Z Occupational Therapy LLC. The permit calls for $12,000 of work, including an open space area of 1,700 square feet partitioned into three separate spaces. 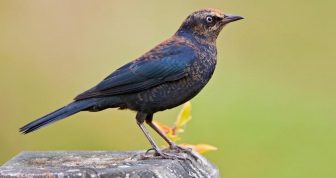 Bristow Park last week achieved an important milestone by identifying its 100th bird species bird—a pair of Rusty Blackbirds. “Many thanks to Frank Gallo of the Nature Center for reporting this record setting observation,” Conservation Commission Chair Chris Schipper said. He added that Bristow’s goal was to achieve 100 species in time for its 100th Centennial Celebration on Sept. 8, 2024. “As such, we have continued bringing this project in ahead of plan and on budget,” he said.

Bankwell is proud to again sponsor Wilton Rocks for Food, an annual music concert to benefit the Connecticut Food Bank and the Wilton Food Pantry. This year’s event will take place on Dec. 3 at the Wall Street Theater in Norwalk.

Finally, our thoughts are with the wonderful New Canaan Nature Center following the passing of Hedwig: