Additional appeal letter: “We double parked for 5 min to unload a car filled with skis and boots by our door verse parking ½ a block away to shlep heavy equipment. Trucks double park all the time. And are there longer than we are. We normally try and unload behind our shop but today there was WAY TO MANY cars parked on the side entrance. We have been respectful. The town has made it harder for shop owners to unload. The amount of construction everywhere is causing more of a traffic jam than us being double parked for all of 5 min. We are a store of women. I am not walking ½ a block to unload a car full of heavy stuff. UPS double parks, fedex, food trucks, Starbucks people. We did it once today! And we are being chastised. And literally 5 min. Arguing lasted longer than physically emptying the car.” 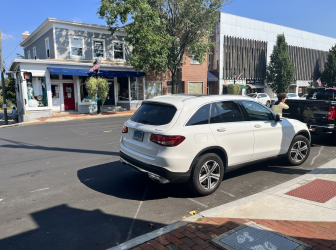 “It was an honest misinterpretation of the parking sign. I assumed it meant no parking beyond the sign, especially since there was a car parked behind me. This is my first ticket in New Canaan and I would appreciate it if it was voided. Or, I’d be willing to compromise and pay half. I will be more cautious of parking signs in the future.”

“I thought you had to change the parking spot after 2 hours. I set a timer and moved my car to a different spot. I got a ticket. I walked to the Town Hall right away to let them know. They explained that you must change spots and streets in order for the time to be reset. They saw that I did change spots today within the 2 hour window, but got a ticket because it was the same street. They also let me know. I was informed of this in 2016 but apparently forgot in the years since, did my best to follow the rules today, so hoping for a pardon.” 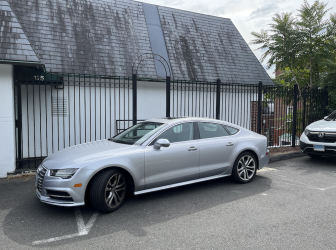 Blocking the gate at the alley behind Elm Street by Park Street Lot. BT photo

“I went to go pay a dollar in quarters in parking space 155 around 9:20 a.m. to buy me some time because all I had was a dollar in coins on me at the time machine was jammed so I was not able to pay I ran inside my job over at Lepain Quotidian to get 3 dollars in charge to park at the back spots where it is 3.00 dollars for 6 hours at 9:23 a.m. my ticket was issued. I did not have time to resolve call and complain about the machine or to even pay but I had all intentions to pay.”

“In 2019, after 6 years of waiting, we were informed by the paring bureau that my name had come up for the parking lot permit. We accepted, and paid for a full year and then COVID hit and I never ended up using the permit. This week I had to go into NYC for work and recalled my permit at the Lumberyard Lot. I parked and went to the City and found this ticket on my car. Upon calling the Parking Bureau, Stacy reminded me that my permit was inactive because I had opted to be put on a priority list. I have no recollection of this discussion & no email to confirm. All I know is that I am getting ticketed on a lot I should be allowed to park in.” (File at Parking Bureau includes July 2021 request to put be put on priority list.)

“Pulled up to new Canaan Toy Store (in front). Part of my car was in handicapped zone. I went in to get my Pokemon cards for my grandson—they were there & paid for. Was in 1-2 minutes blinkers on car running — I did not see ticket on car until I came out of Stewarts Market. It was there! I would appreciate any consideration you can.”

2 thoughts on “‘I’d Be Willing To Compromise and Pay Half’: Parking Ticket Appeals”