We got a heads-up on Twitter from New Canaanite Peter “The Bushman” Bush of The FOX 95.9 FM about a recently redecorated roof of The Veggie Barn on Cross Street. 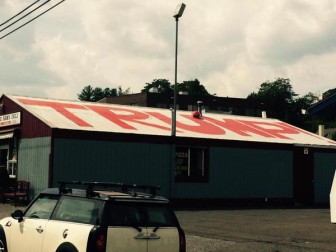 A look at the roof of the Veggie Barn on Cross Street on Aug. 31. Peter “The Bushman” Bush photo

Looks like town resident and Veggie Barn owner Santo Silvestro supports Donald Trump in ’16. Silvestro wasn’t immediately available for comment. The rooftop likely will be visible to any planes passing overhead. As Bush later Tweeted: “A little something for the Donald to see from 10K.”

While Peachwave on Forest Street did close last weekend as planned (though the team there decided last-minute to extend by one day, through Sunday), company officials tell us now that a reopening is possible. 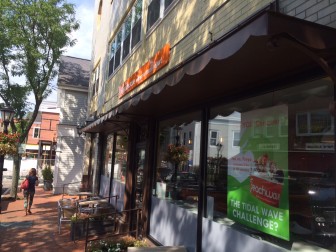 Gregg Roberts, president of a company that owns and operates area Peachwave outlets, tells NewCanaanite.com that he’s in talks with the landlord at 11 Forest St. about splitting the large space there in half, bringing a new tenant into what had been the back of the froyo shop while Peachwave would occupy the front. “At the end of the day, really we just bit off space-wise a little more than we could chew.” Meanwhile, local Peachwave workers have posted signs around town and snapped “Save Peachwave” photos with students and school officials. 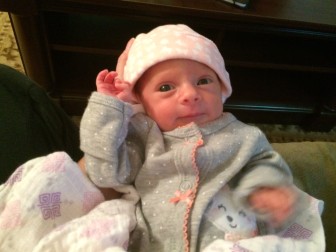 Congratulations to Kristina Barrett, a member of the Kiwanis Club of New Canaan and VP of financial development, marketing and strategic initiatives at the New Canaan YMCA, on the July 18 birth of her beautiful little girl, Morgan Ann Barrett.

This Friday is “11 cent scoop night” at Baskin-Robbins on Main Street, a thank-you from New Canaan’s wonderful Czech family for those who have supported their Mikey Czech Foundation. Mikey died in September 2008 at age 11 of an inoperable, incurable brain tumor. 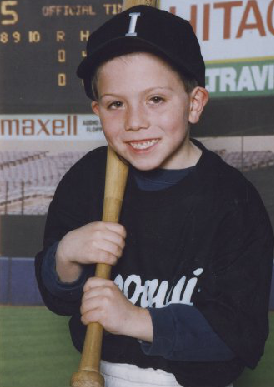 On 11 cent scoop night, the Czech family picks up the tab on the difference in price between what locals pay for ice cream and what it costs, and the night also is a fundraiser for the foundation, which is dedicated to pediatric brain tumor research. Mikey had been a member of what became the New Canaan High School class of 2015—read here how one of his classmates decided to honor him prior to graduation, in NewCanaanite.com’s single most-read article in all of 2014. 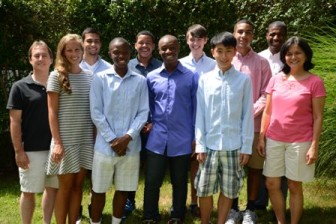 Another academic year underway means a new class of freshman coming into ABC House of New Canaan on Locust Avenue. We’re hearing the group had an outing at Rockin Jump up in Trumbull and that ABC’s annual fundraiser is planned for Oct. 3 at the Country Club of New Canaan. Stand by for more information on that.

How’s this for a photo of the final scheduled concert (there is one make-up day this Wednesday at 7:30 p.m.) of this summer’s outdoor concert series at Waveny, snapped Aug. 26 by Whitney Williams: 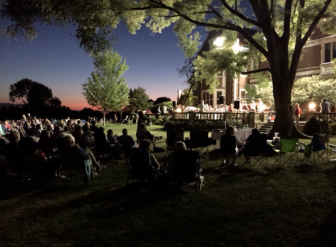 Outdoor concert series at Waveny on Aug. 26, 2015 — the last show of the season. Credit: Whitney Williams 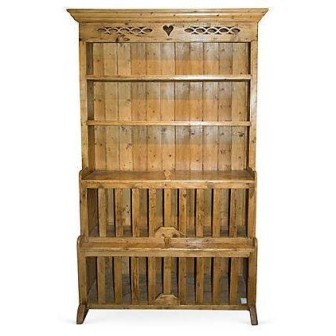 Craft’s listing for her collection says she “infuses the shop with her discerning, witty taste and will help you discover treasures from Mid-Century Modern, Traditional, Transitional, Oriental and Contemporary periods and styles.” 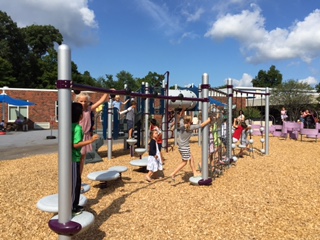 The South School PTC tells us that kids are loving the new play structure for the youngest students at the school. A prior wooden portion there had become a destination for carpenter bees and was torn down and then replaced with a brand-new playground. “The new structure features several climbing elements and play platforms, and a new slide and tunnel,” according to a press release issued by Julie O’Brien of the PTC. “There are several ways up and down so kids can explore multiple levels and routes around the equipment. In addition, an obstacle course was added featuring various challenges including overhead bars, squiggle knots and wobble pod bouncers.” South School Principal Joanne Rocco said in the press release: “We are so excited to have a new, safe playground for our kindergarteners to use each day. Keeping the students active and engaged during recess is important for social, emotional and physical reasons.” 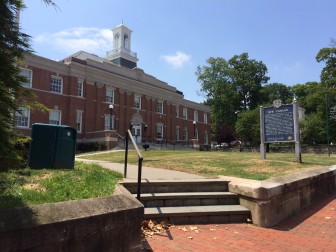 Here’s the schedule for the dedication of the new New Canaan Town Hall, to be held 1 to 4 p.m. on Saturday, Sept. 12:

The Town Hall was built in 1909. The renovation and addition were launched several years ago. The project has been completed successfully on time and under budget. As of September 2015, all town offices will have been moved into three different levels at Town Hall from various temporary locations.

“New Canaan residents will not want to miss the chance to see the beautiful restoration that has been done of the original 1909 Town Hall and the modern addition that was designed with strict attention to the lines and flavors of the original,” said Town Hall Building Committee Chairman Michael Avgerinos. 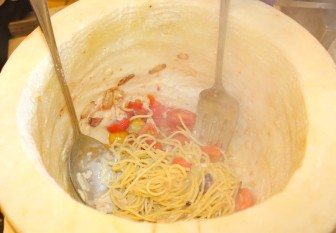 Top New Canaan dish of the summer—according to Terry—was the Spaghetti alla ‘Sciué sciué’ at Barolo. This plate of handmade pasta mixed with red and yellow cherry tomatoes, garlic and white wine, finished off in a wheel of pecorino is prepped tableside and is sure to turn some heads. It’s especially delicious now with the tomatoes currently in season.

Finally, the New Canaan Democratic Town Committee is inviting residents to its 12th Annual Barbecue, to be held 12 to 3 p.m. on Sunday, Sept. 13th, rain or shine, at Kiwanis Park. Funds from the BBQ are used to support Democratic Party principles and activities in town, including get-out-the-vote initiatives. Tickets are $40 in advance, $50 at the door and children under 17 are free. For those who wish to be Premium Supporters, joining the Leadership Circle, the donation is $80, further supporting the Committee’s work on behalf of the Democratic Party. Tickets may be purchased online at www.newcanaandemocrats.info, or from members of the Democratic Town Committee. For further information e-mail the Committee at bluecanaan@gmail.com.