The owner of a Weed Street home has applied for an after-the-fact permit to demolish a ca. 1830-built barn on the property. 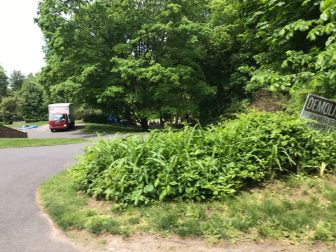 A demolition sign is posted outside 694 Weed St., where an after-the-fact demo permit is being sought for an approximately 190-year-old barn. Credit: Michael Dinan

Kimberly Quinn on May 10 filed an Application To Demolish an “accessory barn located in rear of the property” at 694 Weed St. with the New Canaan Building Department, according to a copy of the application on file at Town Hall.

In a March 30 letter to the Building Department that forms part of a file reviewed by NewCanaanite.com through a public records request, Quinn said she had been planning to renovate the 192-year-old barn but found “extensive termite damage as well as foundation issues.”

Quinn hired New Fairfield-based Alexander & Sons Contractor LLC as general contractor on the project and decided to have that company also carry out the demolition, she said.

“Due to the instability of the structure and the nature of the demo (use of hand tools compared to machines), it was in my interest to have Alexander & Sons Contractor LLC do the demolition and not hire a separate company that specializes in demolition work,” Quinn said in the letter. “I am respectfully asking for a waiver of providing a demolition license in the application. My primary residence is on the same lot as the renovation and I have been there on a daily basis to oversee the work in its entirety.”

According to a March 21 Letter of Authorization from Quinn authorizing a separate company— Rego Park, N.Y.-based Urban Integrations—to oversee the demo, “[t]he existing structure was in a condition that the structural integrity was compromised.”

“The framing had severe termite damage that left critical structural elements with limited strength capacity,” Quinn said in the letter. “Portions of the foundation didn’t properly support the structure and will need to be reinforced. The entire framing will be removed along with foundation footings that are not in suitable condition for the new structure. The barn will be rebuilt to represent the original existing structure. Plans for this portion of the project have been submitted to the town of New Canaan.”

Yet the head of Urban Integrations, Danny Trujillo, said in his own March 30 letter to the New Canaan Building Department that he didn’t know Quinn was having the barn demolished by the contractor.

“During an initial visit to inspect the existing conditions it was noticed that there was termite damage in the framing of the exterior walls and interior columns,” Trujillo said in the letter.

It continued: “In addition to termite damage, portions of the structure were not attached to the foundation monolithically. There were also columns that were not properly tied to a footing when expansion of the structure was completed in prior years before Kimberly Quinn purchased the home. As the winter progressed, Kim contacted me to discuss concerns regarding the condition of the structure. I visited the site in early January of this year to inspect. I noticed that the building was out of plumb a significant amount compared to the initial inspection. The windows were also separating from the exterior siding. The interior showed signs of the 1st floor and 2nd floor walls separating, a condition called racking. I recommended to salvage any structural elements by shoring the framing. I submitted plans to reflect this change. On March 15th 2022, I received an email from your department stating that the structure was entirely down, which I was unaware of. I completely understand that steps were out of order regarding this process. It was never my intention to do this without consulting the Building Department. In my professional opinion, the structural condition was worsening, with additional loads such as snow, it could have compromised the building. Initially I could have reached out to your Department to avoid this sequence, I didn’t think the result would be taking down the structure entirely. At this point of time, I do strongly feel that the demolition was warranted to avoid a collapse and ensure the safety of the workers doing the renovation. I also feel that for years to come, a newly framed structure will also ensure the safety of the occupants as well. We are currently preparing the demolition permit application. Going forward I have advised to stop all work until permits have been processed.”

It isn’t clear how the town will handle the after-the-fact demolition permit that’s been submitted, or any future building permit application for a new barn structure. Under Chapter 541 of the Connecticut General Statutes, the State Demolition Code is administered by the local building official and a permit is needed to “demolish any building, structure or part thereof.” Anyone who violates the provisions of the Demolition Code “shall be fined not more than five hundred dollars or imprisoned not more than one year or both,” under state law.

The statute was invoked four years ago in the case of a non-permitted partial demolition of a pre-American Revolutionary War home on White Oak Shade Road.