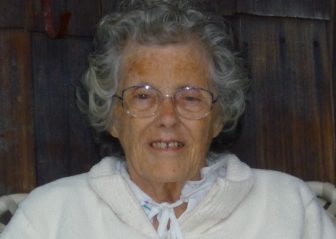 She was born on August 2, 1931, to the late Charles and Ellen (Doyle) Nagot. A lifelong resident of New Canaan and member of St Aloysius Parish, Eileen graduated from New Canaan High School in 1949.

Growing up she very much enjoyed Girls Scouts and continued through the Mariner program. On June 16, 1951, she married John “Jack” Apy and began a family.

Eileen worked as a buyer/manager at Young Fashions and went on to be the scheduling secretary at Silver Hill Hospital. She was a very active volunteer and over the years was involved with Welcome Wagon, Girl Scouts, Democratic Town Committee and a Member of Zoning Board of Appeal.

She loved entertaining and her house was always open to friends and family.  She also enjoyed her family vacations to Massachusetts and Nova Scotia and especially her trip on the QE2 to Scotland and a trip to Ireland. Another highlight for her was when she and Jack attended JFK’s inauguration and all the festivities in 1961.

She was predeceased by her husband Jack, her sisters Hilda and Judy and her daughter Janet Shelley.

Donations in her memory may be made to the We Stand With Christ Building Campaign at St. Aloysius Church or New Canaan Volunteer Ambulance Corps.