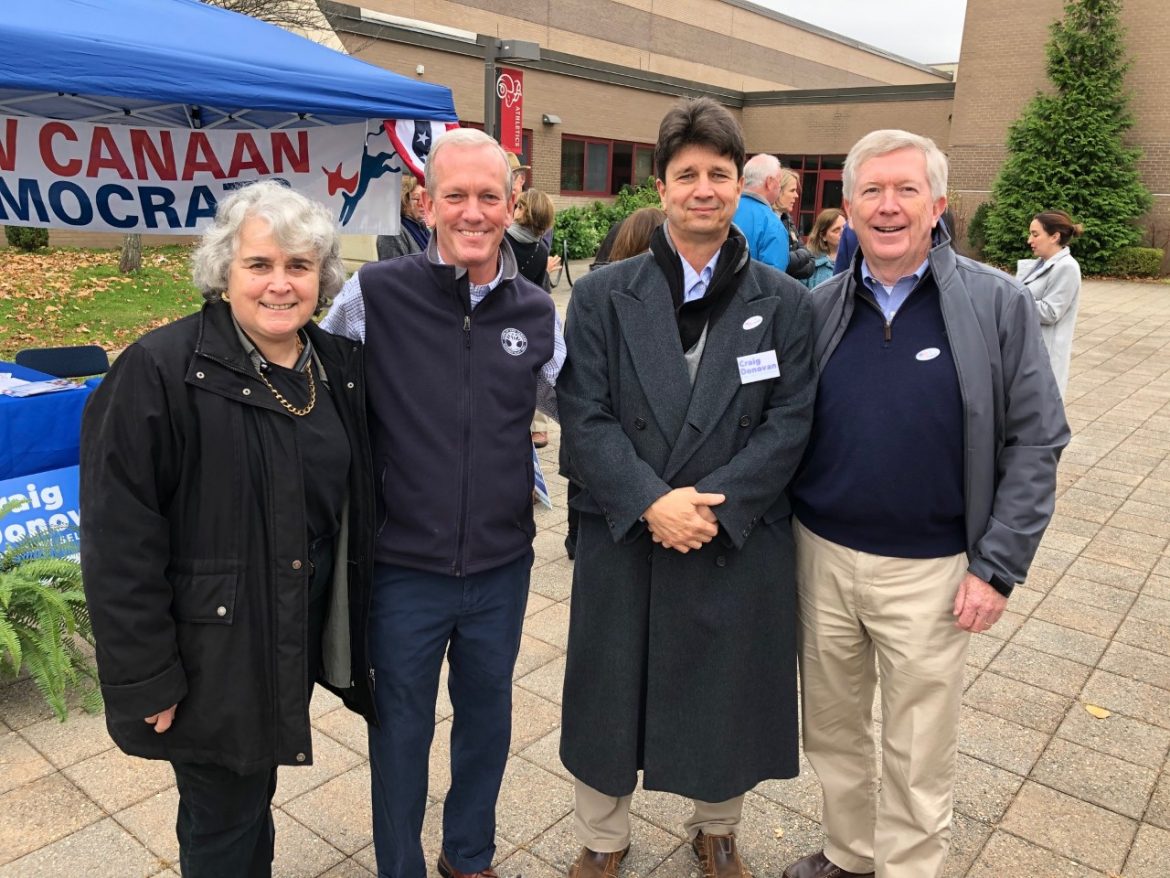 Candidates for elected office in New Canaan greeted voters outside polling places at New Canaan High School and Saxe Middle School on an overcast, crisp Tuesday morning, saying they were seeing a strong turnout and hoping for good results. 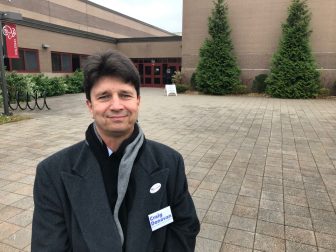 Craig Donovan, a Democrat challenging incumbent Republican First Selectman Kevin Moynihan for New Canaan’s highest elected office, said it was “wonderful to be here and say hi to everybody, meet all the good people and just enjoy what the best part of what America gives us, a chance to vote.”

“I learned a lot from so many people and I am still getting people coming up to me with their ideas for how this could be a better town, so it’s been a wonderful experience,” Donovan said. 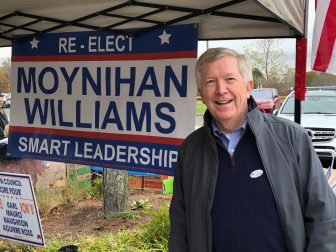 Moynihan said he was feeling tired but optimistic that New Canaan is turning out a big vote.

As of 4 p.m., the number of voters who took to the polls was higher than the total who voted on Election Day in the tightly contested race of 2017 (see table below), when Moynihan earned 33 more votes than his Democratic opponent, Kit Devereaux, to win election to his first term. 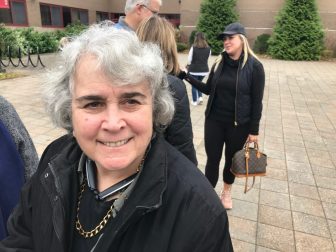 Selectman Kit Devereaux, Democratic incumbent member of the Board of Selectmen, outside the polling place at New Canaan High School on Election Day—Nov. 5, 2019. Credit: Michael Dinan

Asked how she was feeling about Election Day this year, Devereaux, who is seeking to retain her seat on the Board of Selectmen, said, “There are a lot of people who have come out to vote, and that’s what counts.”

Her counterpart on the Board, Republican incumbent Nick Williams, said he was “feeling great” despite some allergies to the fallen leaves that dotted the areas around the GOP and Democratic tents set up outside the auxiliary gym at NCHS. 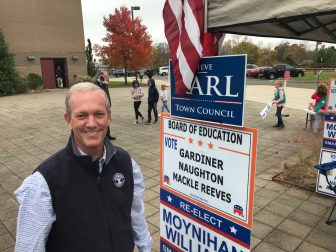 Selectman Nick Williams, incumbent Republican member of the Board of Selectmen, outside the polling place at New Canaan High School on Election Day—Nov. 5, 2019. Credit: Michael Dinan

“Look, I think our message has gotten out there,” Williams said. “I think it’s the right message. I think we’ve made New Canaan a better town, between natural gas, solar, having a negative budget. I think our message is a really strong one, so I would hope that people act upon that message.”

This year’s election has seen several political newcomers throw their hats into the ring.

Republican Bob Naughton, who is seeking election to the Board of Ed, said voter turnout seemed pretty strong in the morning and that he was hopeful. 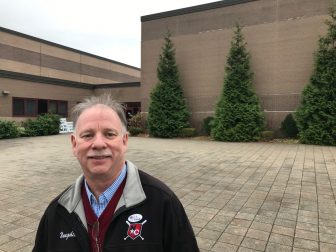 Asked how he felt his campaign had gone, Naughton said, “Overall I feel it went well.”

Democrat Steve Eno, a Board of Ed candidate who also is running for the first time said he “learned a lot” during the campaign.

“And I hope that I can continue making changes,” Eno said.

Town Council incumbent Steve Karl, a Republican and past vice chairman of the legislative body, said he felt “a ton of energy” at the polls. 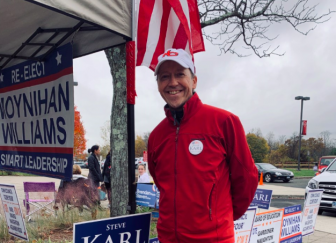 “It’s been a lot of fun to catch up and see so many friends and supporters,” he said. “The weather has cooperated and the turnout seems brisk so far.”

Colm Dobbyn, a Democrat who is seeking a Town Council seat, said he was feeling “pretty good” on Election Day.

“I feel like I put a good effort into it, and I feel like the whole Democratic team did,” he said. “So we think the turnout is looking pretty good and I’m optimistic.” 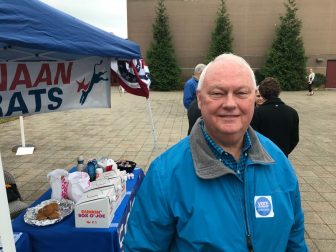 Republican incumbent Cristina A. Ross also said she was optimistic.

Robin Bates-Mason, a Democrat running for Town Council and public office for the first time, said she felt tired. 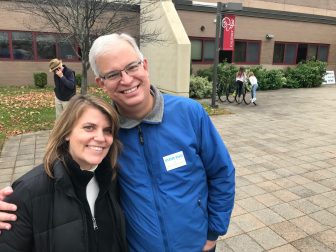 “I’m a little nervous, I don’t know,” Bates-Mason said. “Whatever happens, happens. It’s been an interesting run. We’ll see how it goes.”

Others running for elected office are Republicans Mike Mauro and Maria Naughton, and Democrat Mark Grzymski, who are seeking election to the Town Council. 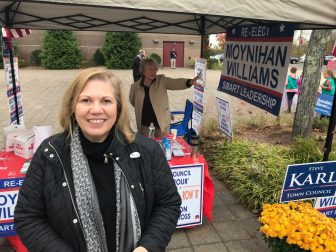 Voter turnout in New Canaan picked late Tuesday morning to reach the very high levels achieved two years ago, data show. As of 4 p.m., 3,718 ballots had been cast, 67 more than at the same time on Election Day two years ago, New Canaan’s last local election. The figures do not included absentee ballots.

New Canaan voters on Tuesday will cast ballots in a municipal election that includes multiple contested races. Polls are open 6 a.m. to 8 p.m. What follows is a digital voter guide. We’ll update this post throughout the day with information on voter turnout and check-ins with candidates.

Those who reside in voting district No. 1 in New Canaan, covering the western and northern parts of town, cast ballots at New Canaan High School. All others vote at Saxe Middle School. Here’s a voting district map. And here’s a website to help find your polling location if you’re still unsure.

Here’s a podcast with Kathleen Corbet that reviews the ballot and how New Canaan’s elected bodies are formed. A sample ballot may be viewed here. The Town Clerk’s office at Town Hall handles all absentee ballots. The Registrars Office handles Election Day registration.