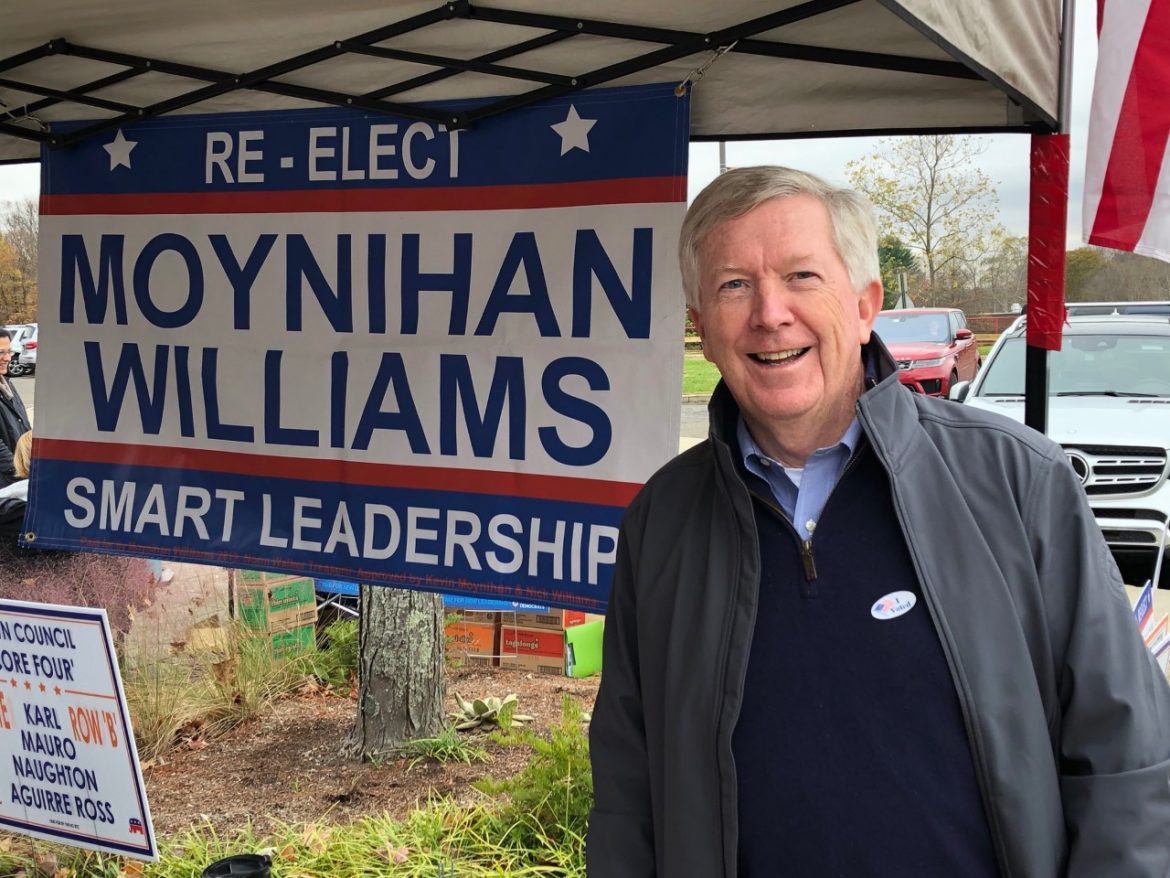 Running on a platform of progress in areas such as commuter parking and cellular service, the Republican incumbent and retired corporate attorney held off a challenge by Democrat Craig Donovan by a count of 3,381 votes to 2,163, according to tabulations not yet verified by local election officials. (The figure does not include same-day registrants or the recounting of about 60 District 1 ballots.)

Interviewed by NewCanaanite.com, Moynihan said he was “thrilled” with the outcome.

“I am very pleased to have such a wide margin this time compared to last time,” he said. “So I think it’s a convincing victory and … that generally people said they like the way the town is running.”

Donovan, a university professor who has trained government officials, called for New Canaan town government to be more widely representative and for the first selectman to garner greater public input and find agreement in areas such as the expansion of natural gas and cell service.

He said that as a result of the election, New Canaan is “well awoke.”

“All the voters in town are now tuned into the future of New Canaan,” Donovan said, adding that he is “proud to be a part of that.”

Moynihan’s GOP colleague on the Board of Selectmen, Nick Williams, earned 3,155 votes compared to Democrat Kit Devereaux’s 2,384 (again, the figure does not include same-day registrants or the 60-odd recounted District 1 ballots). Both will serve with Moynihan on the bipartisan body.

New Canaan Republicans staved off an attempt by local Democrats to pick up seats on the Town Council and Board of Education. Incumbent GOP Councilmen Cristina A. Ross, Steve Karl and Mike Mauro were re-elected to the legislative body, and voters also elected Board of Education member Maria Naughton onto the Council. Political newcomers Robin Bates-Mason and Mark Grzymski also were elected to the legislative body, with fellow Democrat and longtime Inland Wetlands Commissioner Colm Dobbyn being the odd man out.

In the Board of Ed race, Republican Julie Mackle Reeves was the high vote-getter, followed by GOPers Carl Gardiner and Bob Naughton. Chairman Brendan Hayes was re-elected and his fellow Democrat, Steve Eno, was the low vote-getter and odd man out in that race.

Here’s a snapshot of voting results:

Source: Registrars of Voters
Note: These figures are not yet final and do not include same-day registrants
*indicates winners

Voters turned out in very high numbers at the polls. Preliminary figures showed that about 6,000 total ballots had been cast. Here’s how that compares to recent years:

Unaffiliated voters now make up roughly one-third of New Canaan’s electorate, according to data released by the registrars. Though New Canaan in last year’s state elections saw three of four GOP-held seats in the General Assembly flip to Democrats, this town voted for all four Republican candidates in those races. The only one who won was Tom O’Dea (R-125th), a New Canaan resident. Here’s a breakdown of the electorate: