When New Canaan resident Noriko Hiraga’s Chow Chow died at 15, a rescue group for the ancient breed asked if she’d take on another one, from Long Island—and she said yes.

Meet ‘Emi,’ a Japanese female name that means “Bountiful Beauty,” Hiraga said. Emi was five at the time of her move up to New Canaan and is now around 13 years old. 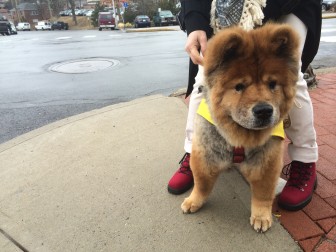 Though the Chow Chow has become quite arthritic in the last three years, Emi still enjoys walking downtown—this day in a raincoat—and likes to break up a stroll with a favorite New Canaan pastime, Hiraga said.

“She likes to smell every one of the planters,” Hiraga told NewCanaanite.com on the corner of Park and Cherry, where we met Emi. “That’s her favorite activity.”

Hiraga herself has lived in New Canaan for 25 years. In her eight or so years living with Hiraga, Emi has learned her owner’s habits. 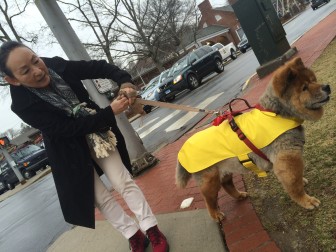 New Canaan resident Noriko Hiraga with her Chow Chow, Emi. Emi is about 13 years old, and though she's grow quite arthritic in recent years, she enjoys walking in the village center of New Canaan, especially smelling planters.

“She seems to know a lot about things around the house, my pattern of daily life and when I’m working, not home, a dog walker comes and takes care of her,” Hiraga said. “And she knows all of that routine, so when it’s about time that something should be happening, she’ll kind of look at me like, ‘Are you ready? Are you going to do that?’ She really seems to know a lot.”

“You know how children pet? She doesn’t react. She’s good.” (Note: Officials in New Canaan have urged owners of dogs that aren’t good mixers with other canines or with people to try tying a yellow ribbon or bag around the dog’s collar to let others know.)

Emi’s doc is Dr. Charles Duffy of Norwalk Veterinary Hospital, and she gets a special diet, Hiraga said.

“I have to make her food now because she has a hard time digesting the dry food,” she said. “I do a mixture of chicken, rice porridge, cooked string beans and a little bit of canned pumpkin.”