A grassroots event launched four years ago by town resident Doug Zumbach—owner of the eponymous, gourmet coffee shop on the corner of Grove and Pine Streets—Caffeine & Carburetors has become popular enough that, under its founder’s direction and with support from town officials and the New Canaan Chamber of Commerce, it’s grown into an inclusive community occasion.

Zumbach—owner of a 64 Plymouth Fury, ‘72 Porsche 911T and ‘77 Porsche 930 Turbo—told NewCanaanite.com that he’s parking one of his own cars in front of the iconic clock midway up the main drag of Elm Street, a spot that will bookend a line of cars that will run the length of Pine and then, for the first time, jag up Park and then down Elm. 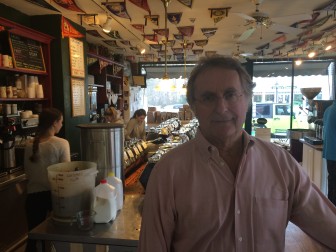 “I want a certain continuity, a flow for the show,” Zumbach said.

“I want a visual continuity as well as physical cars to be down there [on Elm]. Mine is going to be there. As people arrive, they make that identification: That’s a cool car.”

When Park hits about 75 percent full—and the first among those driving their vintage and specialty autos get to New Canaan arrive before 7 a.m., though the event officially runs 8 to 11:30 a.m.—police and volunteers will start directing cars to the spaces in the lot opposite Park Street, then up the small stretch of Park itself and down Elm, to the clock.

Chamber Executive Director Tucker Murphy said CERT volunteers will be manning all intersections along the route and that spectators are urged to park in one of four spots:

The train station also has two bathrooms, and spectators are encouraged to use those, Murphy said.

Several businesses jumped on the chance to invite some of the foot traffic into their storefronts, often opening up on a day they wouldn’t or at least earlier than usual. (A list of giveaways, points of interest and specials from our village center merchants, supplied by Murphy, can be found at the end of this article.)

Participating businesses aren’t limited to those located physically along the vintage car corridor.

“It’s hot chocolate where you melt killer chocolate into whole milk with heavy cream and some salt,” she said. “It’s delicious.”

Asked what prompted her to participate in the event, she said: “I know Doug, and being in New Canaan I have just seen this thing grow. It was crazy here last time. I’ve been in the restaurant business, I love this little town, I’m working with the inn. We have a great place up here, it’s like a vacation out of town. I want people to feel they’re being pampered. It’ll be fun.” 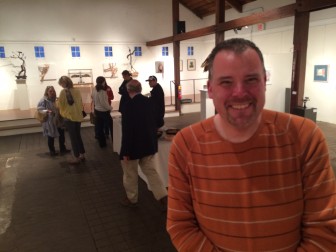 Shawn Webb, Chow Chow owner and manager of Ten Thousand Villages down on the corner of Main Street at East Avenue, said he’s opening at 8 a.m. (not the usual 12 p.m.) to offer 25 percent off any one item for event spectators and he’ll be walking around passing out fliers promoting the special.

“I think if all the merchants do it and band together and make an even larger event out of it than it is, in itself, then it’s a great opportunity for all of us,” Webb said.

Zumbach said he thought some merchants were taking a “wait-and-see” attitude “and they may just open up.”

“Unlock the door and open up when they see people,” he said. “They don’t want to miss an opportunity. And this is the reason I am doing this. Bring these people into this community. Help the community.” 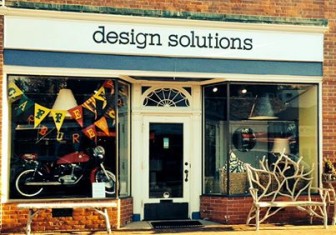 design solutions is getting "revved up" for Caffeine & Carburetors, which will expand this year onto Elm Street. First event: April 6. Credit: Terry Dinan

Here’s a quick list of participating businesses, in alphabetical order by name: