New Canaan residents say they’re pleased with the town’s efforts and believe that it is an improvement over the narrow grass verge that had paralleled Weed Street in terms of aesthetics, use and safety. 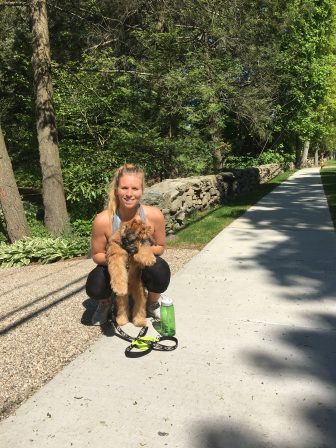 New Canaan resident Kristin Redaelli, while pushing her child in a stroller on Wednesday morning, said that the sidewalk is a major improvement.

“It’s very convenient, safe for kids, and great to get to town now,” she said. “[On the grass], it was harder to push a stroller. Often times, I would have to jump on the road, and then I was a little nervous with the cars because they were going pretty fast.”

Kelly Leather, who was walking her dog, said that the sidewalk allows her to feel safer. 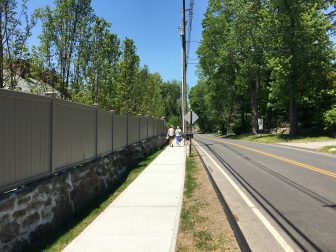 “I used to run but you were always scared you’d get hit by a car, so it’s nice and doesn’t interrupt your pathway or your run,” she said. “I just got a new puppy so it’s really convenient to walk to Irwin Park and to feel safe walking with him.”

Some residents also believe that the sidewalk has positive visual effects as well.

While the sidewalk itself has brought pleasure to many New Canaan residents, with it has come complaints due to a large white sign next to it, at the corner of Elm Street and Weed Street. 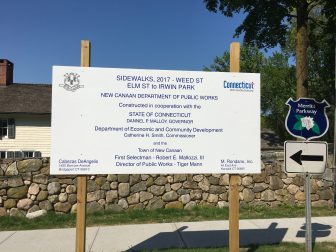 The sign credits both the town and state for the construction of the new sidewalk. Credit: Sam Stoner

The sign itself credits not only the New Canaan Department of Public Works, the municipal agency that advocated for and oversaw the project, but also the state of Connecticut. It’s there because the Connecticut Office of Policy and Management last summer awarded New Canaan a $150,000 grant for the project.

At Tuesday’s Board of Selectmen meeting, officials noted that many people are asking when the large sign will come down. 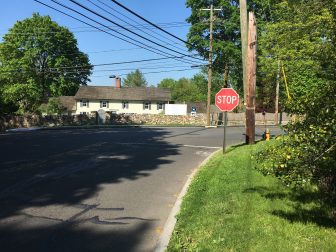 “The governor is commending himself for using our money,” Selectman Nick Williams said.

Told that putting up the sign is standard practice when state funds go into a project like this, including under past governors, Williams said: “Except other governors didn’t put the state in bankruptcy.”

Public works officials believe that the sign needs to remain in place while other projects are still underway.

Director of Public Works Tiger Mann said that New Canaan still has more sidewalk to install on Weed Street—namely, from the corner of Wahackme Road running north to where New Canaan Land Trust officials envision a hook-up with what’s been referred to as a “greenway”—a walk-able loop that runs into the town’s New Canaan Nature Center property. 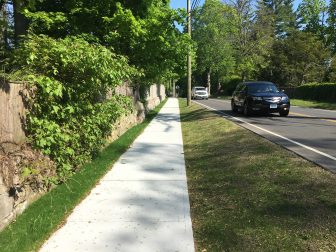 The sidewalk runs parallel to Weed Street, replacing a rough stretch of grass previously used to get between Elm Street and Irwin Park. Credit: Sam Stoner

“Right now we’re asking the state to extend the contract to be able to do the crosswalk at Mead and Wahackme in order to finish the loop to get to the Land Trust [and] to get to the Nature Center, so I don’t want to take the sign down with the thought that it might aggravate the state,” Mann said at the selectmen meeting, held at Town Hall.

Meanwhile, local people are enjoying the pedestrian-friendly connection between downtown New Canaan and Irwin—a goal of the updated Plan of Conservation & Development.

He noted that the route has been made more safe with the sidewalk, including for kids who used to ride their bikes in the heavily used street.

“It increases the opportunity to use Irwin Park, and enjoy the fruits of New Canaan,” he said.

Town officials voted to approve the construction of a new sidewalk running from Elm Street to Irwin Park earlier this year.

—Michael Dinan contributed to this report

One thought on “‘Enjoy the Fruits of New Canaan’: High Marks for New Sidewalk Connecting Elm Street to Irwin Park (That Sign, Though)”