After an up-and-down 2015 campaign that saw the Rams finishing with a 7-13 record and missing the State playoffs by one game, the goal for New Canaan softball is very clear heading into the 2016 season. 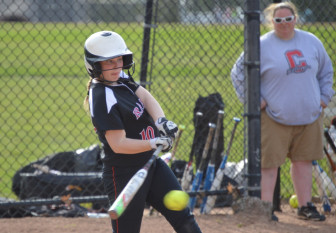 Rachel Keshin connects for one of her 5 hits on the day as New Canaan defeats Bridgeport Central 13-6 on April 15, 2015. Credit: Terry Dinan

With only two players having graduated last spring, a return to the FCIAC and State playoffs is not expected to be too far of a reach for this year’s squad. Even with the additional loss of would-be senior captain Claire Conley—the last member of the 2013 FCIAC Championship team—who switched over to track this spring, the number of returning starters should keep the Rams in contention in what should be a wide-open conference this year.

If New Canaan is going to fulfill their promise in 2016, they’ll be doing it without any named captains this season. With that said, head coach Danielle Simoneau sees the vacancy as an opportunity for some of the younger varsity players to step up and fill the leadership role, as the Rams look to return to postseason play for the fifth time in her six years as New Canaan’s head coach.

“When you name captains and designate titles to specific individuals, others who want to step up or contribute in some way feel that they can’t,” Simoneau told NewCanaanite.com. “So when you just designate that the juniors will become leaders, we’ve given them all the opportunity to lead in different ways.”

Among these players expected to lead New Canaan on the field are junior siblings Molly and Rachel Keshin. 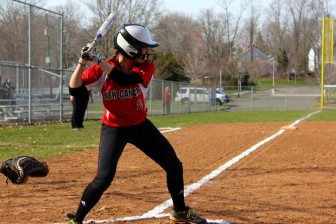 The University of Virginia-bound twins—both All-FCIAC Second Team selections last year— will be the cornerstones of an offense that shouldn’t have too much trouble scoring runs in 2016. Line-drive hitting Rachel batted .457 with 32 hits and 19 runs last year and provides the Rams with solid defense up the middle. A versatile fielder with tremendous instincts, speed and a strong arm, Keshin will see time both at shortstop and in center field for New Canaan this spring, depending on the matchup.

Twin sister Molly is another bona fide five-tool player and returns as one of the FCIAC’s most dangerous power hitters, while serving as the Rams’ primary catcher for the third consecutive season. Keshin hit a team-high .491 last year, adding 7 triples, 24 RBI and 20 runs—totals that are at or near the top of the list in New Canaan softball’s single-season record book.

“Molly and Rachel are both extremely athletic and can play multiple positions, which is huge,” Simoneau said. “They’ll excel no matter where we put them. They both can hit, and hit the ball hard, but they can also run the bases. And they’re extremely smart on the bases. Speed is one thing, but they’re also base running-intelligent.” 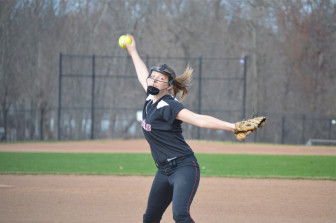 Another key to New Canaan’s success will be sophomore Gillian Kane. After splitting time in the circle last season with 2015 graduate Jamie Schlim, Kane returns this year as New Canaan’s sole pitcher. An All-FCIAC Honorable Mention as a freshman, Kane showed flashes of dominance, striking out 59 batters in just 45 innings pitched, including a school record-tying 13 K’s against Bridgeport Central in her second career start. Coming into this season with improved velocity, command and a bevy of new pitches in her repertoire, Simoneau feels a year of preparation and growth will serve Kane—and the Rams—well this spring.

“Gillian looks like a completely different pitcher,” Simoneau said. “She worked extremely hard in the off-season on her drive and using her legs. I’m pleased with the way she’s handling herself. It’s not easy being a sophomore and being thrown into the fire knowing that there’s no one that’s going to bail you out. During our scrimmage against Darien last week her ball was moving, and the key is that she showed some real maturity out there.”

Kane was also potent at the plate in her debut season, hitting .387 with 11 RBI and 23 runs scored. A lefty hitter who can bunt as well as hit the outfield gaps (4 doubles, 1 triple and 1 HR as a freshman in 2015), Kane will look to complement the Keshins in the heart of the New Canaan batting order. 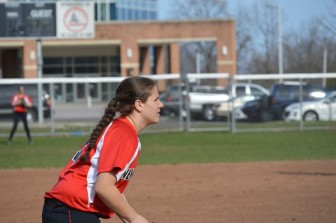 Some familiar names and faces returning to the Rams lineup will be junior infielder Molly Rochlin and junior outfielders Eliza Hjaney and Gabriella Sulpizi. Rochlin, a three-year starter, should slide into the No. 5 slot in the lineup and lock down the second base job after playing both second and third last season. Haney and Sulpizi will also be third-year starters for the Rams this season. All three have shown improvement at the plate and in the field this preseason. Junior Sophia Welch has been impressive at first base early this spring and appears to be a front-runner for the starting job. Versatile juniors Bella Marciano and Allary Landeck should see time in both the infield and outfield, while sophomore Clare Wagner will also be in the mix for varsity playing time, most likely at third base. 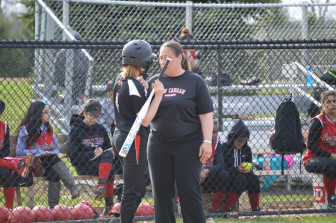 Perhaps the most intriguing player for New Canaan this season is freshman Kara Fahey. After years of success as a travel baseball player, Fahey finally made the switch to softball last fall and all signs indicate the transition was a seamless one. A multi-dimensional fielder who can play virtually every position—including catcher—Fahey is arguably the best raw athlete Simoneau has had in her six years at NCHS and should be an immediate-impact player for the Rams.

“Kara opens up a lot of doors where we can put people in different positions, because we can utilize her in more than one spot,” Simoneau said. “You can tell that she played this game before, regardless of whether it’s a big or a small ball. She moves differently and you can tell that she was born to play. There are certain things that she does that reminds me of (former Stamford High School star and All-State player) Krista Robustelli.”

Some additional new faces for the Rams include freshmen Morgan Hibbert, Bridget Cleary and Amanda Hill, each of whom have impressed Simoneau and assistant coaches Joel Geriak and Rich Bulan during preseason workouts. Buoyed by strong numbers during tryouts—including 13 freshman—the Rams will have a junior varsity team this season, providing Simoneau the opportunity to float players between JV and varsity and develop talent that should make New Canaan an FCIAC and State contender for years to come.

“The one thing that really stands out with this team is the camaraderie that has been established,” Simoneau said. “The freshmen bring a lot of positive energy—they want to be there just as much as the returning players and that is key.”