The Philip Johnson Glass House not only anchors the important Modern architecture of New Canaan, the Ponus Ridge site also has caused the Planning & Zoning Commission fewer problems than have other institutions in residential zones, the group’s chairman said Tuesday night. 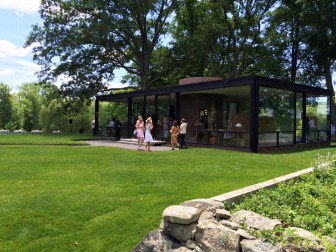 The National Trust for Historic Preservation site is an “amazing” property and the organization that operates it has been “very, very well behaved” since opening to the public in 2007, John Goodwin said during P&Z’s regular meeting, held at Town Hall.

“I’ve also been watching the management of the Glass House, and I know there’s a concern that this just is another director until the next director comes. But I would say that they finally have a business guy. My apologies to the architects, but sometimes it is good to have a business guy. And you walk that property and that property is struggling. It is very apparent. So I don’t disagree that our [the Planning & Zoning Commission’s] job is not to be finance people, not to solve their financial problems, but on the other hand I am very, very concerned about the Glass House and I think we have a responsibility. It is not well funded. We will have dialogue and debate and maybe it’s not everything they [Glass House officials] have asked for, but a lot of what they have asked for does seem to make sense.” 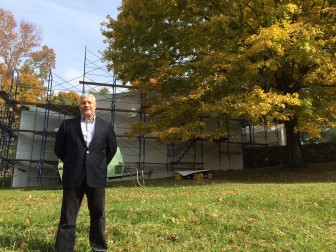 What they’re asking for is permission to expand operations in order to fund capital maintenance and improvements on the Glass House campus, which includes 14 structures on 49 acres. Led by Executive Director Greg Sages, the Glass House three months ago filed an application to amend its special operating permit in order to increase use of the site, and after neighbors expressed concerns and at P&Z’s urging, met with them several times and ultimately came to an impasse, officials said.

Under a scaled-down version of what originally had been proposed, the Glass House now is seeking to run one “night tour” per month in lieu of one currently allowed “twilight tour,” up to three “special programmatic tours” per year with approval from P&Z administrative staff and two “special corporate tours,” both with a maximum of 150 people and during the May through November tour season, and to increase the maximum number of attendees at the single annual fundraiser on the campus from 250 to 400. 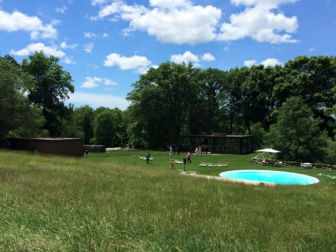 Commissioners on a divided P&Z gave voice to points in support of, and in opposition to, the proposals.

“Although some neighbors continue to desire no change at all to our special operating permit, we have attempted to address the underlying concerns such as noise and traffic” by limiting the number of events and attendees to ensure “low activity use” of the site, said Glass House Executive Director Greg Sages, who presented the application, together with attorney Edward O’Hanlan of Stamford-based Robinson and Cole LLP.

“Those who oppose our proposed modification do so based on speculation, not on any actual impact,” Sages said. 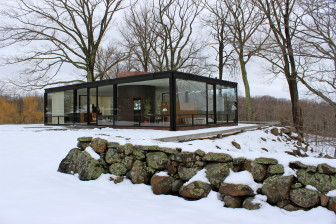 Ultimately, on Goodwin’s recommendation, P&Z decided to continue the matter to its April 26 meeting.

Commissioner Dick Ward more than once cited what he called a subsidiary of the National Trust for Historic Preservation that has raised about $1 billion since 2000, and urged The Glass House to work with its “parent” to find funding there—to which Sages replied that the corporation to which Ward referred is a separate entity from the Glass House and its funds are not made available to the local site.

Ward also warned against “institutional creep,” in which an organization such as the Glass House gets approval for what is initially a carefully considered application to operate, then starts coming back to increase its use.

Ward also quoted from a section in New Canaan’s Zoning Regulations (see page 162) that details special permit criteria, and said that neighbors of the Glass House had complained about noise at one particular event on the site.

O’Hanlan replied that the incident was isolated and addressed immediately, and that the type of event that prompted the complaint (a bar mitzvah) is no longer held at the Glass House. The attorney added, “You are a neighbor yourself, Mr. Ward”—a comment that fueled some discussion later—see below.

During public comments, proponents for the project described the Glass House as an architectural treasure and international tourist attraction that supports downtown New Canaan by funneling business into it and a community asset that has worked hard in recent years to become more involved with the town.

Neighbors opposed to the Glass House’s plans called for an outright denial, saying they worried about setting a precedent for nonprofit organizations that may seek to expand their own operations, affecting residential areas, as well as the site’s uncertain future needs and the attendant changes likely to come as well as what they described as broken promises from a line of past directors, none of whom has remained in the position long enough to provide real continuity or accountability.

Heather Goldberg of Ponus Ridge said the neighborhood has felt the impact of two times in the past that the Glass House has amended its operating permit and that “the changes that they are requesting are huge compared to the first original permit.”

The reason neighbors have not complained in the past is because “we have lives,” she said.

“I have a toddler. I’m not interested in coming here,” Goldberg said.

She added: “Why would I want to come here? That they contact us every two years is actually really tiresome and bothersome and difficult and affecting our lives.”

Goldberg said she has worked with the Glass House in the past and it appears that the organization has mistaken neighbors’ general support as a sign that it’s OK to renegotiate its operating permit every two years.

“The neighborhood does deserve a few guaranteed peaceful times,” she said. “We are not asking for much. Sunday morning until noon, could we have a time to be able to walk along Ponus, go to West School, play on the playground and walk back without seeing all the goings-on with the Glass House?”

Jack Trifero of Silvermine Road, formerly the owner of The Gramophone Shop and Gramophone Video on Main Street, said that while he understands the neighbors’ concerns, “there’s an overlying issue of the health and vibrancy of the town, that is important also.” The Glass House contributes to that health people its visitors dine and shop in New Canaan following a tour, Trifero said.

Regarding some of Goldberg’s points specifically, Trifero said that Silvermine also is a quiet community with people who like to walk, “and I have to say, this did sound a little precious to me, the neighbor’s complaint.”

Ward responded that he does not live in the area that falls within the notification requirements of the Glass House. According to Google Maps, Ward lives .2 miles from the Glass House, which the website lists as a 1-minute drive.

“I don’t know if anybody else here is a neighbor, but I would ask you to recuse yourself from the vote. I didn’t think you were non-prejudiced in your discussion.”

Ward responded that he disagreed and said: “I have every right to make a decision, and the fact that I am a citizen of the town of New Canaan and I do not represent the neighbors that have spoken or written—as a matter of fact, I haven’t even spoken to any of them, nor have they called me to try and influence me. And I thank them for it, because they recognize that that would be a conflict.”

Trifero responded that Ward “just seemed like a man who had made up his mind, before the discussion.”

Several commissioners voiced concerns that the Glass House appeared to be making a case that its proposed expansion of operations was necessary for its business to succeed, and that P&Z shouldn’t be put into a position where such financial considerations are heaped upon it.

Commissioner Laszlo Papp responded that while it’s true P&Z isn’t responsible for looking at the organization’s finances, the group does “have something at stake for the success of the Glass House.”

“Not financial success, but community success and that is what we have to look at,” Papp said. “Whether they raise prices or how much they charge or whatever—that’s not our concern. That doesn’t matter to us. What matters is that they succeed in their charge and contribute back to the town.”

During his presentation, O’Hanlan noted that the Glass House would be willing to undergo a type of trial period with its new operations plan and report back at year’s end—this year and possibly in future years—to P&Z on how things are going at the site, both in terms of expanded events and with neighbors. Town Planner Steve Kleppin said he would check with legal counsel to find out whether such an approval is allowed.

One thought on “‘That Property Is Struggling’: P&Z Chairman Voices Support for Expanded Operations at Philip Johnson Glass House”