It has been a little less than three months since the grand opening of New Canaan’s “GreenLink” trail and “greenway,” a walkable loop that includes, Irwin Park and the Nature Center. It traverses three New Canaan Land Trust properties, allowing citizens to take full advantage of their bounty.

Some say that you can’t take the GreenLink path without seeing at least one fellow resident taking a stroll, so we took it upon ourselves to peruse around and find out how people are feeling about it.

Jogging down the trail, New Canaan resident Katherine Mettler said the quality path for her knees helped with running. 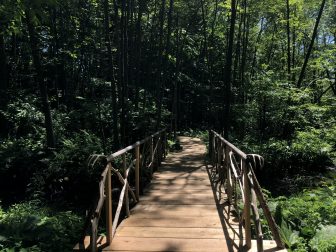 One of the bridges that make up the GreenLink trail pathway. Credit: Eva Pace

“At some trails, like Waveny, running on the pavement can be really hard on your knees,” she said. “I know this trail is still new, but the fact that it is lined with packed wood chips really makes a difference for regular runners like myself.”

Mettler also appreciated the trail from a safety perspective, seeing it as an opportunity for residents to avoid jogging on local roads.

“Joggers on the side of the road are a hassle and a safety concern,” she said. “The more trails the merrier, in my opinion, because hopefully, it will get people off the roads and into parks for exercise.”

Since its opening, the trail seems to have grown slightly more worn-in. New, unstained wood chips that stake out a footpath from Weed Street into the Nature Center’s existing trails are finally meshing into their surroundings. Being new, there’s also a notable lack of litter and clearly defined paths for walking.

“It’s really cool that our town is listening to our opinions in terms of what is done with their property,” Mettler said. “I can’t wait to see more and more people use this new trail and make it well-known.” 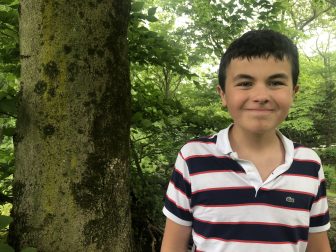 Nature Center Executive Director Bill Flynn thanked the New Canaan Land Trust for completing the trail and said he has noticed an increase in traffic through the Nature Center as a result.

“I’ve talked with people inside of the Visitors Center who live in town and had never visited us before but were here because of the trail,” he said. “We see cross country teams running through, it’s fantastic.”

“I really like it so far, I’m surprised more of my friends haven’t been here,” he said.

“To be honest, I haven’t seen that many people walking dogs or anything,” he said. “But I just saw a squirrel run right past my toes and blast up a tree. It went crazy fast.”

Smith said the school hasn’t yet incorporated the trail into class activities, but he can see them using it for science field trips.