New Canaan law enforcement officials are calling on town residents to participate in a new fundraiser for a cause that police here have supported in other ways for more than 30 years—Special Olympics of Connecticut. 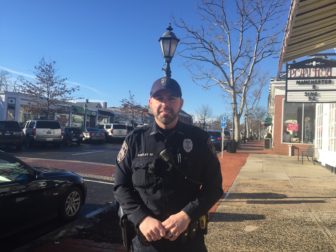 According to New Canaan Police Officer Ron Bentley, plans are underway to hold an inaugural 5K ‘Run with the Law’ at Waveny in the spring. The project is in its “infancy stages,” he said.

“Athletes depend on sponsorships to compete [in the Special Olympics],” Bentley told NewCanaanite.com. “Last year, the event was held in Los Angeles. For athletes in this area, fundraising covers training, flying across the country, food and clothing.”

With town approvals for the event, participants would make a donation and receive a T-shirt, and 100 percent of funds raised would benefit the Hamden-based nonprofit organization, according to Bentley.

The Special Olympics of Connecticut seeks to provide year-round sports training and athletic competition in a variety of Olympic-type sports for children and adults with intellectual disabilities.

Bentley—a 1994 New Canaan High School graduate who has worked as an assistant coach for the varsity baseball team and patrols downtown New Canaan as the department’s ‘Community Impact Officer’— has worked with Police Sgt. Brian Mitchell and Officer Tom Patton planning this event.

“We want kids to be involved,” he said. “We have a nice relationship with the athletic department.”

And the police long have had a nice relationship with the Special Olympics.

For 30 years, New Canaan and Darien police officers have participated in a three-day statewide Special Olympics Law Enforcement ‘Torch Run.’ Created in 1981 by Wichita, Kan. Police Chief Richard LaMunyon, the Torch Run has become the largest public awareness and fundraising group for Special Olympics. This year’s June 7 to 9 Torch Run will cover more than 500 miles and pass through more than 100 cities and towns.

The new5K ‘Run with the Law’ was inspired by the police department’s longstanding involvement.

“We want to get it out there to the town of New Canaan to move forward,” Bentley said. “This is a fundraiser for the New Canaan town and police department to come together in support of the Special Olympics of Connecticut.”