First Selectman Kevin Moynihan on Thursday questioned whether a videoconferencing service purchased by the town to bolster communications during the COVID-19 public health emergency is being employed appropriately by one elected official behind its regular use.

The town in March began reserving Zoom accounts with participant limits ranging from 100 to 500, and they’re used not only to run and broadcast public meetings but also for a daily afternoon video call moderated by Town Council Chair John Engel, Moynihan said during a press briefing attended by NewCanaanite.com and Hearst Connecticut.

Engel, a Realtor, on Tuesday used the town account to host a real estate-focused panel during the regular 4 p.m. time slot—an event teased and promoted in email blasts through his Halstead account.

“We aren’t clear on how he is using it,” Moynihan said in reference to the town Zoom account when asked about it during the briefing, itself held via videoconference.

The daily call started out “as a community service,” Moynihan said.

“And if it’s taken a commercial interest then that’s a different kettle of fish, and perhaps John needs to be making that clear to people,” he said.

Referring to Tuesday’s panel discussion, Moynihan said, “I noticed that John’s message [Tuesday] about the 4 o’clock call came from Halstead, not from his town of New Canaan account … I watched the 4 o’clock call but it seemed to be a different kind of call from the prior ones.”

Referring to the collection of email addresses for email blasts, Moynihan noted that Zoom users have increased during COVID-related restrictions from 20 million to 300 million users, “and email addresses are a valuable thing these days.”

“So the concern may be more, is it being used appropriately? And I have no knowledge of how it’s being used. Other than, I was kind of surprised [Tuesday] to see the email coming from John from Halstead rather than from John Engel the Town Council chairman. That signified some difference that I don’t quite understand.”

Asked about the matter, Engel reviewed how the daily call originated and said that at some point town resident Tucker Murphy recommended either changing the nature of the call “because it’s getting a little tedious” to discuss COVID-specific news five days a week, or to “run a panel around an industry or business.” Engel said that a local man named Bob Doran also advised on the panel model, and that this week’s real estate panel was not commercial and did not involve Halstead. 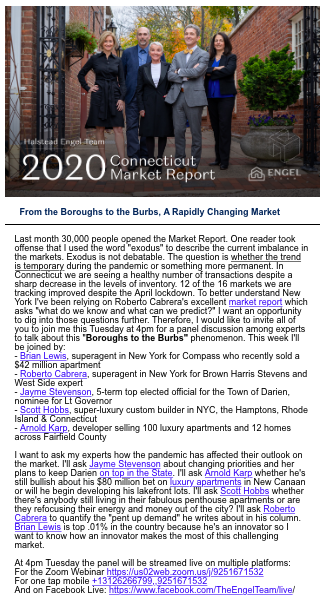 “It’s true, I added the announcement for it using my [Halstead] email because I do not have an email that gets me outside the 200 people in New Canaan, I do not have a list that connects to my town email account, so I used my Halstead account to promote it outside of New Canaan, but it was always my intention to make it not commercial,” he said.

“I am very discouraged that I am now hearing people question my motives for hosting the 4 o’clock call or my motives for convening a panel and going through the efforts of finding five experts from five different companies, none of which were my own, to talk on a subject,” he said. “I thought this would be the first of many different subjects we could tackle the would be interesting to the community and I am really discouraged by criticisms, so much so that I am thinking I should just stop the 4 o’clock call because I don’t want to hear the criticism. And nobody has criticized me to my face.”

Engel added, “You know what is going to happen? I’m going to put—I’m just going to say ‘[expletive] it.’ Print that. ‘Engel says [expletive] it. He’s tired of being criticized for pulling together the 4 o’clock call and panel that talks about real estate.’ This makes me mad, that my integrity is being questioned.”

Asked about the Code of Ethics specifically, Engel said that if there’s no financial interest on the part of a town official, there’s no conflict of interest.

“I don’t have a conflict,” he said, adding that this news article amounted to “a witch hunt, by bringing up the subject and asking Kevin [Moynihan] questions.”

Under New Canaan’s Code of Ethics, “No official or employee shall participate in any Town or Board matter in which he or she has a financial interest or a personal interest,” where “official” refers to both elected and appointed officials.

“A violation of this conflict of interest rule shall occur when … the official or employee had a financial interest or a personal interest in a matter,” it says.

He distanced himself from it, saying, “They [Town Councilmen] are independently elected officials. I don’t supervise the elected bodies. I supervise the town employees and town department heads.”

Moynihan added, “You are talking about an independently elected official that does his things the way he wants to do them.”

Asked whether municipal leaders had discussed Engel’s use of the town’s Zoom account, Moynihan said Selectman Nick Williams brought it to his attention and to contact him. Williams declined to comment when reached by NewCanaanite.com.

The call itself “has served a purpose,” Moynihan said.

“Maybe it is waning,” he said. “They are not always productive. Tucker has expressed the idea that maybe it should go to Monday-Wednesday-Friday. It is not my call. I attend because I think people expect me to give them updates on information I have and that is one way to keep people informed. It is a bit of an inconvenience to be obligated to be on the call every day from 4 to 5 o’clock, but it is what it is. I think maybe it’s outliving its usefulness.”

The Town Council approved the Code of Ethics by unanimous vote in October 2017. (Engel was among those who voted.)

According to New Canaan Information Technology Director Chris Kaiser, New Canaan pays $2,430 annually for five Zoom accounts. Moynihan said that Engel also had given use of the town’s Zoom account to Hearst.