Jennifer Dulos went missing one year ago, on the Friday headed into Memorial Day weekend—May 24, 2019—and has not been found. In January, weeks after officials charged estranged husband Fotis Dulos with murder, he tried to kill himself by carbon monoxide poisoning and died. On Thursday, Connecticut State Police in a press release corrected news reported by the Hartford Courant among other legacy outlets that detectives had been searching Fotis Dulos’s Avon home in connection with the ongoing criminal investigation.

The Town Council during its regular meeting Wednesday approved an organization’s plan to replant the forecourt of Waveny House. The Waveny Park Conservancy’s plan includes removal of cherry trees dedicated to the memory of former First Selectman Charles Kelley—a prospect that drew concerns from Kelley’s own daughter, a New Canaan resident, and other survivors. Conservancy board Chair Caroline Garrity said she now has spoken with Kelley’s daughter. “We are going to collaborate with her, over several options,” Garrity said. She added, “I think we were very pleased that we were going to get together with her and the landscape designer and decide how to move forward with the trees.” Yet one survivor of Kelley, Sara Brennan Rilling, said the Town Council was “misinformed” by the Conservancy. “The family did not OK anything,” Rilling said. “I guess Caroline Garrity can’t listen to what’s being told to her.” 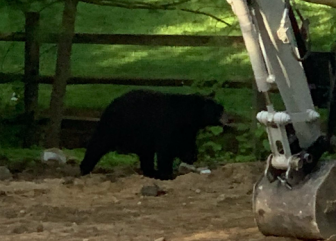 Days after the first black bear sighting of the spring was reported in New Canaan, additional sightings are coming in, according to Officer Allyson Halm, head of the New Canaan Police Department’s Animal Control unit. Sightings were reported at 5:50 p.m. and 6:45 p.m. Wednesday on Benedict Hill and Mill Roads, respectively, and then again at 7:20 a.m. and 9:35 a.m. Thursday on Parade Hill Road and the New Canaan Nature Center, respectively. A Pequot Lane sighting at 9:32 a.m. Thursday likely was a different bear altogether, Halm said.

The New Canaan VFW needs help in raising the nearly $10,000 it costs to place the wreaths every year—and donations can be made via tax-deductible check to: Veterans of Foreign Wars Post 653, PO Box 653, New Canaan CT 06840. 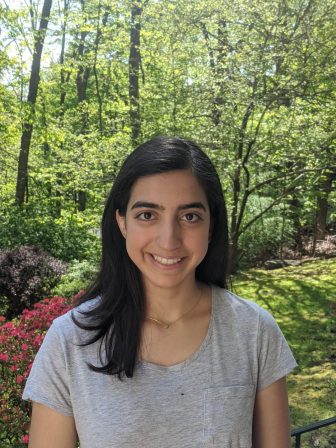 The Board of Selectmen on Tuesday voted 3-0 to appoint Susan Sweitzer to the Tourism & Economic Development Advisory Committee.

Congratulations to New Canaan Squash’s Tara Chugh, a senior at New Canaan High School, on earning All-American recognition by U.S. Squash. It’s awarded to players who are selected by their league for participation on a high school scholastic team at the highest level. “Tara was selected by the FairWest Public School Squash Association as the top female player from the 2019-2020 season,” we hear from Lisa Platt. “Tara played #1 for New Canaan High School throughout the 2019-2020 season and had an incredible 16-0 record in the FairWest League. In addition to her participation on the NCHS team, Tara played in many US Squash tournaments around the country and was ranked 25th in the GU17 bracket and has won 199 singles matches in her career. Tara is an incredible competitor and New Canaan Squash was lucky to have her as a role model both on and off the court.”

First Selectman Kevin Moynihan said during the selectmen meeting that the town likely will not reopen Town Hall for restricted public access until some time in mid-June.

New Canaan Police issued marijuana-related infractions in three separate incidents this week—at 2:31 a.m. Wednesday to a 24-year-old New Canaan man stopped on Cherry Street for driving with an expired registration; at 2:10 a.m. Wednesday to an 18-year-old Bridgeport man, stopped after failing to signal while turning from Lakeview Avenue to Millport Avenue; and at 7:32 p.m. last Saturday to a 25-year-old Stamford man stopped on Old Stamford Road for driving with an expired registration.

Responding to a question from Selectman Nick Williams during Tuesday’s Board meeting, Public Works Director Tiger Mann said that household waste brought to the Transfer Station has “definitely increased over the past few months.”

NewCanaanite.com recently published the 3,000th user-submitted event to the Community Calendar. Local events submitted through this form are promoted through our daily newsletter. 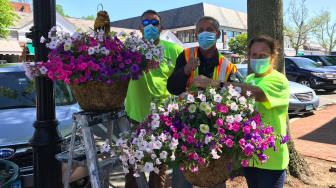 The New Canaan Department of Public Works on Thursday put up 220 hanging baskets created by the New Canaan Beautification League—an annual tradition that helps the downtown pop. Of the baskets, 200 are for the sun and 20 for the shade.

Finally, congratulations to the Hannah Benedict Carter Chapter of the Daughters of the American Revolution on winning two Connecticut DAR awards for an initiative last spring. Meredith Bach led the effort to hang U.S. flags from more than 60 lampposts downtown, working with Public Works Director Tiger Mann and Mose Saccary of the Highway Department.