The forecourt of Waveny House, including two cherry trees in the foreground that were dedicated to former First Selectman Charles Kelley. Credit: Michael Dinan

Trees planted outside Waveny House in memory of a former first selectman and a New Canaan youth who died in an accident would be removed under a plan brought forward by an organization that takes on landscaping projects within the park.

Recreation Director Steve Benko noted last week that two cherry trees that would be removed under the Waveny Park Conservancy’s plan had been planted in memory of Charles Kelley, first selectman of New Canaan when the town acquired Waveny. 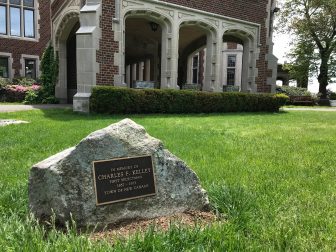 “And there’s a place there with a plaque with [Kelley’s] name on it,” Benko told Conservancy board President Caroline Garrity and board member Jane Gamber during the May 19 Parks & Recreation Commission meeting, held via videoconference.

“His daughter and her family still live in New Canaan, so I don’t know if you would speak to her about removing those trees. But they were planted in his memory. And there’s another dogwood tree—if you are standing in front of house looking left toward the trees there, there’s another dogwood tree, by itself. Those are two memorial trees that were planted in memory of a couple of kids who died in an accident. One tree died and that family has moved out of town. The other tree, his family still lives in New Canaan. So maybe check with those people.”

Benko’s comments came as the Conservancy sought approval from the Commission to pursue a new planting plan for the forecourt of Waveny House and adjacent grounds. Its first phase calls for removal of several separate trees and installation of a line of others, among other work, including irrigation and hardscaping. Gamber said she hoped the project could commence next month.

The consultant on the project, Wilton-based Jennifer Anderson of Jennifer Anderson Design & Development, said at the time that she didn’t know about the memorial trees’ significance and that they could be pruned back.

Anderson later added, “Steve, we will coordinate on all that.”

The Commission voted unanimously to support the estimated $125,000 multi-phased project.

Yet a note calling for “removal of cherry trees and birch” remained in the plans during Gamber’s presentation Tuesday to the Board of Selectmen. At the Board’s meeting, First Selectman Kevin Moynihan, summarizing what had happened at Parks & Rec, said, “Steve Benko noted there’s a couple of trees that were planted in the front yard that were dedicated to someone’s memory?”

Gamber said that Anderson “was absolutely taking that under advisement.”

She added that the memorial trees should remain in the design “in one way or another.”

Moynihan said he didn’t know “how mature these trees are.”

“When you are looking to redesign something that is in keeping with the character and history of the house, we may have to re-evaluate and perhaps we can move trees or plant a replacement tree if it doesn’t fit with the design,” Moynihan said.

Gamber responded, “We’ll bring that back to the designer.”

It wasn’t clear whether the exchange amounted to a go-ahead to take the memorial trees down, whether survivors of those to whom they’d been dedicated were contacted or what is the town’s policy on preservation of such trees, if any.

The selectmen voted 3-0 in favor of the project, as presented. The Town Council also must vote in favor of the Conservancy’s plan. The item is not on the legislative body’s agenda for Wednesday night’s meeting, though it could be added.

In recent years, New Canaan has honored deceased community members with tree plantings on Arbor Day (including at Waveny and Mead Park), and planted a sugar maple outside Town Hall in memory of a longtime public works employee who died in an accident.

Gamber opened her presentations by noting that the Conservancy has invested more than $1 million in projects at Waveny, notably in overhauling the pond at the foot of the sledding hill, and in the “cornfields” open area behind it. The selectmen thanked the Conservancy.

Selectman Nick Williams asked, “Historically, how does this work into the history of Waveny House? And I assume all of this is based on former plans, or is this a whole new de novo [project]?”

The Conservancy had asked Anderson “to do as much as she could to marry some of the original Olmsted design with the need to maintain a public park,” Gamber said. She referred to the famed Olmsted Brothers firm that laid out the grounds at Waveny more than one century ago.

“And the Conservancy will have the same commitment that we have with the parterre garden,” she said. “The Conservancy will do the maintenance for three years, to get all the structure in place, and then after that the town will take it over. And the key thing, we have to make sure that this is able to be maintained beautifully without undue effort by the town.”

She referred to a formal garden east of the balcony behind Waveny House that was redone two years ago amid some controversy.