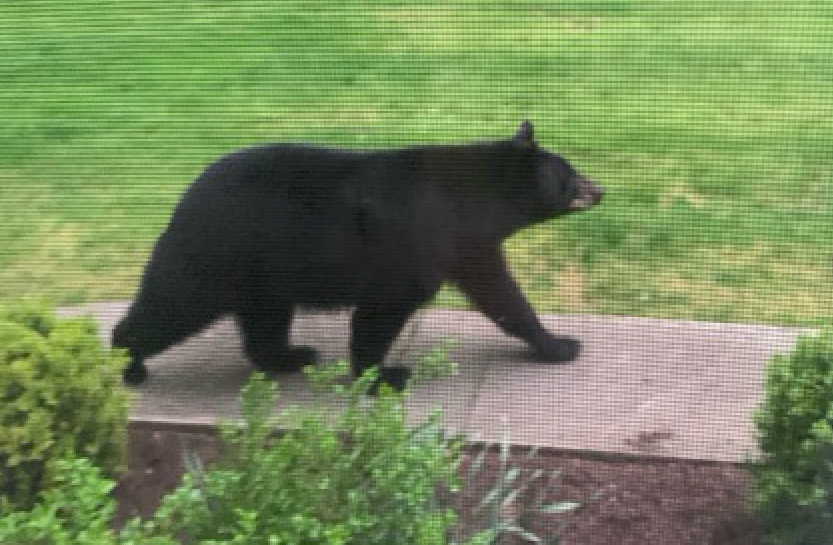 Black bear seen on a South Bald Hill Road property on May 17, 2020. Photo courtesy of Victoria Cohn. (Note: This is George the bear, as per Leo Mikkola-Patel, 12.)

[Editor’s Note: As indicated in our captions on the bear photos, we heard from a 12-year-old New Canaan resident who asked us to name the animal ‘George.’ In an email sent Monday, Leo Mikkola-Patel wrote, in part, “I am a twelve year old writing from quarantine and I think that in these crazy times people would appreciate some humor in their lives.” Asked how he chose the name ‘George,’ Leo said it’s his friend’s name.]

Animal Control officials are urging residents to be aware of wildlife following the sighting Sunday morning of a black bear in New Canaan. 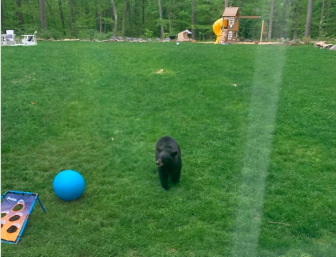 George the black bear seen on a South Bald Hill Road property on May 17, 2020. Photo courtesy of Victoria Cohn.

The sighting on Woodridge Circle, the first of the year as spring gets underway in earnest, coincides with a rise in coyote, fox and snapping turtle activity, according to Officer Allyson Halm, head of the New Canaan Police Department Animal Control section.

New Canaan has seen black bear activity each spring for the past several years. The bear likely was a young male looking for new territory, Halm said. 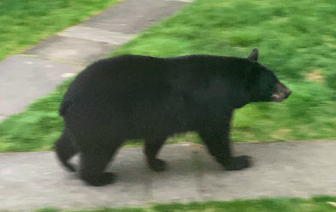 One more of George. Photo courtesy of Victoria Cohn.

“We know bears love birdseed, so we encourage people, especially this time of year, to bring the birdseed in or have a pulley system to pull it up high,” Halm told NewCanaanite.com. “And of course, garbage. I am convinced that on garbage day, the bear will follow the scent of a garbage truck and they can follow a scene for miles and miles. So garbage should be secure and in a garage, if possible.”

A family of foxes also has been reported living at the edge of downtown New Canaan, Halm said—a female with seven kits was sighted on Maple Street, and again at Colonial Court. A family of seven coyotes—mother, father and five pups—also has set up a den on Carter Street, Halm said, and coyotes have been sighted in the Bristow Bird Sanctuary. 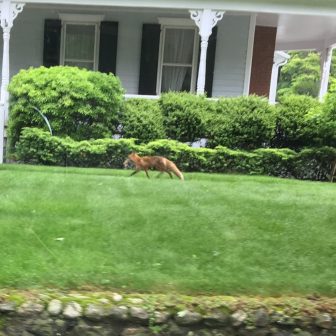 Photo of a fox seen walking from Colonial Court, across South Avenue and down Church Street. Photo courtesy of Henry Hawley

“They are super active right now, and when you have that many mouths to feed, they are going to hunt day and night,” she said.

Additionally, despite the trapping and killing of five coyotes in the neighborhood last fall, two coyotes were spotted on Hillcrest Road, Halm said.

“So much for trying to eliminate them—the void has been filled,” she said.

Dogs, especially smaller breeds, should not be left outside unattended, Halm said.

Halm also encouraged motorists to be aware of snapping turtles in the roadway. Those who want to help them get across the street should make sure they go in direction they’re already headed (or they will simply turn around and re-cross the road), Halm said.

Finally, residents should expect to see fawns on their properties and around town. If someone sees a fawn on their own lawn, they should leave them alone for 24 hours as a mother likely is nearby, and in no situation should a person touch the fawn, Halm said.