The Police Commission voted unanimously Friday in favor of a reconfigured parking and sidewalk plan for downtown New Canaan that could remain in place through mid-October. 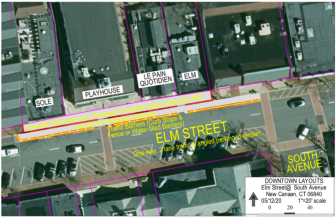 Part of the new downtown street and sidewalk configuration approved May 15, 2020 by the New Canaan Police Commission. DPW rendering

Designed by town officials and citizen volunteers, the plan is designed to create additional outdoor dining areas for local restaurants. To take effect some time after May 20, it calls for “bump-outs” onto parts of the sidewalks along Elm, Forest and Main Streets and creation of new pedestrian walkways around them, in what had been on-street parallel parking spaces, to be marked and protected by objects such as water-filled barriers and planters.

Specifically, the plan calls for bump-outs in two areas along the north side of Elm Street, one in front of Rosie and another from Elm restaurant through Solé; a bump-out in front of Spiga restaurant on Main Street; and one more on the west side of Forest Street from Cava through the New Canaan Diner, with one-way motor vehicle traffic to flow along the eastern side of the street, currently used for parallel parking. 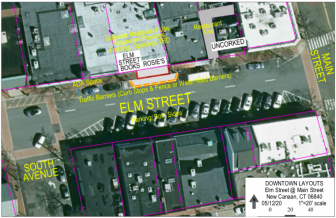 Part of the new downtown street and sidewalk configuration approved May 15, 2020 by the New Canaan Police Commission. DPW rendering

The angled parking along the south side of Elm Street will not change, Public Works Director Tiger Mann told the Commission during a special meeting, held Friday via videoconference. Nor will the parallel parking on both sides of Forest Street beyond the diner change, Mann said.

“Therefore, the residents that live in the new condo complex can just access their homes and residences as they have normally done,” he said.

The plan calls also for creation of an accessible space on Cherry Street near Cherrystreet East restaurant, which is to convert its parking lot into outdoor dining.

“I think the plan is very good,” McLaughlin said. “A very modest plan. It is a plan that can be expanded if things go well, in terms of virus and the state mandates and so forth. It’s a plan that we can always go back and expand it.

Business owners and commissioners attending the virtual meeting asked whether the barricades planned for Elm Street near the Playhouse would block pedestrians seeking to use the crosswalk (no), whether those with existing outdoor patios would get additional bump-outs as well (no), whether those seeking to put out new tents for their outdoor areas need a permit (yes) and whether Hashi Sushi on Forest Street would be able to get outdoor dining (they have a patio in back and may be able to use part of the parking lot there, too). 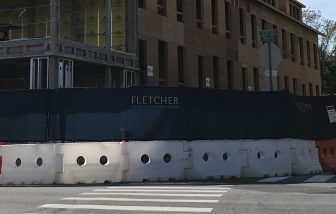 The water-filled barriers to be used look like the ones at Forest Street and Locust Avenue, officials say. Credit: Michael Dinan

Elm Street Books owner Susan Rein asked about the water-filled plastic barriers that are to be used to cordon off the new pedestrian walkways. According to Mann, they will be new and white, with no markings or stenciling on them, and are an improvement aesthetically over concrete barriers.

Rein said, “So these are going to be all over New Canaan, these orange things but white? You can’t put nice picket fences or something? I mean, these are not aesthetically so pleasing, if you ask me. To have them all over town.”

Mann responded that “as far as crash-worthiness and pedestrian safety and protection, they are about as pretty as you are going to get.”

The town also will add planters to “soften” the barricades, but using the planters alone would not be safe and also would be cost-prohibitive, he said.

Foley thanked the town police, health, public works, P&Z and fire officials who worked on the plan, as well as citizen volunteers such as Tucker Murphy, saying, “A lot of time and effort went into this.”

“And we have got to realize this is not a permanent fix here, this is temporary,” Foley continued. “We have to get through this mess we are in, and this is a good 1st attempt to do that. It’s adjustable and we’ll be flexible.”

Restaurants are to allow for six feet of distance between tables in the outdoor dining areas, officials said.

Foley called for the plan to be “renewable” by the Commission every 30 days and, asked about changes that may need to be made sooner, said the appointed body would call special meetings as needed.

In all, the downtown stands to lose about 25 parking spaces across all areas. Murphy noted that town parking lots are free. First Selectman Kevin Moynihan had signaled earlier in May that the proposed new sidewalk and parking configuration was coming.