New Canaanites can expect work to commence soon on the first project conceived and funded by a nonprofit organization that’s taking on the restoration and beautification of Waveny’s most cherished and widely enjoyed grounds. 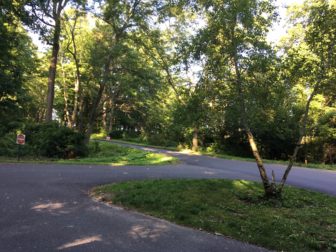 The Waveny Park Conservancy is planning to install a trail that will run up the hill on the left. Credit: Michael Dinan

The Waveny Park Conservancy (see brochure embedded below) is providing $27,515 for a contract with a Bedford Hills, N.Y.-based company to create a new 8-foot-wide trail that’s designed to help pedestrians stay off of the main road through the park at an especially dangerous, twisting section with limited sight lines for motorists.

The Board of Selectmen at its regular meeting Tuesday voted 3-0 in favor of the contract with Cambareri Masonry.

Broached by the Park & Recreation Commission last fall and endorsed enthusiastically by that group when the conservancy brought forward a formal proposal in March, plans call for a trail that will start at the base of the hill that climbs up past the Orchard softball field, on the southern side of the road, through a disused wooded section that leads to the parking lots in front of Waveny House.

The trail’s designer and a board member of the donor-supported conservancy, New Canaan-based landscape architect Keith Simpson, said during the selectmen’s meeting that his own firm has used Cambareri for decades.

First Selectman Rob Mallozzi said that one point of emphasis when the conservancy formed last year was to “use the right vendors.”

Noting that the higher bidder for the project who was not selected also does very fine work, Mallozzi said: “There was definitely an emphasis that you folks wanted to be comfortable with the quality of work done on the projects you are raising these funds for.” 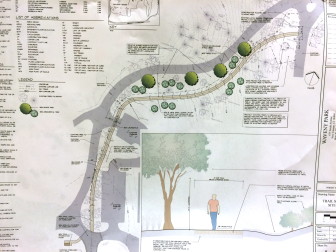 A look at part of Keith Simpson’s plan for the new trail, on behalf of the Waveny Park Conservancy.

“It’s nice to know you have a good relationship,” Mallozzi said at the meeting, held at Town Hall.

Work will start “as soon as possible,” said Tiger Mann, assistant director of the New Canaan Department of Public Works, and will not disrupt traffic flow on the main road through Waveny.

The larger-picture plan for the trail includes crossing the entrance to the first parking lot (on the left as motorists climb the hill past the Orchard Field), then running through the tree-lined island there, closing off what the conservancy has deemed an unnecessary second entrance so it’s also pedestrian-friendly, and then crossing the parking lot entrance closest to Waveny House before connecting to parkland again.

Simpson noted that the bid itself came through lower than anticipated, so “we look forward to coming back” with more projects—a prospect welcomed by the selectmen.

The trail proposal, part of a larger effort to improve the entryway to Waveny from South Avenue to the main house, is one of five major programs coming out of the conservancy. They’re all located in a large swath of Waveny bordered by the road through the park, Lapham Road, the Merritt Parkway and South Avenue. Others include improving the pond at the foot of the sledding hill, a forest management study that will serve as a foundation for future woodlands, trails and open space (both presented at Wednesday’s meeting), restoring the cornfields and restoring the formal gardens and areas near Waveny House.

It’s a guiding principle of the conservancy’s work to restore the park’s grounds to the original vision of the Olmsted Brothers, the successor landscaping firm to Frederick Law Olmsted that Texaco Oil Company co-founder Lewis Henry Lapham (actor Christopher Lloyd’s grandfather) hired after acquiring the New Canaan property in 1904.