Members of the private nonprofit group that formed to recommend, fund and oversee improvements to a portion of the grounds at Waveny on Wednesday night unveiled a dramatic plan to create a more visible, functional and attractive pond at the foot of the sledding hill. 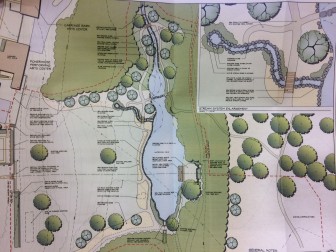 A closer look at the plan for Waveny Pond. Courtesy of Keith Simpson Associates

The Waveny Park Conservancy is calling for new trails, stream system, fishing dock, bridges and wildlife lookout area as well as a full dredge, re-routing of a conspicuous utility line overhead, installation of underwater bubblers to prevent hypoxia, improved spillway and extensive landscaping around the pond, such as the removal of several trees in order to restore the area to the Lapham family’s original vision and create better sightlines toward the main house, according to Keith Simpson, New Canaan-based landscaped architect and member of the group. 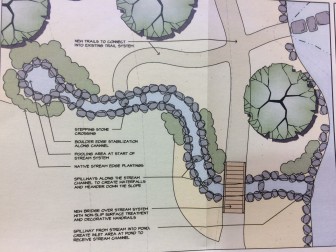 Details of the inset on the Waveny Pond plan/rendering. Courtesy of Keith Simpson Associates

“A project such as this is a major construction project, no question about it,” Simpson told members of the Park & Recreation Commission during their regular meeting, held in the Douglass Room at Lapham Community Center.

The plan for the pond is one of five major programs coming out of the Conservancy. Others include improving the entryway to Waveny from South Avenue to the main house, a forest management study that will serve as a foundation for future woodlands, trails and open space (both presented at Wednesday’s meeting), restoring the cornfields and restoring the formal gardens and areas near Waveny House. 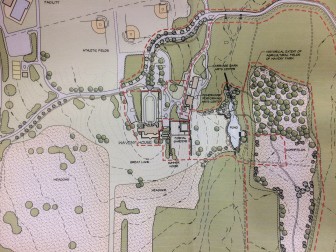 A “first look” at the Waveny Park Conservancy’s plans for a large swath of the grounds of New Canaan’s public park. Courtesy of Keith Simpson Associates

The group’s chairman, Bob Seelert, said all that work will cost an estimated $2.4 million and could be completed within three years. Under an operating agreement with the town, the Conservancy must demonstrate that it has funds for the capital projects, and reserves for all future maintenance, prior to starting physical work at Waveny. With support from town bodies, Seelert said, the Conservancy would begin fundraising in earnest in the new year.

The commission voted 6-0 to support the group’s plan for the pond, entranceway and its purchase of the forest management study (presented by New Canaan’s Skip Hobbs, also a member of the Conservancy) and recommend the Board of Selectmen do the same.

Commissioners asked about a plan to cart dredged material from the pond to the cornfields, a sticky point in the recent past (a detailed plan for re-using the material will be presented in advance of the dredge), whether fundraising estimates include dredging (yes), whether the process of listing Waveny on the National Register of Historic Places prohibits any of the planned work (no) and whether heavily used trails would need to be shut down (not likely, since there’s a ready access road to the pond).

On the pond dredge—a project that’s been in the town’s capital budget out years but put off for reasons of other, more pressing needs—and all other plans for Waveny, Simpson underscored that the Conservancy in no way intends to be critical “of what the town has not been able to accomplish.”

“We know that we live in a world of priorities,” Simpson said.

Simpson reviewed his own extensive professional experience in watercourse creation and restoration, and during a slideshow presentation explained that Waveny Pond itself originally had been a “farm pond” that was used by cattle and for harvesting ice, and that as the Laphams took over Waveny in the early 1900s the sprawling property was transformed from a functioning farm into a private family estate.

With photographs of the house and grounds from three different eras—the early years of the Laphams’ ownership around 1912 and after, 1981 (when Simpson himself led a landscaping plan and project at Waveny) and current-day—Simpson reviewed ways that Waveny House and some of its features, gardens and grounds have changed over time, in many cases as the result of no deliberate or cohesive plan.

“It is very largely a historic restoration project,” Simpson said of the Conservancy’s work.

One thought on “‘This Is Really Exciting’: Conservancy Unveils Plan for Waveny Pond”