We’re very proud to announce that at 9:10 p.m. on Wednesday, Dec. 9, NewCanaanite.com notched its 1 millionth pageview of calendar year 2015, our first full year since launching. 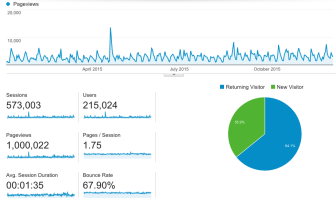 Google Analytics snapshot of NewCanaanite.com traffic from Jan. 1 to Dec. 9, 2015.

My brother Terry and I founded the New Canaanite on Jan. 31, 2014, to cover quality-of-life matters focused entirely on New Canaan, including traffic and parking, pets, parks, schools, land use, the downtown, local history and resident profiles.

It’s supported entirely by local businesses that advertise on the site, in our daily newsletter and in our “special sections” such as the current Downtown & Holiday Guide.

We share this milestone with those businesspeople as well as our devoted readers. 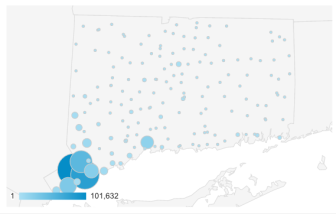 Traffic distribution on NewCanaanite.com in Connecticut from Jan. 1 to Dec. 9, 2015. Source: Google Analytics

Terry and I have been eyeing our traffic numbers and guesstimating just when we would eclipse 1 million pageviews. What pushed us perhaps more quickly toward passing that goal was when, one week ago, we covered the touching story of a local woman organizing the community to recognize and take care of a beloved crossing guard during a time of need. The article and its follow-up, which included a video, garnered more than 1,000 Facebook likes and 12,000 pageviews combined.

Though we cover all news in the town, including very difficult news, the story of Terry Darden is just the type of article we like to write: An up-close look at New Canaanites and the people who make the town special, in an originally reported, exclusive and local story.