Gates, a restaurant that since its opening in 1979 has become synonymous with downtown New Canaan, has been sold and will close Sunday, according to the staff at the Forest Street establishment. 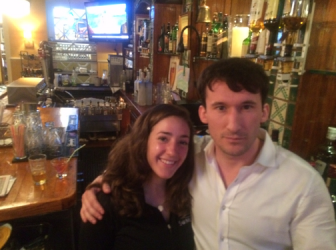 The restaurant’s owners—Billy Auer and Jeb and Ceal Swift—informed the staff Monday, said Ash Raci, a bartender at Gates for more than four years.

“It was kind of a shock for everybody,” Raci said.

The restaurant will be open for brunch, lunch and dinner Sunday, then will close while interior renovations are done for a new restaurant, he confirmed.

Swift and Auer had met when they worked together in the mid-70s at Boodles Bistro in Greenwich. They learned of available space at 10 Forest St. that previously housed the offices of famed architect Victor Christ-Janer, and was being used as a temporary location of the New Canaan Book Shop. 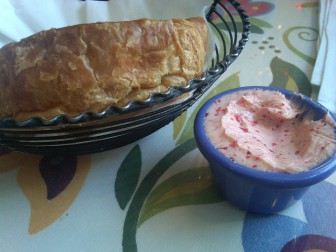 The iconic croissants with strawberry butter from a recent brunch at Gates. Credit: Terry Dinan

With its signature iron gates facing Forest Street and croissants with strawberry butter as part of Sunday brunch, Gates has been as much a part of the life of New Canaanites in the past four decades as any establishment in town. Serving as the unofficial “town restaurant,” Gates is one of the holdouts of a bygone era, and has hosted many celebrations for generations of locals—from first dates and high school reunions to birthday, graduation and wedding parties.

Raci said it was a privilege to work in Gates, with its “wonderful customers and people who have been here since day one.” 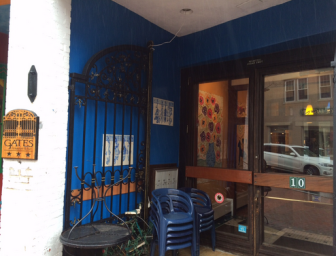 “I’m excited that I had a chance to be here and be with the owners,” he said. “I love the owners, they’re just great people. Unfortunately, times change and you have to move on.”

It isn’t clear what type of restaurant is in store for the space.

Together with Cherrystreet East, Gates has persevered through countless restaurant openings and closings in town, establishing a longevity matching legendary New Canaan eateries of the past such as Fat Tuesday’s, Elmcrest Luncheonette and Pierre’s-aka “Izzy’s Place.”

Told of the news, New Canaan Chamber of Commerce Executive Director Tucker Murphy encouraged locals to “remember the wonderful times we all have had at Gates over the years.”

“Thank you to Jeb and Billy for making that happen. Being a restaurant owner and operator is a ton of work and I hope that retirement along with lots of rest and relaxation is first on the ‘to-do’ list.”

Auer and the Swifts were not immediately available for comment. Rumors of Gates’ closing had swirled about for the past few weeks, and the restaurant’s owners initially had denied them.

NewCanaanite.com will update this article with new information as it becomes available.

—Terry Dinan contributed to this article

One thought on “Gates Restaurant to Close Sunday; New Canaan Institution Has Been Sold”