Saying the new owners of an oddly shaped parcel on Jelliff Mill Road knew what they were getting in acquiring the property, and objecting specifically to the size of a proposed new dwelling there, neighbors during a public hearing on Monday night voiced opposition to the plan. 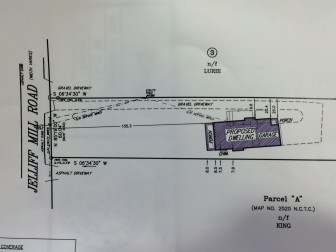 Specifically, in more than doubling the size of the 1.5-story, 1,200-square-foot cottage that sits now at 335 Jelliff Mill Road, a taller, slightly wider structure proposed for the long, narrow lot (60 feet wide and 744 feet long) would be exacerbating what already is a nonconforming structure, neighbors told members of the Zoning Board of Appeals at their regular monthly meeting.

The neighbor to the west, Richard Lurie, told the ZBA that “if you say ‘Yes’ to this request, when would you ever say ‘No’?”

He added: “I believe the objective of P&Z is to ensure that zoning laws are followed and that you bring properties more into conforming not letting them be more non-conforming which is what is happening right here. So basically my view is that they are putting something that is outrageous in the size of this property—it is only 60 feet wide and increasing its non-conformity and there seems to be no protection for anyone living around the property in the zoning laws. This is just shocking.” 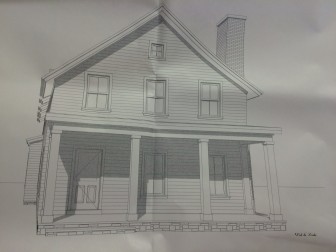 Plans call for a house with some 2,891 square feet of living space (without the garage) that rises more than 10 feet higher than the existing cottage. The new home takes “some cues off of the house to the east” such as a covered portico and flush dormers, according to New Canaan architect James Schettino. (The attorney on the application, for a variance to section 3.5.E.2 of the New Canaan Zoning Regulations—see page 58 here—was unable to attend the hearing, Schettino said.)

The ZBA ultimately encouraged its new owners—brothers James and Greg Demirjian, who own the property under a LLC—to spend one month working with neighbors to see whether middle ground can be reached.

Board members asked whether the building coverage listed excludes a planned porch and chimney (yes), how the proposed structure’s height compares at the ridge to what is there now (about 12 feet higher, from 17 to 29 feet), and how arborvitae would be planted along the property’s western edge with existing shrubs now in place (the driveway would shift east to provide a 5-foot buffer).

Other neighbors objected to the application for a variance, saying that the proposed new home is in appropriate in style (that a ranch would be better), that it would take many years for arborvitae planted on the western edge of the property to grow sufficiently large to serve as a screen, and intimated that the new owners are builders.

James Demirjian clarified that “my brother and I are not builders and we are in a completely unrelated field.”

“What we did do was discuss early on in the process was to come up with a very appropriate design and so we think that the architecture and the design that we have laid out here is very appropriate and we had hoped that neighbors would be happy about it,” he said.

The next ZBA meeting is scheduled for Monday, Jan. 4.

Here is where 335 Jelliff Mill Road is located: