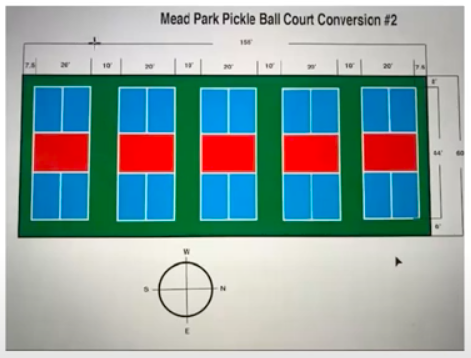 Town officials say they’re converting a standalone hard-surface public tennis court at Mead Park into a series of “pickleball” courts for use by New Canaan residents.

Located up behind the collonade on the western edge of Mead, a tennis practice wall area also will be converted into a a pickle ball court so there will be five in total, under a plan that’s expected to go before the Board of Selectmen later this month, according to Public Works Director Tiger Mann.

“The overall thought is to redo that hard court at the top, take away the trees that are along the railroad tracks, since they are damaging most of it, resurface or put an entire post-tension concrete surface below, surface the top of it, put in new fencing and then some additional trees in the back just as a buffer to soften the look along the railroad tracks,” Mann told members of the Parks & Recreation Commission at their regular meeting, held March 10 via videoconference.

The practice wall will remain with a pickleball court lined out on what will be the new post-tension concrete surface that will bring it up to the same grade/level as the other four, Mann said while showing schematics drawn up by West Haven-based Hinding Tennis LLC.

Asked when he’d like to start the project, Mann said, “Now.” Once the concrete for the surface is poured, it takes about three weeks to cure, according to Recreation Director Steve Benko.

It’s unclear how much the project will cost. Mann said, “We got approval from the Finance Department for the funding as far as transferring over from the clay courts all into the pickleball court account.” It does not appear that there’s a line item in the fiscal year 2021 capital budget that refers specifically to the clay courts at Mead Park.

The question of whether to reimagine use of some of Mead Park’s tennis courts arose two years ago after town officials say they saw waning interest in the sport. Ideas that Parks & Rec floated at the time included pickleball, volleyball, basketball or a flexible field. Yet interest in tennis, including the town’s clinics, has risen sharply amid the COVID-19 pandemic.

It’s unclear how much input from the public town officials sought on future use of the hard-surface court and practice wall area at Mead. Mann said that he, Benko and Parks Superintendent John Howe would meet Thursday with a contractor to review the project and finalize a plan. Parks & Rec Chair Rona Siegel said Commissioner Steve Haberstroh had been involved in the project, though it was unclear whether his involvement was as a member of a Parks & Rec committee or whether that committee held public meetings.

During last week’s meeting, Haberstroh thanked Mann for working on the project.

Commissioners asked whether the cost of the project was in line with what had been “earmarked” (yes) and whether the courts’ creation would disrupt people using the clay courts at Mead or dining at the Apple Cart food concession (some noise but not a disruption).

Commissioner Laura Costigan asked about plans for a registration system for the pickleball courts’ use, saying she assumed “this will be pretty popular when it’s ready to go.”

Benko said the town would use the same online registration system that it uses for tennis at New Canaan High School and paddle at Waveny, and that an attendant for the Mead Park clay courts can monitor use of the pickleball courts.