Following the discovery that at least one individual associated with a local taxi service had been living out of the New Canaan train station, complaints that cab drivers often nap on the benches inside and some rather disgusting vandalism in its bathroom that turned up over the holidays, town officials are seeking state approval to install additional video cameras both inside and outside the facility. 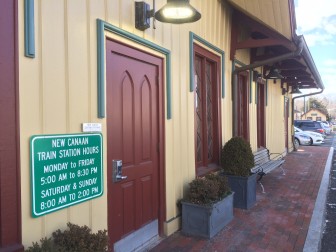 The approximately $10,000 camera installation (the MTA already keeps its own cameras on the platform side)—to be paid for out of a fund generated by the $5 parking fees immediately adjacent to the station itself—also would help save time investigating accidents such as when CT Transit buses strike the platform canopies, according to Bill Oestmann, superintendent of buildings with the New Canaan Department of Pubilc Works.

“Overall, it is a hard building to manage with so many people in and out, and we need to tighten it up—as we know, with everything going on in the world, security is not a bad thing, and for police to get real-time data from the cameras is good.”

Oestmann said that some time between Christmas and the New Year, a bathroom in the station was vandalized by feces strewn all about it. In other incidents, a friend of a cabbie had been found to be living at the station, and more recently, officials discovered personal belongings stuck into the electrical cabinets on the platform, Oestmann said.

Local officials do not have access to the MTA’s cameras on the platform side, and under a new security system—which will include updating locks on the doors—New Canaan police and Oestmann will be able to monitor the goings-on at the station far better, he said.

The Connecticut Department of Transportation owns the property at the station, and the MTA operates the railroad on it. Under a management agreement between the state and town, New Canaan cares for the station, and pays for maintenance and repairs out of the $5-per-day parking fees, which are kept in a dedicated fund. Though the town does not deal with the rail itself or overhead electrical gear, the municipality cares for the lights in the lot, shovels snow, cleans bathrooms and paints and otherwise cares for the physical station building.