New Canaanites are calling for harder numbers and timetables behind projected cost-savings in natural gas conversion—for example, how much it will cost to convert a home of X square feet that lays Y feet from a main line, and exactly when service will come to each property—prior to committing to Yankee Gas to the degree that the utility needs in order to put a shovel in the ground here.

Yankee Gas said during a panel discussion at New Canaan Library Monday evening that it wants to have natural gas service available in New Canaan starting this fall. That service would start by following a roughly 5-mile main up from Stamford along Ponus Ridge, running the length of Frogtown Road, jogging down Weed, running from the top of Elm to South Avenue and then out to the high school. At first, the line would serve many New Canaan businesses in the heart of our downtown, as well as a lot of big town buildings near the route (Town Hall, Police Department, South, Saxe and the high school) and possibly the YMCA.

Yet even those buildings no longer carry enough of the natural gas load to reasonably offset, in the eyes of state regulators, the cost of doing the infrastructure work here, according to Paul Zohorsky, vice president of gas operations at Northeast Utilities (which owns Berlin, CT-based Yankee Gas).

Before the state will allow the utility to start work on a 5-mile main, it needs to reach a tipping point in contractual commitments from New Canaan—the municipality, businesses and residents (60 percent of the load)—so as to avoid raising rates for other subscribers in Connecticut, Zohorsky told 100 residents gathered in the Adrian Lamb Room of the library for the panel discussion.

The message back from New Canaan: We need more information prior to putting our names on those contracts. 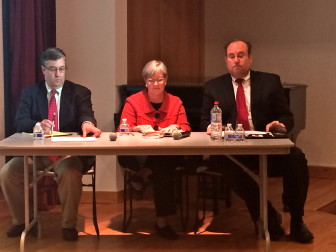 “These are educated folks here in our town and they make educated economic decisions and really, I don’t think we’ve gotten enough out of Yankee Gas to have anyone confidently make that decision,” said First Selectman Rob Mallozzi, a panelist at the event, drawing some applause from the room. “It’s a big challenge for you folks [Yankee Gas]. You are hearing it loudly and clearly. If there’s going to be any success, the dialogue with me is going to be important. But most important is going to be the dialogue with these folks to get them the concrete numbers.”

The event, presented by the library and League of Women Voters of New Canaan, ran for nearly two hours (mostly Q&A) and was moderated by New Canaan resident Mark Robbins, a board member of the Connecticut Green Building Council and property assessed clean energy consultant. The third panelist was Kerry O’Neil, director of residential programs at the Clean Energy Finance and Investment Authority. Other speakers at the podium included Howard Freeman, successor to Dan Welch as chair of the New Canaan Utilities Commission, where New Canaan resident Scott LaShelle also sits as a resident expert in natural gas-related matters, and Tucker Murphy, executive director of the New Canaan Chamber of Commerce. 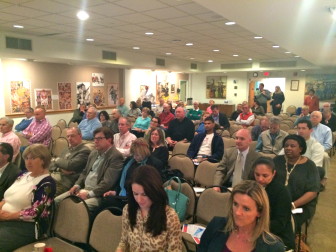 Questions raised by attendees addressed the origins of the 60 percent stumbling block (Connecticut Public Utilities Regulatory Authority), how long it would take to lay the 5 miles of pipe (two to 2.5 months), details on how condominium associations would work and whether homeowners could keep their oil tanks (yes).

Murphy said she wanted clarity as to how Yankee Gas intended to improve communication with the chamber and business owners. The utility had generated wide interest in natural gas conversion in New Canaan heading into last fall, and then when new state regulations came down, grew slow to respond, or non-responsive, to requests from town and business leaders for status updates or information, officials say.

Zohorsky responded that for residents and businesspeople who sign up on a website dedicated to gauge interest from New Canaan residents and businesses (this isn’t signing a contract, it’s saying you’re interested, here: http://newcanaan.iwantnaturalgas.com/), Yankee Gas will provide monthly email updates and additionally will meet weekly with Mallozzi and attend more forums as needed.

“We’ve been, I will say honestly, a little slow in using that [website] in responding to people,” Zohorsky said. “Why? Because we had to get our arms around these new regulations. The new regulations came out in November, by the time we figured them out to see the implications, it took us a while.”

Murphy also noted that while many business owners in New Canaan are intrigued by the prospect of natural gas, the decision-makers in each case—the owners of the buildings themselves—often live out-of-state and must get information directly from Yankee Gas. One owner of commercial property downtown, Terry Spring, suggested that technicians from the utility meet with landlords and tenants both.

“There are many property owners who are not in New Canaan—who live in Florida, Bahamas, wherever—they are not available to their tenants and the tenants ask questions, and without answers it’s going nowhere, I can tell you that,” Spring said.

Mallozzi said he and other town officials could help connect the utility with those property owners.

During her presentation, O’Neill discussed financing options for home conversion to natural gas, including through a ‘SmartE Loan.’

Mallozzi closed the forum by thanking the library and League of Women Voters for its work in organizing the event.

“You have delivered, 100 percent,” Mallozzi said. “This turnout was wonderful. The questions were really good. This is exactly why we appreciate the League of Women Voters.  You can do something that I can’t do as a politician, that my public works folks can’t do. So thank you, because we needed this conversation desperately and we got the ball rolling tonight.”

One thought on “Forum with Yankee Gas in New Canaan: ‘Get Them the Concrete Numbers’”