When you have a husband, two kids and a mother on the same block, you may assume there is no significant void to fill in your personal life. Me too. I never realized how the unconditional love of a dog could wiggle its way into the deep, dark crevices of my jaded heart and make things whole.

The rumors are true: Years ago, I convinced my truly wonderful husband to purchase a home on the same street as my mother. If you’re conjuring up images of Everyone Loves Raymond, you’re on the right track. While we do not live directly next door to my mom, we could easily send smoke signals to each other.

How to go about such spousal chicanery? First, you insist that your mother will imminently sell your childhood home to your fun brother and his young family. Then, you convince your hubby that, in the meantime, it will be beneficial to live a stone’s throw from a free babysitter. Sold!

Within a few weeks of moving back to New Canaan and setting some ground rules and boundaries, it became clear that the South of the Y neighborhood was just big enough to withstand a Gelvin-Pescatello family enclave. (And, evidently, my mother was happily situated in her home and had no intentions of selling.)

Luckily, we settled in nicely and started enjoying all that our neighborhood has to offer. Close proximity to Waveny, the schools and the Y were very appealing. My kids enjoyed walking around the Butler-Danvers loop, where we encountered neighbors parading around their much adored dogs. On these walks, my kids would get their “dog fix,” which bought me some time to discern whether I could handle adding a canine to the mix.

Honestly, I found early motherhood incredibly challenging, so I was unsure if I could take on the responsibility of keeping another living thing alive-ish. My houseplants were evidence of my neglect. My kids, god bless ‘em, were hellish newborns, inflicted with severe acid reflux and colic. Think: scenes from The Exorcist, but with more screaming and vomiting. My husband and I were so beaten down by exhaustion and frustration, that it took nearly two years before we liked each child. To love them took a bit longer. We have forgiven our kids for the absolute hell they put us through, though we will never, ever forget. Unless, of course, one of them becomes extremely successful (read: insanely wealthy) and can pamper us in our old age. At which point, all is forgiven and forgotten.

After a few years passed and my children became more self-sufficient and less draining, I thought about rescuing a dog. We had hit a good stride as a family and I had built up a personal energy reserve, though no houseplants were thriving. All I had to do was find the right dog (aka a New Canaan-worthy pooch) and delicately explain to the kids that our collective family dog allergy was fictional.

A well-intentioned friend pointed me in the direction of a socialite-turned-dog-rescue-activist. Let’s call her ‘Blair.’ I reached out to Blair, who was summering in a swanky Hamptons mansion, as you do. I explained how I could provide a wonderful home to a dog in need. After making it through 98 percent of Blair’s extensive screening process, she suddenly dropped me like last year’s Chanel because our expansive yard did not have a six-foot-tall stockade fence. While our top-of-the-line electric dog fence was fully operational, it was unsuitable for Blair and her exceptional canine rescues. Frustrated, I pointed out that no one I know in New Canaan has a dog fortress. Our relationship ended.

My dog search reached fever pitch after someone attempted to break into our home, though it was probably just my mom who forgot her key. Regardless, I was both enraged and unnerved that anyone would threaten our sense of security. Thanks to the full attention of the New Canaan Police Department and its reassurance, I regained my composure. But it was clear, after poking this Mama Bear, that a dog would be an effective deterrent for any intruder, maybe even my mother.

After dealing with two more rescue organizations and their very particular demands, one finally approved us. 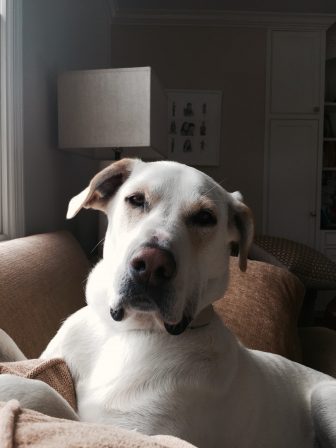 Enter Sadie, a skinny ball of nerves who crawled over to us hoping we would not bite. Sadie was recovering from mange, so she had bald spots and a terrible coat of thin hair. She was not a beauty from the start, yet I had a feeling that she might be The Chosen One.

Mistreated and dumped at a kill shelter in Alabama, Sadie had been through an awful lot for an 8-month-old.

Now that I finally had a dog, the same postpartum anxiety I had with my newborns set in. I was frantic. In bed at night, I fantasized about ways to return Sadie to the rescue. The most plausible was declaring all of us deathly allergic to the her. But I held on to hope.

We had some growing pains, a few behavioral issues and hurdles. I had to barricade Sadie in the kitchen when I went out, but found that she was a champion jumper, able to clear our baby gates with ease. So naturally, l bought even taller baby gates to contain the Bionic Dog (which begs the question: Whose baby is that tall?) After building a massive cage within my kitchen, I felt secure that I had contained the issue. That’s until I came home one day to find Sadie eating, gnawing and scraping away at our drywall near the back door. That little rascal was trying to Shawshank her way to freedom. Not having any of it, I bought sour apple spray to disgust Sadie from snacking on our drywall and tunneling out. 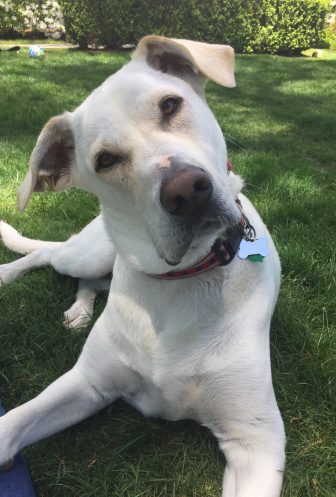 After some time and good behavior, I eased up and released Sadie from the kitchen prison. She was now allowed to roam a bit further. Sadie made the most of her newfound freedom—so much so, that she developed a taste for our TV remote controls. Cablevision was very understanding when I returned no less than three times for new equipment. The lady just looked at me crooked and said, “Puppy?”

Once Sadie and our family became comfortable with each other’s quirks, the dynamic began to work. It is remarkable how much I have grown to love my dog. My kids know that if I am asked who my favorite child is, the answer will be ‘Sadie.’ She has grown into a unique 110-pound beauty and she has taken on the responsibility of keeping most of Putnam Road safe with her perpetual surveillance. We even have an automated alert system when UPS, FedEx, or the mailman dare to stop by. Very helpful. 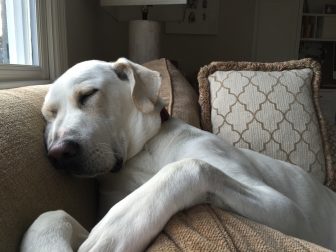 It took a bit longer for my husband to come around. I could not understand why he was so standoffish with Sadie. So I asked about his cold demeanor. He looked at me quizzically and said with all sincerity, “I’m allergic to dogs.”

Me: “Whaaaaaat? I thought we made that up to give the kids an excuse to not get a dog when they were little!”

Turns out the best kept secret in New Canaan is that Mr. Gelvin is actually quite allergic to dogs. But the dog stays, and the husband knows that my mom would take him in, if need be.

Dog rescue and support organizations in our area include: