Key advantages of the Park Street property that the U.S. Postal Service is eyeing for its permanent New Canaan location include parking, traffic flow and the site’s proven workability for both the federal agency and town residents, proponents of the plan say. 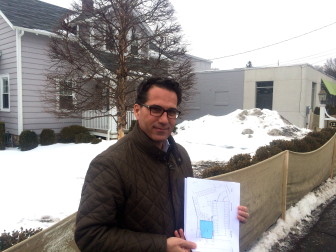 Anthony Giordano stands outside 121 Park St. with a site plan in hand that shows where a proposed new Post Office could stand. The building, as proposed, would run the length of the property and abut the side of Mrs. Green’s, long the home of the local Post Office. Credit: Michael Dinan

Asked for specifics on why 121 Park St. should be seen as a viable contender, Anthony Giordano of Elm Street Partners said that the loading configuration out back of a proposed new building—cited as one reason for rejecting a handful of other sites—is the very same one that the Post Office had used successfully for decades.

“They come in from Pine Street, put their nose here and back in,” Giordano said on a recent morning, pointing across a rear parking lot that also touches Oxygen Fitness and Mrs. Green’s, both on Elm Street Partners-owned property. “Their loading dock was here, and this [new configuration] will be an even easier maneuver for them. Part of the hot button issue with some other locations was having a loading dock of certain size and dimensions. We have that. They [the Post Office] need a ‘man door’ so that the driver can exit a truck and enter the building without coming into the public space. We have that, too.” 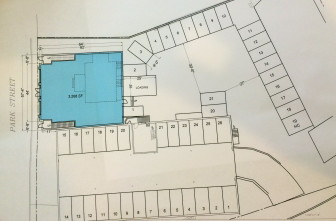 Park Street runs north-south on the left of this site plan, and the long building on the bottom is Mrs. Green’s. The blue area represents the footprint of a proposed new structure. Anthony Giordano of Elm Street Partners said Post Office trucks could come off of Pine Street as they always have and back toward a new loading dock as they’ve been accustomed to doing for some five decades. Specs by Harvey Kaufman Architect PC of New Canaan

The other “finalist” for a permanent location in New Canaan is 16-18 Locust Ave., according to a notice posted Feb. 6 in the Post Office’s window at 90 Main St.

It isn’t clear just how that property would be configured to suit a future Post Office. Number 16 is the town’s municipal parking lot, whereas 18 Locust Ave. is a .18-acre property with a 2,338-square-foot structure on it now. The owner of 18 Locust Ave., which is roughly opposite Joe’s Pizza, could not immediately be reached for comment. 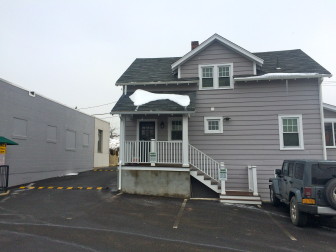 Looking at 121 Park St. from the rear. The front of the building is at grade with Park Street, while the parking area out back dips down, creating a natural fit for a loading dock, such as the one back of what is now Mrs. Green’s, used successfully by the local Post Office for some 50 years. Credit: Michael Dinan

The Park Street lot is .19 acres and Elm Street Partners already has hired a local architect to draw up a rendering designed not only to suit the Post Office’s space needs (said to be 3,000 to 3,500 square feet) but also to align with local planning guidelines.

Under the “Village District Design Guidelines”—created to “ensure that new development fits in well with its surroundings and is in keeping with the village feel of downtown New Canaan”—any large buildings should “have façade articulation that reflects a group of small buildings and reinforces the architectural rhythm established in the Village District core.” The 2010 document calls for brick as one primary siding material.

One rendering of a possible Post Office building at 121 Park St. in New Canaan. Specs by Harvey Kaufman Architect PC of New Canaan

A rendering of a proposed building, by Harvey Kaufman Architect PC, depicts a two-story, brick façade structure with two residential units above (also a guiding principle of downtown planning).

The proposed structure, at 3,268 square feet, would mean building to the Mrs. Green’s building that ESP already owns, closing off a driveway that Giordano said is little-used now, had not been used by the Post Office when it was located on the corner there and in any case offers motorists little opportunity to turn left toward town.

The Post Office’s lease at 90 Main St.—which has proven to be a difficult location for parking in the downtown, a problem that the soon-to-reopen Town Hall is expected to exacerbate—expires in the spring, officials have said. Town, business and government leaders met in November with U.S. Post Office officials to help facilitate the identification of a workable long-term location in New Canaan.

ESP has owned the properties at Pine and Park Streets since 2007. As the end of the Post Office’s lease approached, the agency’s changing space needs (they didn’t need all of the 7,500 square feet in what is now Mrs. Green’s, which also uses 1,500 square feet that had been Hairquarters West) meant remaining at Pine and Park was not feasible. A re-jiggering of space within the existing structure also was unworkable—mostly because the Post Office would have needed to retain the main front entrance as well as the loading dock out back, Giordano said.

Officials all along have called 90 Main St. a temporary solution.

One advantage of the proposed new structure is that its front entrance would be at grade with Park Street, Giordano said, making for easy, ADA-compliant access.

He noted that the Post Office did not offer off-street parking when it stood at Park and Pine Streets. Though the Police Commission changed the limits along Mrs. Green’s on Pine from 15- to 90-minutes, a request could be made for them to be switched back should a good case be made that Post Office visitors need them, Giordano said.
Many of the 2-hour spaces down Pine and 90-minute spaces up along Cherry also are regularly available, he said. New Canaan Parking Bureau officials also confirmed that after 2 p.m., the rule of thumb is that non-permit-holders may use those spaces.

“The real question is: ‘Can the Post Office function here in this location?’ And we will argue that they did for 50 years and for that entire time, there was no on-site parking, that garage [below what is now Mrs. Green’s] was never made public,” Giordano said.

Because the proposed new structure undoubtedly would be over coverage, help would be needed from zoning officials in order to create it, Giordano said.

“I think everyone likes this location because it’s worked for 50-something years, it’s closer to the downtown, you have got great foot traffic and you have got good on-street parking,” he said.

Giordano added: “We are going to need some help. We obviously have a preexisting building with a preexisting site, so I think we will need help from the town, but I think it’s doable if that is what they want to do.”

USPS is calling for New Canaan residents to send comments on either the proposed Park Street or Locust Avenue properties within a 30-day window (through about March 6) to: