Funky Monkey, a children’s games, toys and clothing shop located on South Avenue is closing its doors after a little more than two years in town.

The store at 4 South Ave. opened in late May 2016. It isn’t clear just when it’s closing, whether it’s reopening elsewhere, whether patrons can purchase items online after it’s closed or just why it’s closing. 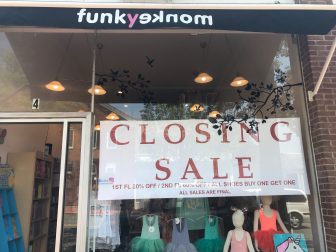 Funky Monkey, a children’s games, toys and clothing shop located on South Avenue is closing its doors after a little more than two years in town. Credit: Catherine Gorey

The business’s owner, Amanda Cui, said only that it’s closing due to future renovations planned for the building, declining to comment further.

The shop offers items curated by Cui, a local mother herself, designed to appeal to children of all ages.

According to a sign in the store’s window, its closing sale is organized based on sections within the store: 30 percent off on the first floor, 60 percent off the second floor, and all shoes are buy-one-get-one-free.

Funky Monkey had been a member of the New Canaan Chamber of Commerce, joining even before its official opening. 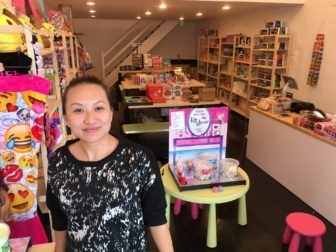 Tucker Murphy, executive director of the Chamber, said it was “certainly a fun little store to have around, with a really interesting assortment of items.”

She added that Cui “really wanted some time off, but mentioned looking for a new space come fall.”

“So be sure to look for some bargains there,” Murphy said.

Origins of Our Constitutional Rights, a Collaborative Lecture Series with New Canaan Museum and Historical Society, Focuses on the 13th Amendment: The Abolishment of Slavery and Involuntary Servitude