After being hired away from Brien McMahon’s program back in April, Rich Hickson knew exactly the type of program he was taking over—one that’s been competitive in the FCIAC on a yearly basis for a long time.

And the opportunity to lead such a program had the new coach just itching for the fall season to arrive. On Saturday, Sept. 10, it finally does. 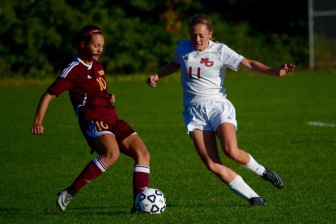 Kelly McClymonds is one of four senior captains along with Madison Starr, Abigail Crowley and Paige Freyre who will help lead the way for the 2016 Rams girls soccer squad. Credit: Amy Murphy Carroll

Hickson inherits a team that, while finishing the regular season 8-8 and on the outside of the FCIAC tournament, reeled off an impressive string of victories in the CIAC Class LL tournament as the #23 seed—knocking off higher seeded Amity, Middletown and FCIAC foe Wilton before eventually being eliminated by another FCIAC opponent, Ridgefield, in the semifinals. And it’s that kind of experience that Hickson would like those who were a part of it to channel and feed off of throughout the Rams’ 2016 season.

“We’re certainly gonna be relying on those kids who got that experience to try and motivate some of the younger players and lend that experience onto them as well,” Hickson told NewCanaanite.com. “They know what it takes and what they need to do to get there. And, hopefully, we can use all of that as reason to make it to FCIAC’s this year as well another extended run at states.”

But as with many years, the group who makes up this year’s team is filled with both familiar and fresh faces. After 10 seniors graduated from that 2015 team—including starting goalkeeper and co-captain, Katie Donovan, two starting defenders in co-captains Mia Carroll and Caroline Gordon, as well as midfielder and co-captain Sami Stewart—Hickson will look for the program’s veterans to increase their roles and elevate their play to that next level. Then he’ll also be relying on those fresh legs to the varsity program to make their presence known right away. 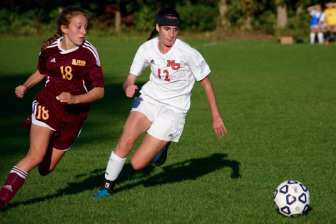 Leading the squad will be its four senior captains—Madison Starr, Kelly McClymonds, Abigail Crowley, and Paige Freyre. All of whom will be “very influential,” according to their coach.

“Each and every one of them has been fantastic so far with me being new to the program,” Hickson said. “Just from practices and scrimmages they’re certainly stepping up as leaders and role models and showing the others how it needs to be done. And in regards to myself, they’ve been really helping me out with getting familiar with the program and school in my efforts to get acquainted with everyone.”

Starr and Freyre are set to lead the team from the front, whether it be as a forward or midfielder, while McClymonds will man her post at center-midfield and Crowley directs from the back line on defense. The four captains have all been a part of the varsity program for multiple years and that experience, along with fellow senior Abigail Deery’s, will aim to be of great significance in this team’s efforts, both on and off the field.

But the experience doesn’t just lie with the Rams’ senior class. Nine other players return from last year’s squad and their talents are going to be key to determining how the 2016 season goes for New Canaan. Among them are juniors Braeden Dial and Julia Ozimek, both of whom played significant minutes for the Rams as sophomores in 2015, and already have caught the attention of  their new coach with Hickson pegging each to be “strong players.” Then rounding out the group of returnees are fellow juniors, Zoe Jones, Katherine Reiss, Maeve Selvaggi, Eliza Farley, Eliza Pohle, Freia Mierendorf and Molly Mazabras. 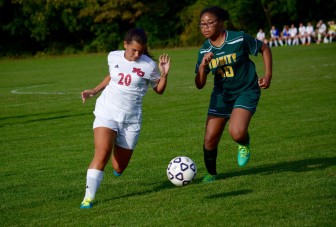 2016 co-captain Paige Freyre pushes the ball upfield on her way to scoring a goal in a game vs. Trinity Catholic on Sept. 21, 2015. Credit: Amy Murphy Carroll

And to add to that talented, experienced depth are 10 more student-athletes ready to make their impression on the acclaimed program, including two vying for the coveted spot of starting goalkeeper. Juniors Katie Kennelly and Jackie Newlin are set to make their varsity debuts this season and they’re joined by a group of seven sophomores—Lauren Canet, Bridget Salmini, Kendall Patten, Lauren Bisceglia, Olivia Cosco, Caroline Schuh, and goalkeeper Jordan Patterson—all of whom are eager to contribute anything they can and reward their new coach’s faith and confidence in them to have a spot on this roster.

Patterson is one candidate to fill the void left in net by the graduated Donovan with junior Kendall Curtin being the other. Hickson admits to seeing positives from both throughout the preseason as, collectively, only one goal has been allowed in two scrimmages, making his decision as to who starts game one a tough one. Which is why he welcomes the ability to have a little bit more practice time to get an extended look at each before giving one the nod in the opener on Saturday.

The preseason has actually shown Hickson positives all around.

“We’ve been running them through a bunch of different formations and they look fairly comfortable with them,” Hickson said. “They’ve been passing the ball around well. And if we can start putting the ball in the net more, hopefully that’ll lead to good things happening for us.”

But an FCIAC vet like Hickson knows that preseason opponents can only go so far in preparing his team for the challenges they’ll face in conference play. In his 10 years of being involved with soccer in the U.S. after coming over from his native England, Hickson has spent eight seasons with FCIAC teams. He was an assistant to Dave Flower, the longtime head coach at Westhill from 2008-2012 in addition to his three years (2013-2015) as head coach of McMahon. So he’s well aware what lies ahead for his new team.

“It’s always a competitive league [the FCIAC],” Hickson said. “St. Joe’s has consistently been up there. Staples I would imagine will be a contender or thereabouts, and Ridgefield as well. There are a number of very competitive programs. So pretty much every game you’re going in to is going to be a tough one—there are no givens.”

And to get through the daunting task that is an FCIAC season, Hickson stresses that it will take a total team effort.

“I don’t want to pin the season on a small number of players. I really think that anything we do achieve is going to be done so as a team. We got to make sure everyone works together. We can’t be relying on one or two players to take us where we want to go.”

And where they want to go is back to the playoffs–both FCIAC and states. And to get there, Hickson notes that in addition to team effort, it will also require organization on both sides of the field and taking advantage of the opportunities that they’re given.

“Anytime we get in front of the goal we’ve got to be ruthless,” Hickson said with a smile.”

The girls’ season gets underway with a home contest Saturday against Danbury at Conner Field at 4 p.m.