With their proximity to New York City, many suburban communities in Fairfield County can stake a claim to Hollywood—sometimes tenuous connections of actors passing through or keeping residences, or big screen scenes shot in town.

That said, perhaps no town in our area has as many legitimate ties to Tinseltown as New Canaan. And perhaps no resident embodied these ties better—or longer— than Academy Award winning actress Eileen Heckart.

Heckart—a New Canaan resident for 40-plus years, from 1960 until her death in 2001—was a celebrated star of stage, screen and television. With an acting career that spanned more than a half-century, Heckart starred opposite screen icons such as Paul Newman, Marilyn Monroe and Sophia Loren. First nominated for an Academy Award in 1956’s The Bad Seed, Heckart took home the Oscar for Best Supporting Actress for her performance in 1972’s Butterflies Are Free. 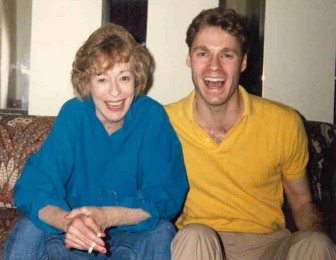 “She was certain that she was not going to win,” Heckart’s son Luke Yankee told NewCanaanite.com. “Everyone thought that Shelley Winters was going to win for The Poseidon Adventure.”

Yankee, himself an actor, producer, director and playwright wrote a memoir about his mom called “Just Outside the Spotlight: Growing Up With Eileen Heckart.” He remembers Heckart was so terrified, she spent most of the afternoon leading up to the Oscars sick to her stomach in a hotel room bathroom. But just before her category was announced, Heckart had a moment of clairvoyance. 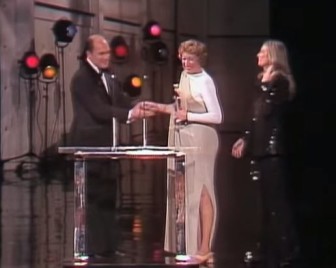 “She suddenly took off her glasses and put them in my father’s lap,” Yankee said. “And he knew she couldn’t see three feet in front of her without them and was like ‘What are you doing?’ And she said ‘I’ll tell you later.’ She told me later that she had like a sixth sense that she was going to win.”

Yankee—then a 13-year-old—was at home watching the Oscars. As soon as Heckart won, the Yankee household was besieged with phone calls. 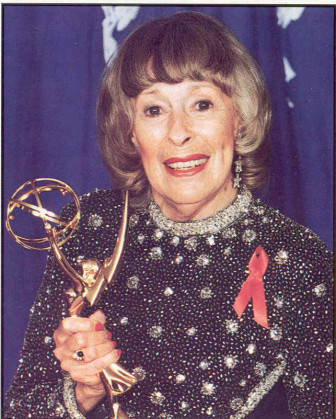 “The phone started going crazy,” Yankee recalled. “I started fielding calls from reporters all night long. It was a very heady experience. And I loved every minute of it.”

Despite her Oscar win, Yankee says Heckart continued to live completely unaffected by the added acclaim.

“She never saw herself as a celebrity,” Yankee said. “She saw herself as a hard-working character actress. She used to say, ‘Thank God I don’t have Elizabeth Taylor’s problems.’ She could go into Walter Stewart’s or Silliman’s or the Whitney Shop. She loved all of those places, and she could just be Mrs. John Yankee.”

One day Heckart decided to have a yard sale at her house on Comstock Hill Road. Word quickly got around the area that the Oscar-winning actress was selling off her unwanted items, attracting a large contingent of bargain hunters and film fans. 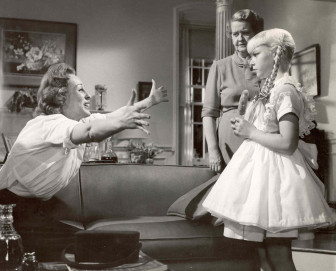 Heckart was first nominated for an Oscar for her performance in the Bad Seed. Credit: Contributed

“People came from far and wide to see if Eileen Heckart’s yard sale crap was any better than everyone else’s,” Yankee said.“And it wasn’t.”

Yankee recounted how one attendee tried lowballing Heckart—stationed at the foot of the driveway with a cash box, two packs of True Blue cigarettes, a pitcher of Nestea and a box of donut holes (“That was enough to keep her going for the entire day,” Yankee said)—for a folded oriental screen that was marked for $5.

“He says, ‘Yeah, you’re Eileen Heckart. I saw you in that show once. I see you have this screen marked for five bucks. I’ll give you a buck-and-a-half for it. Whattaya say?’ She thought about it and since it was the end of the day, she was trying to get rid of stuff, so she agreed,” Yankee said.

Yankee remembered that the man then took out a pen and asked his mom if she would autograph the screen as well.

For better or worse, no film is more closely associated with New Canaan than Ang Lee’s 1997 drama The Ice Storm. Filmed entirely on location, the production starring Kevin Kline and Sigourney Weaver turned the community upside-down as trains, streets and stores closed and controversy brewed for weeks.

The content of the film, based on Rick Moody’s book of the same title, also stirred things up as Lee’s somewhat downbeat, dysfunctional take on New Canaan life in the “Swinging ’70s” was not well-met by locals. All that said, the movie garnered generally favorable reviews and provides some fascinating glimpses of town, from the magnificent modern homes up on Laurel Road to the village, the library, Varnum’s Pharmacy and the train station. Longtime townies will note many inaccuracies in the film, for example, the inclusion of the Cherry Street extension, the two Waveny water towers and the library expansion—all not completed until several years after the film’s events took place.

Things would run a little smoother a few years later when The Stepford Wives was shot in town. The 2004 remake starring Nicole Kidman, Matthew Broderick and Bette Midler transformed “The Next Station To Heaven” into a horrific hotbed of sinister science fiction, where not everything is as it seems. Most recognizable to New Canaanites are the scenes shot in front of town hall. Be sure to notice the sign, altered to say “Town Hall and Offices of Stepford” and look for some of your friends and neighbors who might have been extras.

Waveny has seen its fair share of time on the big—and small—screen. Featured in The Stepford Wives and The Ice Storm Waveny was also the location of the fictional ‘Cortlandt Manor’ in All My Children. Coincidentally, Waveny was the childhood home of movie star Christopher Lloyd—best known for portraying the character “Doc” in the Back to the Future trilogy. Lloyd is the grandson of Texaco founder Lewis Henry Lapham, and his mother Ruth Lapham Lloyd sold Waveny to the town of New Canaan in 1967, about a decade before her son made his film debut in the Oscar-winning classic, One Flew Over the Cuckoo’s Nest.

The grandson of Hollywood mogul Samuel Goldwyn, Tony Goldwyn is quite literally Hollywood royalty. The star of dozens of films, including Ghost, Nixon and 2014’s hit Divergent, Goldwyn has lived in town for almost 20 years. Goldwyn is also an accomplished director, having piloted several movies and TV shows.

Longtime New Canaan resident Paul Simon has made an immeasurable impact in the music world, and his success there has carried over to the silver screen. Simon’s compositions made up the soundtrack of the hit 1967 film The Graduate, starring Dustin Hoffman and Anne Bancroft. Simon himself took a turn in front of the camera in a small—but pivotal—role in Woody Allen’s Annie Hall, which won the Academy Award for Best Picture in 1977.

Another musician who has made the transition to film is Simon’s westside neighbor Harry Connick, Jr. The crooner first graced the screen in 1990’s WWII piece Memphis Belle, and has gone on to appear in more than a dozen films, including Little Man Tate, Independence Day, Copycat and Basic. The Grammy Award winner is currently a judge on American Idol.

New Canaanite Katherine Heigl was a student at New Canaan High School when she starred in 1994’s My Father the Hero with Gérard Depardieu. Since then, Heigl has achieved worldwide commercial and critical acclaim with roles in films such as Knocked Up and The Ugly Truth and the television show Grey’s Anatomy. She is now starring in NBC’s State of Affairs, a political/espionage thriller that reunited her with fellow NCHS alumnus Adam Kaufman.

Martha Scott was the original Emily Webb in Thornton Wilder’s play Our Town, a role that she reprised in her film debut in 1940 for which she earned a Best Actress nomination. A New Canaan resident for fifteen years in the 1950’s and 60’s, Scott appeared in more than 20 films, including Ben-Hur, The Ten Commandments with Charlton Heston and Sayonara opposite Marlon Brando.

David Letterman was a familiar face around town in the 1980’s and 90’s when he lived in town. Although he is best known for his late night talk show, Letterman did host the 67th Academy Awards in 1995. Actors Christopher Meloni, Allison Williams and Martin Mull have each called New Canaan home at one time or another.

Two 1968 movies were filmed in town—The Swimmer starring Burt Lancaster and The Secret Life of an American Wife with Walter Matthau. Other films shot in New Canaan include 1998’s The Object of My Affection, which features several picturesque scenes in the Silvermine area, and most recently 2013’s Louder Than Words with David Duchovny showcasing several shots of the train station and Main and Elm Streets. 2008’s Revolutionary Road and 2009’s Made For Each Other also had scenes that were shot in New Canaan.

Last, but not least, New Canaan makes a somewhat dubious appearance in the film classic, Gentleman’s Agreement starring Gregory Peck and John Garfield. The 1947 Academy Award winner for Best Picture is a searing indictment of antisemitism, mainly situated in neighboring Darien. There is one scene where Peck’s wife, played by Dorothy McGuire notes that “it’s even worse in New Canaan. There, nobody can sell or rent to a Jew.”