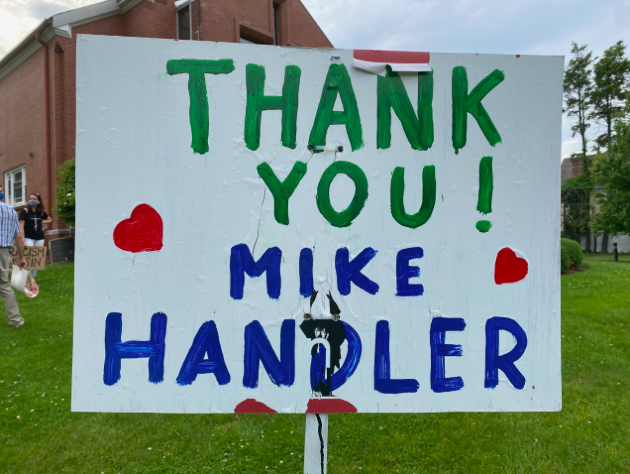 Former New Canaan Emergency Management Director Mike Handler, ousted by First Selectman Kevin Moynihan this week, on Friday morning issued a statement saying the latter has lied about the circumstances of his dismissal.

While “saddened” by Moynihan’s “hurtful and baseless allegations,” Handler said in a written statement, “I trust that my 20 years of public service to our Town stand on their own and speak louder than his lies.”

“I cannot thank you all enough for your support, but I will not engage at Mr. Moynihan’s level,” Handler said in the statement. “The good of the Town must come first. We must not forget that we are in the midst of a monumental human rights movement, a pandemic, and unprecedented unemployment.”

The popular and widely respected emergency management director resigned Wednesday at Moynihan’s request. The first selectman has hinted that Handler somehow mistreated town employees while helping guide New Canaan through the COVID-19 public health emergency, though it hasn’t been made clear what happened that would merit dismissal.

New Canaanites have reacted strongly on social media and local news comments threads, saying they’re shocked by Handler’s ouster and seeking a way to have the volunteer reinstated. Many in New Canaan came to know and trust Handler through what had been nightly town-wide updates on COVID-related cases, deaths, closures, public policy and testing.

Moynihan said during a press briefing Thursday that he had received complaints over time regarding Handler, from Health Department staff “among others.” After NewCanaanite.com filed a public records request to review the complaints, Moynihan responded by email Friday morning saying such complaints are “rarely made by email” and that they rather are “made verbally by phone and in person and with tears.” On Friday afternoon, town officials said a search showed there were no emails from health officials to Moynihan for the week prior to Handler’s dismissal that complained about him.

[Note: This article has been updated with information regarding New Canaanite’s public records request to view the complaints referred to by the first selectman.]