After the neighbor of a Valley Road hospital who also sits on the Planning & Zoning Commission wrangled with an architect over a multi-faceted application during a recent public hearing, an attorney representing the nonprofit institution called out the commissioner, objecting to the way he participated in the proceeding. 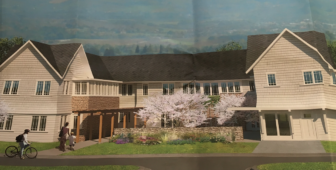 Thanks largely to open communications with Silver Hill Hospital President and Medical Director Dr. Sigurd Ackerman, members of the Silvermine River Neighborhood Association—a group that formed following a long-running legal battle involving the psychiatric facility—issued no objections to a new plan to rebuild an admissions building and make some other changes, attorney Michael Sweeney said during P&Z’s most recent meeting.

“Dr. Ackerman called a meeting with the group, worked through the application with the group, there were comments, and he also reached out to other sections of the various neighborhoods around the property, including up on the hill and to the side, had separate meetings with several neighborhood who called with questions and the silence from the room speaks to what a good job he did,” Sweeney told P&Z commissioners during their June 28 meeting, held at Town Hall.

“The sad part about this is that Mr. [Kent] Turner never elects to participate. He has not joined the Silvermine River Neighborhood Association and has not reached out to the hospital, and we invite him to do so. We are happy to have a dialogue with him, but given the fact that he argued strongly to sit on a dais today, as a commission member, and also argue against this application—it is not the first time it has happened—I have let it go in the past, but I object.”

The strongly worded comments came at the very end of a hearing that saw Turner take to the podium and accuse Richard Turlington of New Haven-based Richard Turlington Architects Inc. of misrepresenting the view from Valley Road of a proposed new admissions building. Even after P&Z Chairman John Goodwin appeared to close the public comment period and open up discussion on the application among commissioners only, Turner pursued a separate line of questioning about plans to expand parking at Silver Hill.

Ultimately, P&Z approved the application and Turner at that final section of the item recused himself from the formal vote.

During the hearing, identifying himself as a resident of Valley Road, Turner told Turlington that a rendering of the proposed new building at Silver Hill was “a little deceiving” since it showed only one short side of the building.

“That is not an accurate presentation,” Turner said.

When Turlington responded that the purpose of the rendering was to show that the house would not appear much differently from the way it does now from Valley Road, Turner said, “I think that may be a little debatable.”

He added: “The simple statement is that it is not an accurate representation.”

Turlington said it was “disingenuous” of Turner to make such comments.

Turner replied: “I am an architect and I live next door to the property, I know what goes on and what has been going on for the past 11 years, so my statements are fact.”

Goodwin urged Turner to move on at that point. Later, the chairman instructed Turner to communicate his thoughts to the hospital through a letter.

As P&Z took up the item, Goodwin asked the town planner who was noticed for the application in order to determine which commissioners would participate in the public hearing. Turner at that point asserted: “I believe I am allowed [to participate].”

When the town planner said he would need a formal opinion from the town attorney to settle the matter but that he believed Turner could not actively sit in on the hearing, Turner said: “I want a second opinion.”

Turner sat silent for much of the beginning of the public hearing, while commissioners put questions to Turlington, Sweeney and Ackerman about parking, use of the new building, traffic flow and lighting, among other matters. Turlington and Sweeney stressed repeatedly that Silver Hill long has worked toward fostering a collaborative relationship with neighbors and has been sensitive to the eastern New Canaan area where its campus lies.

“Part of the hospital’s uniqueness has to do with its location, and the hospital is as invested in maintaining the character as all of the neighbors,” Sweeney said.

Eventually, P&Z commissioner Dick Ward—who himself in May faced accusations of bias as a resident of the Philip Johnson Glass House’s neighborhood when that organization came before P&Z in the spring—suggested that Turner give his view as “an informed neighbor.”

P&Z voted unanimously to approve Silver Hill’s application after Laszlo Papp made a motion for approval “because it conforms to the commission’s original request for neighborhood support, which it received.”