Since last month, Hannah Socci, a rising senior at New Canaan High School and regular runner at Waveny, has been eyeing the new trail that workers began carving out of the hill that rises alongside a blind turn in the main road through the park, opposite the Orchard softball field. 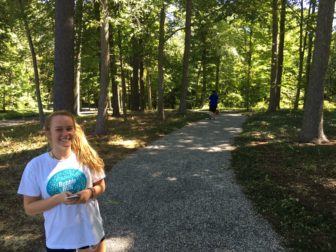 Hannah Socci is a fan of the new trail at Waveny that’s designed to get pedestrians out of the road along a particular dangerous blind stretch. Credit: Michael Dinan

“It’s all we had for options,” she said on a recent afternoon during a brief break from her run. “When I saw this come in a few weeks ago, I was so excited. It’s safer and it’s better on your knees, also. So I personally am a total fan of it. I think it looks great. It’s not straight, the way it curves—it looks pretty natural. It’s very aesthetically pleasing. I think it’s the greatest thing.” 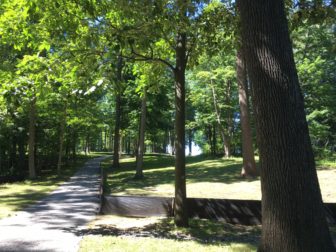 Looking up the new trail from its western end, just past the traffic island where the Carriage Barn access road comes into the main road through Waveny. Credit: Michael Dinan

Designed and funded by the Waveny Park Conservancy as the organization’s first big project following formal approval from town officials last month, the new trail is receiving wide use and high praise from leash-holding and baby-stroller-pushing walkers as well as runners at the popular town park. 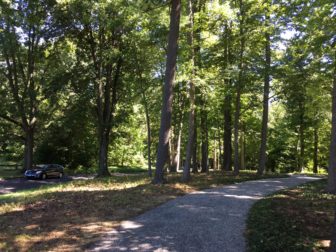 The gently rolling trail has opened up a previously disused parcel within Waveny Park. It was designed by local landscape architect Keith Simpson of the Waveny Park Conservancy. Credit: Michael Dinan

On seeing the trail for the first time, New Canaan’s Jim Zech, a park regular for nearly 30 years, noted that it serves a specific purpose “to get people off of the road here, because it shoved you over there.”

“I know a lot of people think they’re paving over Waveny, but I think these paths get a lot of use,” Zech said. “I think it looks pretty nice.”

Saying he also thinks highly of the Flexi-pave path that circles Irwin Park, Zech said he’s interested to see how well the new trail at Waveny will hold up over time.

Gently curving around trees after large patches of invasive vegetation had been removed, the trail was designed by New Canaan-based landscape architect Keith Simpson, a board member of the donor-supported conservancy, and it opens up a hill that long had been disused and offered little to the eye. The work itself was done by Bedford Hills, N.Y.-based Cambareri Masonry following approval by the Board of Selectmen of a $27,515 contract with the company—funds raised by the conservancy.

The larger-picture plan for the trail includes crossing the entrance to the first parking lot (on the left as motorists climb the hill past the Orchard Field), then running through the tree-lined island there, closing off what the conservancy has deemed an unnecessary second entrance so it’s also pedestrian-friendly, and then crossing the parking lot entrance closest to Waveny House before connecting to parkland again.