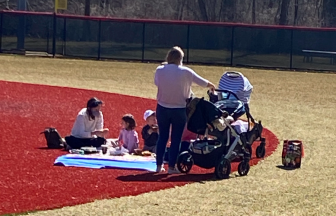 Families with little kids setting up picnics on the newly turfed baseball fields at Mead Park. Photo published with permission from its owner

If the signs and warnings don’t work, the next step will be to lock up the little league fields so no one can enter and provide New Canaan Baseball coaches with keys so they’re used only by the organization, according to Recreation Director Steve Benko.

“The problem is these mothers come to the playground and they come with the kids and bring a stroller and then they want to be out in the sun and the kids come onto the field and run the bases, which is fine, but then the kids lay down and they set up there and have snacks,” Benko said when asked about the problem. Also recently, Benko said he had two dog trainers working with service dogs on Mellick and Gamble Fields.

Families with little kids setting up picnics on the newly turfed baseball fields at Mead Park. Photo published with permission from its owner

“It’s been an issue and we’ve asked people not to bring food on the field—I’ve already put signs up at both gates,” Benko said. Now, the longtime rec director said he’s bringing in even larger signs that originally were posted at the new turf fields at New Canaan High School.

Brian Rogers, co-president of New Canaan Baseball, said the turf fields project from 2018 cost about $1.3 million in a public-private partnership that saw the town contribute more than $500,000.

This is the first spring since the new turf fields went in that New Canaan Baseball has had this problem, Rogers said.

“We were hopeful it would go away but it appears to be intensifying,” he said, adding, “I thought this was a one-off but it’s not a one-off. It’s a practice now. People think it’s OK.”

Rogers said representatives from New Canaan Baseball have addressed the families disregarding the rules about field use but that their behavior hasn’t changed.

He estimated that there are at least 20 to 30 local people who are making use of the turf fields as a picnic area.

“They have been asked not to do it and to go some place else in the large park that is there,” Rogers said. “But they like to do it in the middle of the field and we have to go in and pick up trash and ice cream sticks off the middle of the mound.”

He added that there are areas with benches, tables and umbrellas—such as the colonnade area—for families who want to use Mead Park for picnicking, not to mention other parks in town such as Irwin and Kiwanis.

“There’s so many options to do this,” Rogers said. “I would never think of doing that. That would be like me going to the playground area and lighting up a cigar. It’s just not something you do.”

Plans to overhaul the little league baseball fields at Mead were publicly unveiled in 2016, and were scaled back the following year to due to unexpectedly high cost estimates. The turf infields were opened in the spring of 2019.

One thought on “‘I Would Never Think of Doing That’: New Canaan Baseball Wrangles with Local Families Picnicking on Turf Fields at Mead”