Officials with the nonprofit organization that oversees youth baseball in New Canaan on Wednesday unveiled a dramatic plan to improve the little league baseball fields at Mead Park with larger dimensions and new fences, light poles, bleacher areas and scoreboard. 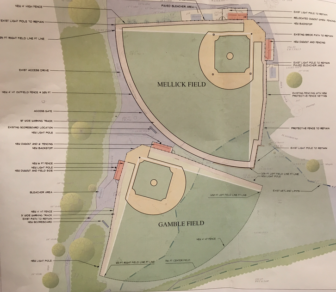 New Canaan Baseball also is seeking to reorient Gamble Field so that home plate is located where left field currently sits and the diamond fans out in the same general direction as Mellick, according to the organization’s president, Jim Higgins.

“Our overall guiding principle in terms of what it is we wanted to accomplish was we wanted to stay generally within the footprint of what is there,” Higgins told members of the Park & Recreation Commission at their regular monthly meeting, held at Lapham Community Center.

“We are sensitive to reorganizing anything or disrupting any other part of the park, so the plan that we have come up with is substantially within the existing boundaries of the two fields. A couple of the key goals were drainage, trying to get state-of-the-art drainage and the right materials underneath the grass, because we lose a lot of game days due to rain—and not just on the days it rains, but the drainage is not as good as it could be. Another key thing is to figure out if there’s a better way to utilize Gamble. Gamble is a very challenging field from, in our opinion, a safety standpoint. Just the way that it is currently configured, you can really only access the first base dugout by walking through the third base dugout and it’s not a good area, they are swinging bats, the whole spectator area down the left field line is pretty dangerous from balls and there is no protection and the sight line is not good. From a safety standpoint, we looked at how can we make Gamble a better field with better sight lines and better from a safety perspective for players and for spectators.”

Ultimately the commission voiced support for the proposal as a concept, though it put off a formal vote until members could walk the property with the proposed new dimensions staked out and could hear more final details from the organization.

“I think it’s a wonderful plan but it would be good if we could walk it,” Park & Rec Chair Sally Campbell said.

First broached with the commission 18 months ago, New Canaan Baseball’s plan would be funded entirely by the organization and, if approvals come in as hoped, could take place next fall with an eye on debuting for the spring 2018 season, Higgins said.

He was joined at the meeting by fellow board member Brian Rogers and Kendall Horch of Wilton-based McChord Engineering, a firm that sketched out a vision for a future little league field campus.

Under the plan, Mellick Field would shift back toward its backstop while staying within the current fence line, expanding from a dimension of 185 feet to 205 feet, Horch said. Gamble would expand from 185 to 200 feet, she said.

Higgins said it isn’t clear yet just how much the project would cost though New Canaan Baseball now is working with a $500,000 estimate (and has spent some $50,000 for the engineering studies already commissioned). Higgins said he’s had preliminary conversations with Recreation Director Steve Benko and Parks Superintendent John Howe. A portion of Gamble Field contains wetlands, so there potentially are restrictions on just how it can be filled or graded, while only a small portion of Mellick Field (out toward the left field corner) has wetlands, Higgins said.

The biggest visible change under the proposal for longtime New Canaanites is the reorientation of Gamble Field.

Commissioners asked whether there was a regular-sized field for the league in which New Canaan plays (the town currently cannot host state tournaments because the fences now are less than 200 feet), whether the new fields would impact the approved bocce courts at Mead (no), whether existing scoreboards would be used (yes for Mellick, new one for Gamble), whether the reconfiguration would require cutting into the hill west of the ball fields that leads to the train tracks (no), whether trails that lead into the Bristow Bird Sanctuary will be preserved (yes) and whether the size of the dugouts would change (no they’d use the very same canopy dugouts, which are set in asphalt).

Commissioner Jason Milligan noted that Park & Rec in the past had supported New Canaan Baseball’s plan to create a new varsity baseball field at Waveny that never materialized because the organization couldn’t pull together the funds.

In response, Higgins said that New Canaan Baseball has some more work to do to find out just how much the Mellick/Gamble project will cost, but that about $200,000 already is in hand.

“It’s not a pipe dream, but we can’t even start fundraising until we have all the approvals,” he said. “It has to be a real project.”