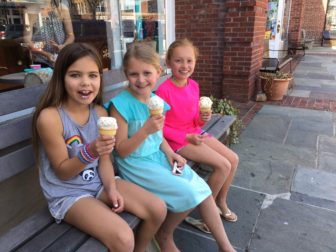 The trio had spent part of the morning at a beach in Westport, where they participated in a photo shoot on the fabulous Beachmate system (a local family’s invention), and then came back to sun-dappled New Canaan for their cool treat.

“This is one of my favorite spots,” Phoebe told NewCanaanite.com before going back to her Icing On the Cake-flavored ice cream cone. “We’re just enjoying the weather.” (Olive also got Icing On the Cake—asked what flavor she had, Morgan answered, “I have no idea.”) 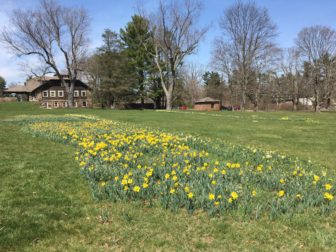 The daffodils are blooming at Irwin Park, on April 11, 2017. Credit: Michael Dinan

As temperatures climbed into the 70s in New Canaan—and less than one month after a winter storm dumped about a foot of snow here—locals enjoying April break at home headed into town and out to the public parks to relax and reconnect with nature and each other.

“Everyone comes out of the woodwork and enjoys the beautiful day—it finally feels like summer is here,” New Canaan’s Andrea Reid said from a favorite family spot, Irwin Park, where she joined a friend and watched over her kids, 5-year-old Asher, a New Canaan Community Preschooler, and Morgan, 2, who attends the preschool at United Methodist Church (the writer’s alma mater). 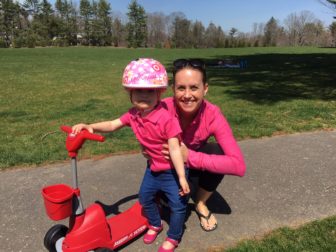 “We love to come here and walk because it’s safe, it’s easy, the kids don’t have to worry about cars,” Reid said as her kids made their ways along the Flexi-pave path near Gores Pavilion on scooters. 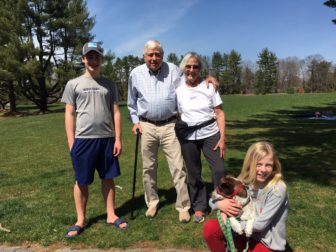 The Thomases visit Irwin daily—Beverly called it “My favorite place in the world”—and on such a picture-perfect day the park is “absolutely spectacular—the best,” she said. 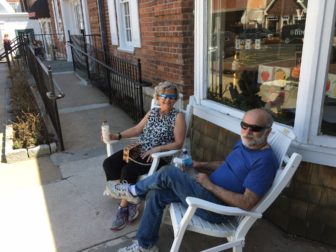 “It was such a beautiful day we had to take a walk,” Judy Gilroy said. “It’s the first day of summer to me.”

They sat in Against The Grain rocking chairs outside of New Canaan Olive Oil, near the “50-yard-line” of Elm Street.

“We love these,” she said of the rockers. “They have a rocker in front of the store [on Main Street] that I love.” 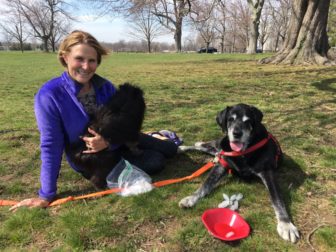 Locals also could be seen stretching out on blankets and towels at Waveny, from the newly painted youth soccer fields north of the main road through the park, and throughout the Waveny Park Conservancy’s focus areas south of the same road.

Darien’s Kathy Synnott called Waveny “a treasure” as she relaxed with her dogs, an approximately 12- to 14-year-old rescued Pomeranian, Gypsy, and Cole, a black Labrador who has achieved the age of 16 years and nine months. 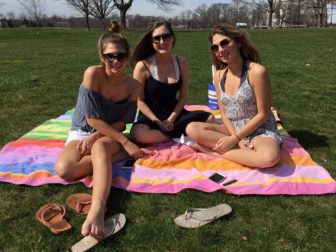 Nearby, New Canaan High School seniors Maura Kelley and twins Katherine and Anna Shelden were soaking up the sun.

The soon-to-be NCHS alumni said they’re spending the April break at home and typically choose either Waveny or Weed Beach in Darien.

“This is better,” Katherine said. “It’s beautiful out.”

2 thoughts on “‘It Finally Feels Like Summer’: Locals Head to Downtown, Parks As Temps Soar into 70s”