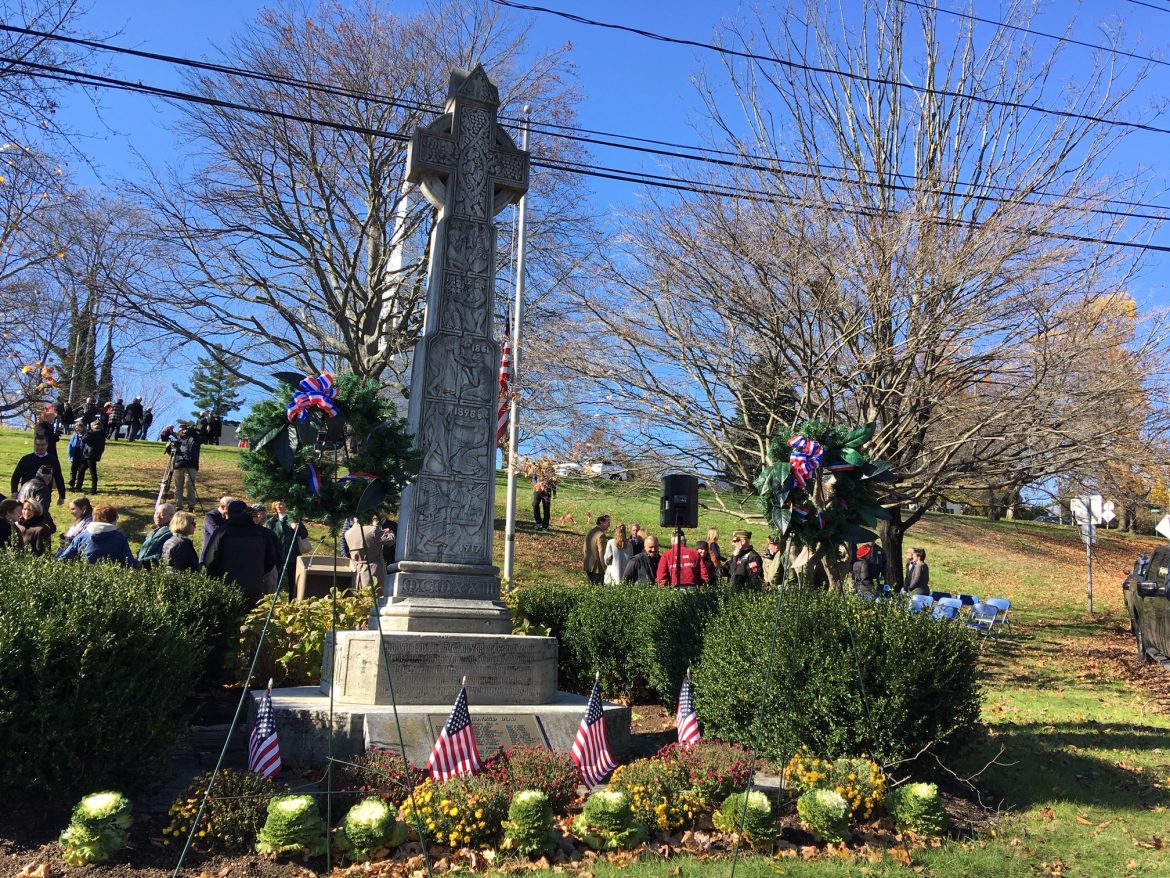 The Town Band led two parades in New Canaan on Nov. 11, 1918, the day the Allies of World War I signed an armistice with Germany to cease hostilities on the Western Front. Church bells had started ringing out at 3 a.m. that Monday in New Canaan, historians say, bonfires were lit and the townspeople burned Kaiser Wilhelm II in effigy. 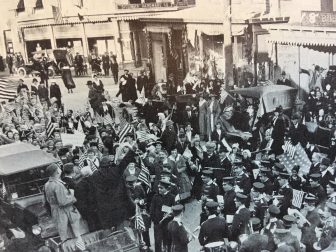 The war was over, signaling both the return of New Canaanites serving overseas and the end of deliberate austerity to support the Allies’ efforts. Food shortages had led to the launch of a Canning Club out of Center School’s kitchen. Local Red Cross volunteers had taken over the assessor’s office at Town Hall to sew, knit and create comfort bags for servicemen. To conserve coal, New Canaan Library had closed for two months and Center School merged classes in order to shut some rooms. The Congregational Church’s meeting house grew so cold that its pipes burst, forcing Sunday services upstairs, and the town in early 1918 launched “heatless and lightless Mondays” and, later, “gasoline-less Sundays.”

Yet it would take about four years for New Canaan to settle on a memorial to its World War I soldiers. Some early plans were scuttled—such as for a plaque affixed to a boulder, a wing added to Town Hall or a granite shaft installed in front of the municipal building on Main Street. 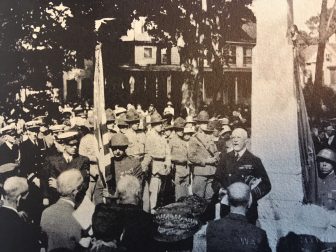 Eventually, a sculptor who had been a student of Gutzon Borglum, Frances Adams Kent, designed a stone cross to honor New Canaan veterans of four wars. The “Wayside Cross,” as it is known, was unveiled Sept. 9, 1923.

On Sunday, New Canaan’s Lisa Melland—regent of the Hannah Benedict Carter Chapter of the Daughters of the American Revolution—noted that local civic organizations and town officials in 1923 embedded a time capsule into the cornerstone of the Wayside Cross.

“Maybe some day we will have a chance to see what is in that time capsule and experience what our fellow New Canaan citizens were feeling at that moment in history,” Melland, standing before the Wayside Cross on a crisp, clear autumn day, told more than 300 residents and town officials, including dozens of veterans, during New Canaan’s annual Veterans Day observance at God’s Acre. 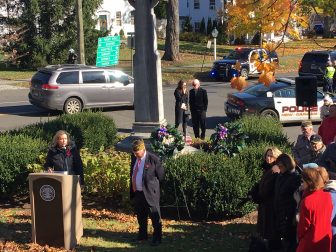 Lisa Melland of the Hannah Benedict Carter Chapter of the Daughters of the American Revolution, at God’s Acre during the Nov. 11, 2018 Veterans Day observance. Credit: Michael Dinan

“Some consider World War 1 ‘the forgotten war’—perhaps because only a few decades later, our nation would fight in an even larger conflict, World War II, where three times the number of the American troops were mobilized and even greater support was needed on the home front. Well, today, it is not a forgotten war and we remember all those who fought in the Great War, the ‘War to End All Wars,’ on this 100th anniversary of the Armistice. We thank them and all veterans for their service to our country. Please know that we value your sense of honor, duty, integrity and service to our great nation.” 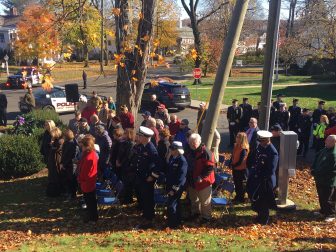 Led by New Canaan’s Peter Langenus, commander of VFW Post 653 and a U.S. Army captain in Vietnam who also served as a colonel during Operation Desert Storm, the annual ceremony featured the presentation of the colors by the New Canaan Police Department Color Guard, opening prayer led by Chaplain John McLane, a U.S. Army captain in Vietnam, placement of wreaths by DAR members at the base of the Wayside Cross, keynote remarks by Commodore Peter Jensen of the Coast Guard Auxiliary, recitation by Langenus of the poem “In Flanders Fields” and, after a tolling of the bells, the reading aloud of the names of New Canaan veterans who have died since Veterans Day last year.

Selectman Nick Williams thanked those in attendance for coming out on a “special day” before introducing Jensen. A graduate of Boston University who earned master’s degrees from Princeton University and the Army War College, Jensen heads the Coast Guard Auxiliary’s Force Readiness Command, and also serves as a search and rescue pilot, Williams said. After his time on active duty with the U.S. Navy, Jensen was a career U.S. Foreign Service Officer with overseas assignments to Belgium, South Africa, Taiwan, Turkey, the Netherlands and Switzerland, Williams said. 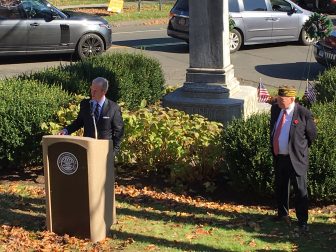 In his remarks, Jensen said that most Americans today are familiar only with the “broad brush strokes” of World War I. Yet due to technical advances such as poison gas, flamethrowers, machine guns, tanks, long-range artillery, aircraft and submarines, WWI’s aftereffects not only led to unprecedented death and destruction, Jensen said, but also “would shape the rest of the 20th Century.” 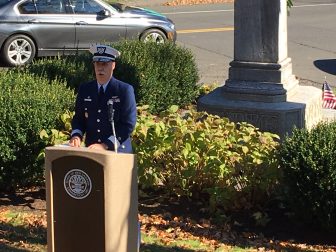 Jensen reviewed some of the major events that led to the Armistice as well as the origin of Veterans Day, and also noted “some interesting insights about the American forces from the German perspective.”

For example, Jensen said, one highly decorated German colonel who had fought against multiple nations’ armies through more than 80 battles said he found the American forces “the most honorable among all our enemies, and also the bravest.” Another observer praised the attitude of American officers toward enlisted men, whom he referred to as “wonderfully mild-mannered,” Jensen said. 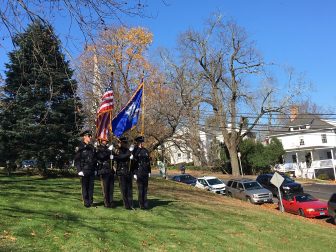 During an opening prayer, McLane remembered the “brave men and women who sacrificed so that we may experience freedom.”

“As we remember our veterans, let us also be courages protectors and true guardians of freedom,” McLane said.