A nearly 10-year effort to revitalize a World War II memorial path in Mead Park, spearheaded by a longtime New Canaan resident, finally has an end in sight, as repair of an existing footbridge and construction of a second one recently commenced.

Originally installed in 1945 at the end of World War II by a local gardening club, the “Gold Star Walk” at Mead had included 38 flowering trees honoring each of the New Canaan men who lost their lives in service (see list at end of article). Each tree had been fitted with a plaque bearing the name of the deceased.

Yet the trees and the walk have fallen into disrepair, with the plaques missing and many of the trees no longer flowering—a situation that New Canaanite and Korean War vet Jim Bach found unacceptable.

He has raised funds to complete the Gold Star Walk and has tapped local landscape architect Keith Simpson for the critical bridge work. 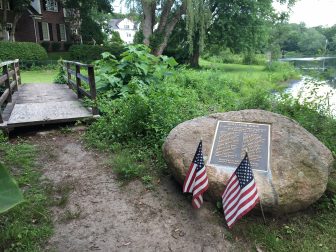 The plaque affixed to a boulder along the Gold Star Walk, a World War II memorial in Mead Park. Credit: Catherine Gorey

“The foundation is in for the bridge, we’re just waiting for the wooden portion and steel beams to come in,” Simpson said on a recent morning. “We’re making sure all the trees are thriving for all of the people that the walk remembers. The first bridge repairs will begin after the new bridge is put in. It really will be the best possible completion of the walk.”

It’s been a long time coming.

Bach, a 1947 graduate of New Canaan High School and lover of Mead Park, immersed himself in a decade-long labor of love to restore and enhance the forgotten memorial. 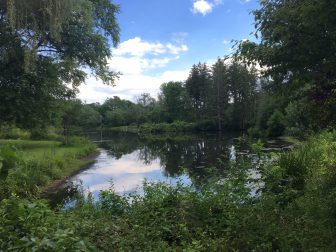 A look at Mead Pond from the existing footbridge’s area, forming part of the Gold Star Walk. Credit: Catherine Gorey

Bach partnered with town leaders and concerned residents to plant new trees, replace the plaques and install benches in 2003. While significant improvements were made through this initial effort, the main part of the project, repairing the first bridge and installing a second to extend the walk into a full loop and creating “the experience of walking around the pond edge,” according to Simpson, was put off due to a planned dredging of Mead Park and the project’s hefty price tag.

Since then, Bach tirelessly sought out the necessary monetary support to continue the effort.  Donations came in from the Hannah Benedict Carter Chapter of the Daughters of the American Revolution and other private donors. Municipal bodies including the Parks & Recreation Commission, Board of Selectmen, Inland Wetlands Commission and Town Council approved the plan over a period of months.

“It’s finally happening,” Bach told NewCanaanite.com. “It’s exciting to me because it’s the end of the 10-year adventure, a finish to something we started a decade ago, and an idea that started long before that.”

A ribbon cutting and grand opening of the “new” Gold Star Walk will be scheduled, he said.