Creighton, a 1960 New Canaan High School graduate who excelled in academics as well as sports, had earned a bachelor’s degree in American Literature from Middlebury College, then joined the U.S. Army Signal Corps and went to Vietnam for two years, where he served as second lieutenant. 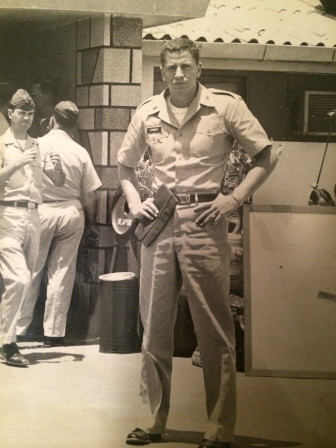 Though the war had become very unpopular, Sandra recalled, the siblings’ grandfather William B. Conner—the man for whom Conner Field off of Farm Road (just below what is now Saxe Middle School) is named—told Creighton “to be an example for the rest of the kids and march in the parade, which my brother did.”

“My mother and I watched him and we kept running around from every corner on Main Street—you know how there are all those side streets off of Main?—because he looked so great in his uniform,” Sandra, two years younger than Creighton, recalled from a living room sofa at the Douglas Road home she shares with her husband of nearly 47 years, Mark—it’s not far from the house where she and Creighton grew up, on Oak Street up near the corner of South Avenue. “He marched in the parade down to the cemetery. He looked so handsome. It was a nice visit and everything. He met my husband during that leave. It was the only time he met the man I would marry.”

Not long after, three months before his service would have ended, Lt. Creighton Conner broke his neck and died after a fall during training at a military base in California. He was 23. 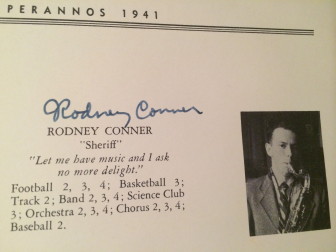 Part of the 1941 “Perannos” New Canaan High School yearbook entry for William R. “Rodney” Conner has his nickname as “Sheriff.” He earned it by defusing situations at school such as bullying, which his survivors say he never allowed. Contributed photo

That’s the same age that the siblings’ uncle, William Rodney “Rod” Conner—a medic with the U.S. Army 85th Mountain Division and a man they never met—was in 1945 when he was killed by gunfire in Northern Italy during World War II.

For Sandra and her family—husband Mark was a yeoman third-class in the U.S. Navy, son Mark a U.S. Marine lance corporal, cousin “Q” served in Korea—Memorial Day weekend is a time of reflection and remembrance.

And for Sandra, that includes memories of herself and Creighton—for example, running into town on Christmas Eve, to God’s Acre, in the early 1950s for caroling and then going to the old Melba Inn afterwards. 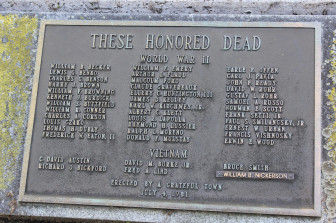 “Memorial Day makes me think about all the wonderful memories of growing up in this town, memories of my brother, one of two baseball players that had hit a home run out of Mead Park at that time, and who was also a scholar,” Sandra told NewCanaanite.com. 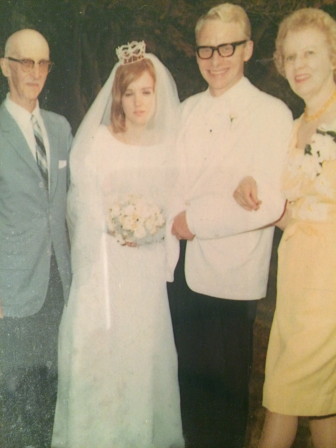 “And it makes me think of all the soldiers, no matter what branch of service in the military, who really stood up for this country and put their lives on the line to save the liberty and freedom that we all share today,” she added. “My family, my wonderful grandfather who took me to games, my brother who walked into a room and lit up a room, so charismatic, he served in the military to keep safe our freedoms. I look back on all of the different things that my brother and I shared, because we were only two years apart. So when Memorial Day happens I think about the past, of all wonderful people in town and what it was like in ‘50s and ‘60s—it’s very different from today. Back then, everybody knew everybody else, knew all of the shopkeepers and they knew you.”
And they knew William “Pop” Conner, his son Rodney and grandson Creighton—all prominent community members, popular in New Canaan and among their peers, and dedicated to giving back. 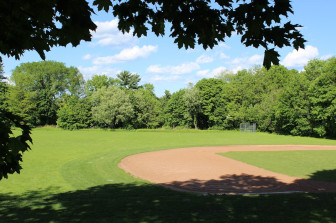 Pop Conner’s son Rodney was a standout athlete who earned the nickname “Sheriff” in high school for defusing situations that could have escalated—especially in cases of bullying, Sandra said. 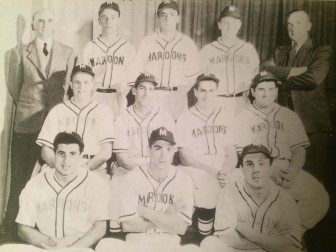 William B. Conner (top left) with the 1946 New Canaan Maroons, an adult rec baseball team that he managed from the late-1930s. That’s Tom Cronin in the top-right. Conner Field was named after William B. Conner, a major sports booster in New Canaan. Contributed photo

“He wouldn’t stand for that, he always stepped in,” she said.

“Everybody liked Creighton, and everybody liked Rodney, were able to connect with them,” she said. “They were popular because they were nice and tried to care for other people.”

Sandra herself knew nothing of Rodney until the age of about seven or eight, she recalled. She was taking piano lessons at that time and often walked to her grandparents’ house next-door, at the northeast corner of Oak Street and South Avenue, “to practice songs and tunes.” 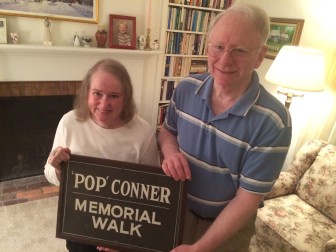 Sandra Conner Lefler and her husband, Mark, with the original William B. “Pop” Conner sign that once stood in the path between what is now Saxe Middle School (it was the high school back then) and Conner Field, named for her grandfather. Credit: Michael Dinan

“I would go over and see this framed picture of a soldier, but I never knew who it was,” she recalled. “Finally I got old enough to ask, and my dad told me, ‘That’s your uncle Rod who died in World War II.’ And I never realized that I had an uncle Rod. I guess people then didn’t want to talk about something that was just so painful. I finally said, ‘Who is this? He must be important because he’s on the grand piano.’ ”

And he died a hero, trying to save the lives of fellow soldiers, earning a Silver Star and Purple Heart.

Part of the commendation letter for the Silver Star says: 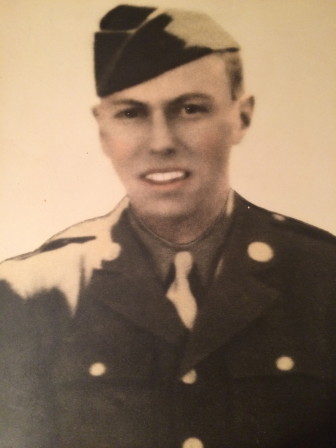 New Canaan High School Class of 1941’s William R. “Rodney” Conner ca. 1942. A medic who was killed while serving in Italy during World War II, he was a member of the 85th Mountain Division out of Fort Drum, NY. A wing of the hospital there is named for him. Contributed photo

“For gallantry in action on 3 March 1945, near Cimon Della Tiella, Italy. Assigned to support the leading platoon of an attack upon an important objective on a steep, open mountainside, Technician Fifth Grade Conner, a platoon aid man, with concern for only the welfare of the stricken, maneuvered about under the heaviest barrages to treat the wounded. Being constantly alert to the call of aid, fearing no dangers for himself, he was quick to see a comrade lying helpless in an exposed area less than fifty yards from an enemy position. Against all advice and fully aware of the intensity of the fight, he ventured out and had gone but a few feet when intense enemy fire compelled him to take cover. Fixing his Red Cross insignia on a stick, he left his sheltered position and boldly advanced to the side of the wounded man where, placing the stick in the ground, he started to aid his comrade. While performing his work in the midst of the fighting, Technician Fifth Grade Conner was severely wounded and died almost at once. His noble courage and high regard for his fellow men are of the greatest attributes of the United States Army. Technician Fifth Grade Conner’s heroic actions afford much inspiration for all who know of them and set a high goal for the men of his Service.” 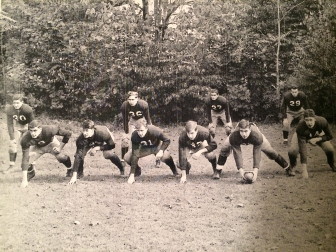 (Within the past year, two items believed to have been on the person of Rodney Conner at the time he was killed—a canteen and helmet—were recovered by a man in Italy who then contacted a relative here, Sandra’s cousin Pamela Chatterton Purdy. The Italian man is planning to set up a memorial for Rodney and others in Italy, Sandra said.)

Around 1988 or 1989, the U.S. Army further honored Rodney’s heroic service by naming a clinic at the military hospital at Fort Drum after him, Sandra said. 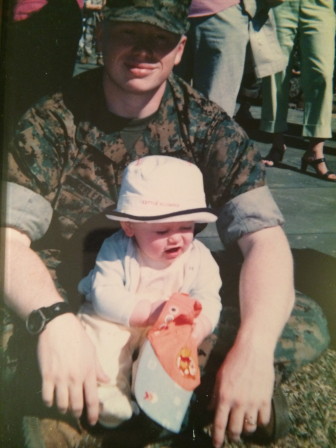 That honor has special meaning for Mark Lefler, a 1993 New Canaan High School graduate who served as a lance corporal from late 2000 through the fall of 2003. Mark had been stationed at Courthouse Bay in Camp Lejeune, working as a computer repair technician for the school of combat engineering.

Mark, now an Auburn, N.Y. resident, said he thinks of both Creighton and Rodney on Memorial Day.

“It’s a time to sit down and reflect, and to feel lucky enough that the people who were in combat that weren’t killed, were not killed and made it home,” he said. “To reflect and I think, in general, it’s not as solemn as it should be. It’s not a time of mourning per se, but I think people kind of lose the sense of what it means.” 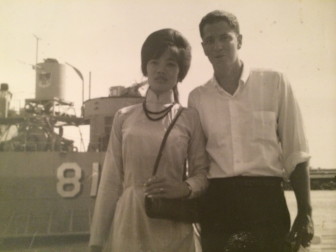 Asked whether he also thinks about some of those he himself served with, Mark said: “It haunts me sometimes that I don’t know whether some of the people who I went to training with and worked with at Courthouse Bay were killed or not.”

A father of two, Mark named his younger son ‘Conner’ to honor his mother’s maiden name—because Creighton was killed, she (Sandra) is the last of the New Canaan Conners.

Sandra herself said she isn’t sure whether she will head down to watch the Memorial Day parade in town on Monday—though she’s been to several in the decades since her brother died, and had been a marcher herself as a Center School student who was in the Brownies and Girl Scouts in the 1950s. 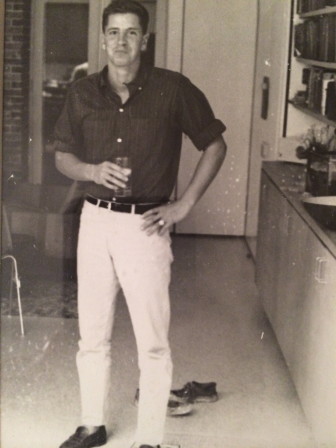 Creighton Conner, around the time he graduated from Middlebury College, 1964. Contributed photo

Sandra recalled that for her brother’s funeral service, the United Methodist Church of New Canaan was “packed.” “Every seat was filled and people were standing out of love and respect for my brother,” she recalled.

“And then down at the cemetery, they had a full Army funeral down there. We have the flag from his casket that they gave to my mother. They had two musicians playing ‘Taps’ and it echoed back and forth across the cemetery. And to this day, whenever I see on television, when they show a funeral of a police officer or a fireman that died in the line of duty, or even a military, and they play ‘Taps,’ I have to turn it off, because it’s such a reminder. 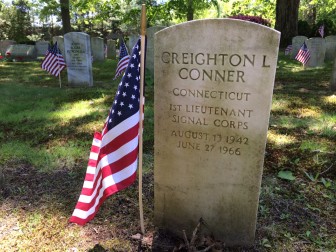 Creighton Conner is buried in Lakeview Cemetery. An area with many veterans can be found by entering in the Millport gate—not far from where New Canaan’s annual Memorial Day Parade terminates—and driving over the bridge, past the pond and it’s on the right. Credit: Michael Dinan