Though two groups have recommended far longer designations, the volunteer body that oversees on-street parking in New Canaan is weighing a 30-minute time limit for the spaces just outside Mrs. Green’s on Pine Street.

The Police Commission at its May 20 meeting took no formal action regarding the approximately seven spots along that last stretch of Pine. Those spaces remain 15-minute designations from when the Post Office was located there, replaced since by the market.

Members of the Police Commission, which has the final say, said at their meeting that that’s far too long.

“I’m OK with 30 minutes,” Commission Secretary Sperry DeCew said at the meeting, held in the training room at the New Canaan Police Department. “I’m not OK with an hour.” 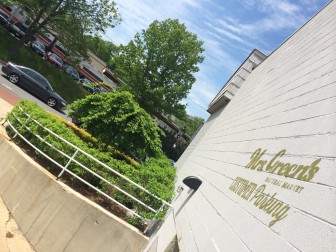 What he’s saying echoes much of what one downtown business owner—Rick Franco of Francos Wine Merchants—already has urged (Franco is secretary of the Parking Commission).

The arguments in favor of a longer designation—backed by businesses on that side of Pine, as well as some parking officials—include that it should be consistent with the rest of the street (all two hours) and that downtown visitors likely want to park once and hit a slew of shops, not just one.

Mrs. Green’s includes an underground garage with about 26 parking spots.

The Police Commission’s next regular meeting is scheduled for June 18.