During Robert M. Amen Jr.’s six years with the U.S. Air Force Special Operations Command, the nation was shaken by the events of Sept. 11, 2001, one of his brothers recalled on Tuesday. 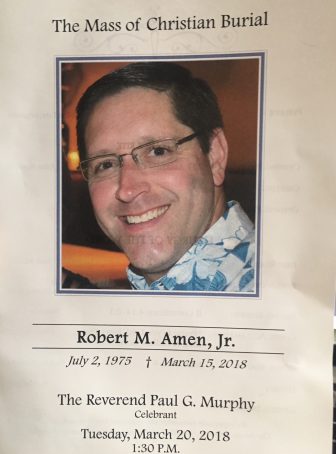 Soon, Amen’s four younger siblings—Marc, Chris, Peter and Caroline—found themselves huddled together over a phone at their parents’ house.

“It was Rob, and he was letting us know he would soon be deployed,” Marc Amen told hundreds of friends and relatives who packed into St. Aloysius Church to honor and remember his older brother, who passed away last week.

“His voice was calm and reassuring and was void of politics and proclamations. It was full of honor and pride. It was clear on that phone call that he had picked up on our fears and concerns. And with his usual brand of cheesy yet brilliant, but at times ill-placed humor, he defused the situation. He defused the tension with, ‘Mom, the president called—he needs me.’ Years later we would learn that Rob was not actually scheduled to deploy, but volunteered and insisted to be part of the first group.” 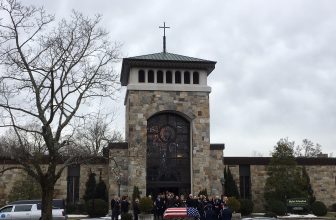 The memory spoke to qualities of determination, strength and faith that Rob Amen’s family reflected on during an emotional Mass of Christian Burial attended by former classmates and friends from New Canaan High School, where he graduated in 1993, Boston College, where he earned a bachelor’s degree in business, the Air Force and elsewhere. Remembered as kind, considerate and possessed of strong moral fiber, Amen passed away March 15. In addition to his parents and siblings, he is survived by his wife, Kerith, and their daughter, Adair.

During the Mass, Josh Morin read from Revelation 21:1-7, Shannon Foley from II Corinthians 4:14-5:1 and the Rev. Paul G. Murphy from John 14:1-6. Hymns sung by those gathered to celebrate Amen’s life included “Amazing Grace,” “The King of Love My Shepherd Is,” and “On Eagle’s Wings.” 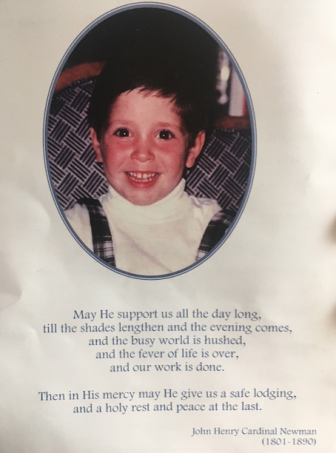 Marc Amen noted in remembering his brother that he lived by the motto of his alma mater—“Ever to excel.”

Those “were not hollow words to Rob,” Marc Amen said. “He lived them,” adding in reference to the Boston College mascot: “He was an eagle through and through.”

Though Rob Amen went through many ups and downs during deployments to Iraq and Afghanistan, his heart and mind continued to focus on those he loved back home, Marc Amen recalled.

“For us, from afar, there were times when we thought, ‘Rob, this is really tough.’ He would always answer back, ‘Don’t worry, I’m fine.’ When things were great, we would say, ‘Rob this is incredible.’ He would answer back, ‘They’re OK, but how are you doing? Are you OK? Can I help you with anything?’ This was Rob. Always concerned more about others and less interested in his own struggles. What humility. What altruism. What grace.”

“He lived his faith in all that he did—heart, selflessness, faith and family were core foundations of Rob, what made him so special to all of us. He was a person who loved life and took everything in stride. He never got caught up in the small things, and always that smile on his face, no matter what he was doing or going through. The reality is beneath his calm, warm and charming exterior was a strong, tough, resilient and graced man with an outsize conviction and dedication to care for others. But what we remember most is his goodness and his kindness and that is what we will miss the most. Rob was a prince of a man. How fortunate are we to have had him in our lives.”

Amen’s sister, Caroline, said she and her brothers wanted to share what made Rob so special.

Peter Amen described his brother as “the sole founding member of ‘Team Amen’ ”—and said that Rob “cherished being the first child in this extended family.”

Even so, Rob Amen “could not be happier” when younger brothers and a sister began to appear, Peter recalled.

“He loved having more team members,” Peter Amen said. “I think this is when he really started to teach us lessons. With two new baby brothers he often would sneak into their room, take them out of their cribs and put them into his, so that they could be together. He was really teaching us the importance of family and how we should all treat each other.”

“Like the one when he convinced me when I was five to take the blame for gluing a drawer shut in our kitchen because he had already been in trouble. Like any other brother wanting to belong, of course I took the blame. I think we all learned how to speak up for ourselves after that. Rob was a great older brother, perhaps the greatest. Not only did he not exclude us—on the contrary, he sought to include us in all aspects of his life. He played with us, he helped us, laughed with us.”

Whether it was at work or purely in fun, Rob Amen “would do whatever was needed,” Peter said, such as signing up to become manager of the lacrosse team his senior year of high school “simply so he could be closer to his best friends and his brothers.”

While individual achievements were important to him, “it wasn’t absolute,” Peter said.

“It’s not what solely motivated him. But what he cared most about was being the best teammate, whether on the field, in the stands or from afar, Rob did whatever was needed.”

In delivering the homily, Murphy noted that Amen’s untimely passing is “not the way it’s supposed to be.”

The pastor drew a comparison to the “grief, confusion and doubt” that St. Thomas “certainly must have experienced” on learning from Jesus as they arrived in Jerusalem that the son of God for whom he had given up everything would be arrested and crucified.

“And our lord Jesus Christ tenderly and lovingly and reassuringly looks Thomas in the eye and says to him the same thing our Lord is trying to say to us in our grief, in our confusion, in our doubt: Do not let your hearts be troubled. You have faith in God, have faith also in me. Tenderly, lovingly reassuring us that this is not the way it should be, but it is the way it is. Peace. Do not let your hearts be troubled.”

For those who have no faith, Murphy said, “this is just the way it is.”

“But for men and women of faith, we know that there is order and purpose and direction,” he said, adding: “We know that love is meant to be forever.”

Murphy urged the faithful to reflect on the upcoming Easter celebration and to understand Good Friday and the Resurrection this year “far more profoundly” than in the past.

Although “this is not how it’s supposed to be, for people of faith we have every confidence that this is not the last word,” Murphy said.

In his words of remembrance, Chris Amen invoked a similar feeling.

“Unfortunately, no words of ours will ever be enough to articulate how we feel about our brother or how much he loved this community, his family or most importantly, Kerith and Adair,” Chris Amen said. “Rob is simply one of those special people who stands alone in grace, courage and compassion.”

Yet his family has taken comfort in these difficult days in the words of Henry Scott-Holland in a 1910 sermon that known today in poetic form under the title “Death Is Nothing At All” (text below).

Death is nothing at all.
It does not count.
I have only slipped away into the next room.
Nothing has happened.

Everything remains exactly as it was.
I am I, and you are you,
and the old life that we lived so fondly together is untouched, unchanged.
Whatever we were to each other, that we are still.

Call me by the old familiar name.
Speak of me in the easy way which you always used.
Put no difference into your tone.
Wear no forced air of solemnity or sorrow.

Laugh as we always laughed at the little jokes that we enjoyed together.
Play, smile, think of me, pray for me.
Let my name be ever the household word that it always was.
Let it be spoken without an effort, without the ghost of a shadow upon it.

Life means all that it ever meant.
It is the same as it ever was.
There is absolute and unbroken continuity.
What is this death but a negligible accident?

Why should I be out of mind because I am out of sight?
I am but waiting for you, for an interval,
somewhere very near,
just round the corner.

All is well.
Nothing is hurt; nothing is lost.
One brief moment and all will be as it was before.
How we shall laugh at the trouble of parting when we meet again.