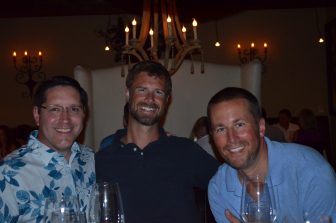 A Boston College graduate and U.S. Air Force veteran who served for six years with distinction, including multiple tours in Iraq and Afghanistan, Amen died Thursday at age 42. He is survived by his wife, Kerith, and their daughter, Adair.

His life will be celebrated at a funeral Mass at 1:30 p.m. Tuesday at St. Aloysius Church.

Danielle Bruno Baldwin, a writer in San Diego who graduated from NCHS with Amen, remembered him as “one of the kindest, gentlest and most generous souls I ever met.”

“I don’t remember him ever being angry with anyone—he was just the nicest guy in our high school,” she recalled. “He got along with everybody.”

A classmate of Amen’s starting in West School, through Saxe and NCHS, Baldwin recalled carpooling with him now and again, in a group that included Jeff Mellick, Josh Rucci, Doug Campbell and Matt Dolan. 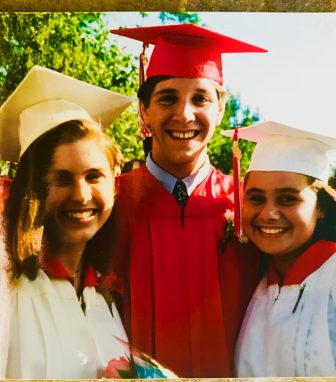 “He took care of people,” she said. “You were never alone when you were with Rob, if that makes any sense.”

Self-effacing and inclusive, Amen is remembered by friends as especially attuned to the needs of others.

Jenn (Panaro) Anderson, a Fairfield resident who works as vice president of marketing and communications at Fairfield University, said she was a good friend of Amen’s through high school. The classmates went to senior prom together and remained good friends through college, the Air Force and after, Anderson said, meeting up in 2013 at the class’s 20th reunion, which Amen attended with Kerith, who was pregnant with Adair at the time.

She recalled instances in high school when Amen, sensitive to fellow students who appeared not to have a close group of friends, would reach out to them in lunchroom conversations.

“In the cafeteria, he would call somebody over or go over to say ‘Hi’ to them—I think that just really went with how genuine he was,” she said. “It was almost as if he had a sort of inner confidence and genuineness that, combined, made him a friend to everyone.” 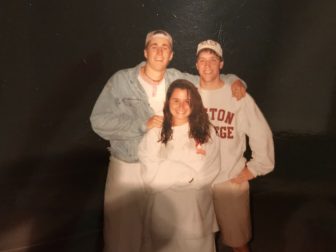 When news of Amen’s passing broke, Anderson said, grieving friends from several different years immediately started sending emails and texts to each other.

“It’s one of those things where everybody is affected—even if you didn’t know him well, he had this profound sort of influence on people in such a positive way,” she said.

Mark Lefler, a former computer systems analyst in the U.S. Marines who now lives in Auburn, N.Y. and works as a computer technician, said high school was often difficult but Amen made it a bit easier.

“Rob was always nice to me even though most people were not,” Lefler recalled. “As far as I knew, he never had a mean thing to say about anybody, which in my opinion, in our time at New Canaan High School, was a very rare thing.” 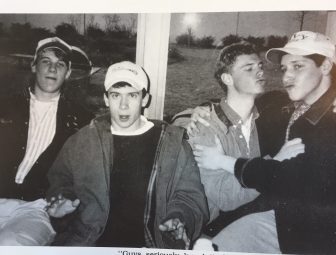 Classmates Tyler Hardy and Josh Morin, who work in sales in Atlanta, Ga. and Peoria, Ill., respectively, are traveling back to New Canaan to attend services for a friend that they called a “brother.”

The trio spent 95 percent of their time at NCHS together, said Hardy, who first met Amen on a soccer team in middle school.

“I personally did not know a nicer person, and he’s the kind of guy who would just always be there for you, no matter what,” Hardy said. “Just completely selfless. I absolutely loved who Rob Amen was. He was so easy to be around. Always made everyone around him comfortable.” 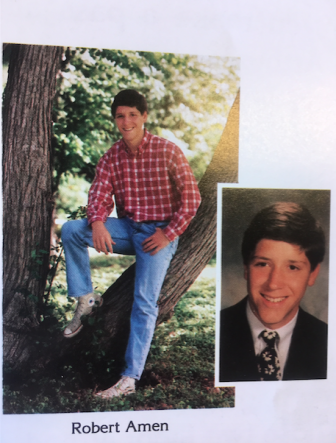 He added: “He was as good as they get, and frankly, someone that was a role model for me. I found myself thinking frequently, that guy’s demeanor, his composure, his attitude, I just wanted to emulate that. He was really the most quality person I know.”

Morin said that Amen made both himself and Hardy better people.

“A very sincere, humble, genuine human being who was a fantastic friend, father and husband,” Morin said. “A guy with a great sense of humor. Always put his friends first. Somebody that we deeply miss.”

Amen’s reliably upbeat nature appears to have been a trait since childhood. 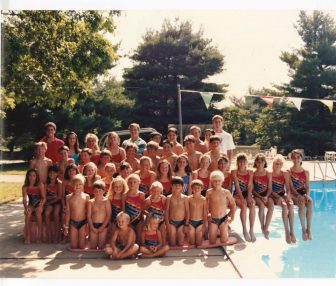 Woodway Swim Team mid-1980s. Rob Amen is in the back row, third from left. Photo courtesy of Colleen Hann

Another classmate, Todd Ohlmeyer, an Austin resident who works as men’s golf coach at St. Edward’s University, remembered playing “running bases” with Amen in the courtyard in front of the pool at Woodway Country Club when they were kids.

Even back then, Ohlmeyer said, one lasting impression of Amen is of his smile.

“I remember playing various things around Woodway with him and he was always smiling, always wanting to have fun, in the pool or on the tennis court,” Ohlmeyer said.

He added: “I can’t imagine anyone having a bad word to say about Rob—he befriended everybody.” 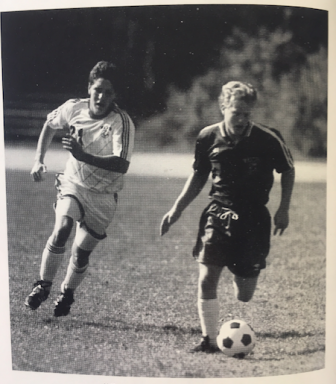 Scott Ericson, a town resident and sports writer with Hearst CT Media, said Amen possessed a rare quality for a teen in the degree to which he genuinely cared for others.

A teammate in soccer, Ericson also recalled Amen as an intense competitor.

“The soccer coach would always point to him and say, ‘If you guys all just hustled and played as hard as Rob,’ ” Ericson recalled. “He was not a big boisterous kid, just went out there and played really hard, all the time. The way he was, he’d just put his head down and get the work done.” 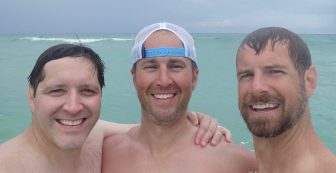 For Colleen (O’Reilly) Hann, a 1992 NCHS graduate who knew Amen and his family through Woodway, he was a gregarious, “welcoming” person who “always thought of others before himself.”

“When I lost a job back in 2010, he helped me get an interview at the company where he worked,” Hann recalled.

Hann said she lost touch with Amen somewhat during college, but that when they reconnected it was as if no time had passed. 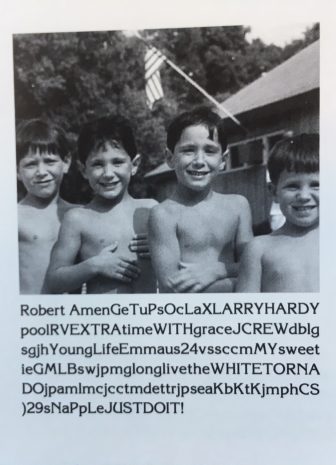 On Nov. 11, during New Canaan’s annual Veterans Day ceremony, Amen’s name will be read aloud at God’s Acre, to the tolling of a bell, along with other town residents who have served in the U.S. Armed Forces and passed away within the prior 12 months.