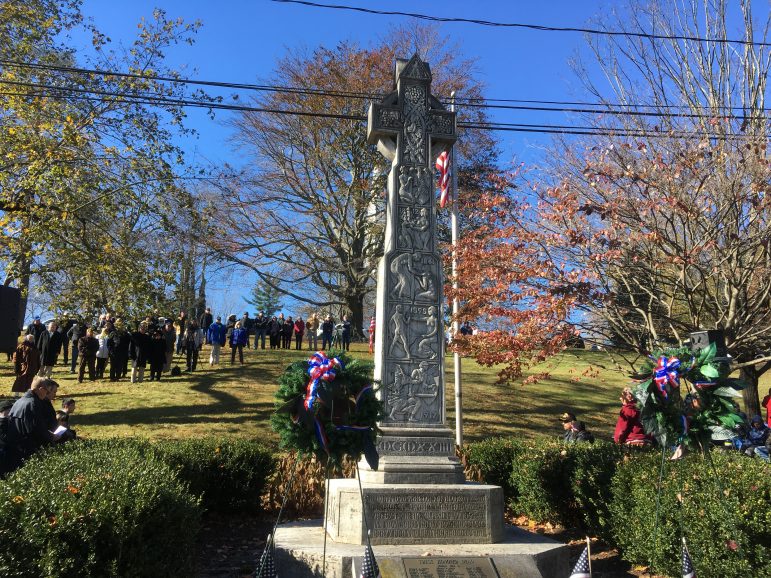 During the Vietnam War, Peter Langenus had what he recalled on Saturday morning as “the honor and privilege” of commanding a rifle company.

“They are the soldiers that carry the burden,” Langenus, commander of VFW Post 653, told about 100 residents gathered in the new northern entrance to Town Hall for a special dedication following New Canaan’s annual Veterans Day ceremony at God’s Acre. “The grunts. The war fighters. The gunslingers. We would go out on operations that lasted 30 to 35 days. And in that 35-day period, we did not bathe. We did not shave. We did not change our clothing. We did not change our socks. And if it was during the monsoon, we spent half the day lying in the mud, waiting at an ambush site.”

The night before an operation, Langenus recalled, he would brief his platoon sergeants and squad leaders—as well as any enlisted soldier who wanted to hear—on where the company was going, who it was looking for and where it would end up.

“And they would sit there and they would listen to this—because, quite frankly, one jungle is the same as another jungle. But there were two questions at the end of my briefing that they wanted answers to. And they would look into your eyes and look into your soul for the answer. The first question was, ‘If I get hit, who is the air ambulance company, the dust-off, and to what hospital am I going to be flown?’ And the second question, the most important question to them, and they would bore into you with a laser-like focus, into your eyes and into your soul, and they wanted to know, if they got hit—meaning if they were killed—would they be forgotten? Would they be left behind?”

Langenus continued, his voice breaking: “And I said to them, ‘No man is left behind. And no one is forgotten.’ ”

One among those in attendance could be heard saying under his breath: “That’s right.”

Langenus noted that several groups—including the town, Exchange Club of New Canaan, Daughters of the American Revolution and American Legion “in a big-time way”—joined in the effort to commission, transport and install the plaques at no cost to taxpayers.

“Our goal was to include people, not to exclude,” Langenus said. “To leave no person behind. I am certain we are not perfect, but we did our best.”

The unveiling capped an emotional morning in New Canaan that began with a stirring Veterans Day ceremony at God’s Acre—one that, for the first time in decades, did not include Donald Gels, veteran and bugler who passed away last week, Langenus said. (Gels had been recognized not six months ago, at a Memorial Day service, for being “the alpha and the omega for the town of New Canaan’s ceremonies and celebrations.”)

U.S. Navy veteran and 1966 NCHS graduate Christopher Tuttle served as keynote speaker during the ceremony. It also included a call to assembly and taps played by NCHS student Isaac Chu—who stood where Gels long has, filling the role admirably and receiving special recognition from Langenus—Pledge of Allegiance, introduction of Tuttle by Mallozzi, presentation of the colors by New Canaan Police Department honor guard members Lt. Aaron LaTourette and Officer Thomas Dewey, comments from New Canaan Historical Society President Mark Markiewicz, tolling of bells, placement of wreaths at the Wayside Cross by representatives from the Hannah Benedict Carter Chapter of the Daughters of the American Revolution, reading out by Langenus of New Canaan veterans who have passed since last year, recitation of “In Flanders Field,” moment of silence and opening and closing prayers led by Chaplain John McLane, a U.S. Army captain in Vietnam.

In his remarks, Tuttle noted that Veterans Day—unlike Memorial Day—is a celebration of veterans, and he recalled four men who had served with the U.S. Armed Forces and had lasting impacts on his life: Warren Tuttle, a paratrooper who was with the 11th Airborne of the U.S. Army in the Pacific campaign during World War II; Joseph C. French, a U.S. Navy corpsman during World War II who was assigned to the U.S. Marine Corps and, as such, saw some of its fiercest fighting in the South Pacific; James O. Lewis, Tuttle’s seventh-grade history teacher—the first African American educator hired at Saxe Middle School—and a professional singer who had been stationed with the U.S. Coast Guard during WWII; and William J. “Billy” Genovese, who served with the U.S. Marines in I Corps after attending Monterrey Language School to learn Vietnamese, was seriously injured, won a Bronze Star and is known to many today for his role in the documentary film “Witness,” chronicling his sister Kitty’s 1964 murder in Queens, N.Y.

Langenus prior to closing out the ceremony at God’s Acre called for Mallozzi to join him at the podium and embrace New Canaan’s highest elected official, who did not seek re-election this year after six years in the town’s top job. Langenus called Mallozzi “an extraordinary friend of veterans and friend of the town of New Canaan.”

New Canaan for nearly a century has honored local men and women who have served in the U.S. Armed Forces, listing their names on bronze plaques featured in Town Hall. The first plaques were created in 1923, honoring veterans of the Revolutionary War, Mexican-American War, Civil War and World War I—the same year that New Canaan erected the Wayside Cross at the foot of God’s Acre, also a WWI monument. On Veterans Day last year, officials unveiled newly completed plaques listing the names of World War II veterans from New Canaan.

What follows is a list of local veterans who have passed away since last Veterans Day:

One thought on “‘No One Is Forgotten’: Officials Unveil Plaques Honoring Korean, Vietnam, Gulf Wars and War on Terror Veterans at Town Hall”