A local organization dedicated to preserving land and open space in New Canaan has acquired a large property in Silvermine, protecting it from future development and closing the loop on a closely followed conservation effort. 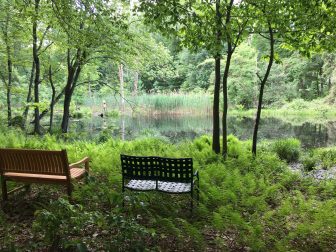 The Fowler home looks out on this pond. Credit: Sam Stoner

“It means so much to have the land preserved, to bring it back,” said Mark Fowler, son of Jim and Betsey and now the nature initiative director at Grace Farms. “The old house will come down and it will be a beautiful piece of property with wetlands and small fields and a beautiful forest and a nice hiking trail, so for me, this is what the Fowler legacy is all about and it’s what the town needs.” 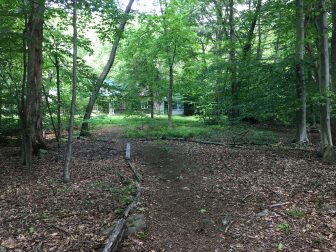 His dad, Jim Fowler, is an award-winning zoologist who gained fame as host of TV’s “Mutual of Omaha’s Wild Kingdom.”

“My father was a famous falconer, and we had a falconer that lived with us, so there was always some amazing wildlife experience going on there, and therefore we always were outdoors,” Fowler recalled. “We were always hiking around in these back properties.”

Mark Fowler said that preserving the land is important, in part, because it gives locals a place to unplug and explore—a snapshot of the 1992 New Canaan High School graduate’s own upbringing. 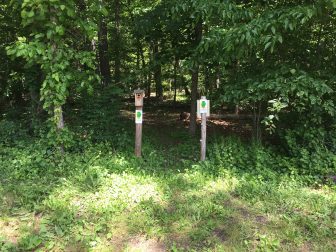 The Cedar Lane entrance to the trail. Credit: Sam Stoner

“Silvermine doesn’t have any area for hiking,” he said. “That’s the one thing that it does not have, so I’m really excited that this area will be open for Land Trust visitors and obviously for passive recreation.”

According to Mark Fowler, the property is unique in that it long has served as a naturally developing wildlife corridor.

“Growing up there was incredible,” he told NewCanaanite.com. “It’s a beautiful piece of land that has not been touched. We never cut down any trees and we kept it completely wild, so we had basically six acres of forest and land, and there was wildlife everywhere. We had all the hawks and raptors, and obviously deer and wild turkeys, all the way down to the wood ducks that nested in the pond. It’s a beautiful place…it’s still wild and I love having wetlands right on your property because you can enjoy.”

Town officials earlier this year passed a special appropriation of $267,000 to help the Land Trust finalize its $1,070,000 purchase of the property. The Land Trust needed a total of $1.3 million to complete the deal, and raised a significant amount of funds through small donations.

Land Trust officials credited widespread community support for the purchase and preservation of the property, and noted that the Trust for Public Land in Connecticut was an instrumental partner providing fundraising support, grant writing and legal counsel over the roughly two years leading up to the May 5 closing.

The Land Trust on May 23 applied for a permit to demolish the 1940-built Cape Cod-style home on the property.

Habitat for Humanity will remove and re-use the home’s furnace on one of its projects, according to former Land Trust Executive Director Mike Johnson.

Once the house is demolished and the site filled in, “our initial plan is to rehabilitate that area of the property where the house stood and manage it as a meadow,” Johnson said.

The property at this point is not open for visitors, Land Trust officials said.

Once it’s removed the meadow is expected to “create a beautiful approach for walkers as they exit the woods and approach Still Pond from the trail as it winds westward from the marked trail head at the wooden split rail fence just off of Silvermine Road,” Johnson said.

The Land Trust is working with a Boy Scout on an Eagle Scout project that will create a raised wooden walkway across some of the soggy wetlands areas that will create a connection between the 6.35 acre Silvermine Fowler parcel and the larger Hicks-Kelley Audubon property to the West, he said.

“The walkway should be installed by the end of the summer,” Johnson said.

“As we prepare the property for visitation we have had volunteer help from the SLOBs and local stone mason Greg Fallaci who guided work to reset the stone wall that faces Silvermine Road at the eastern extent of the property. We have also worked with Gannon Rustic Fence to install a 3-rail fence with gate and pedestrian entrance with a parking pull-off. This will go a long way in creating an inviting entry for nature lovers as they venture onto the property. Once the property is ‘open’—after the house is removed—there will be room for up to four or five cars at a pull off on either side the private driveway. We would encourage all visitors who live near the property to walk, if possible, to reduce the impact to the limited parking area.”

While the Fowlers considered selling the property to a developer, they decided that the Land Trust would be a better option after many potential buyers expressed their desire to alter the property’s natural state, Mark Fowler said.

“Before it was even on the market and people heard that it might be up for sale or something, people would come and visit and the first thing they would say if they wanted to purchase it just to be a family that moved in was, ‘Hey, let’s cut down all the trees,’ and that was pretty scary,” he recalled.

“They needed a big field or yard instead of a beautiful stand of really old trees,” he said.

“It is not uncommon to hear owls in the evening and to see red-tailed hawks perched high above in the trees during the day, or to see heron, wood ducks, and mallards floating through the pond and mingling with the frogs and turtles that line its banks,” Johnson said. “Migrating birds, as well as those endemic to the area, enjoy the calm freshwater pond as an area of respite, protection, and source of food making this area desirable for birders. The occasional red fox can be seen around dawn and dusk.”