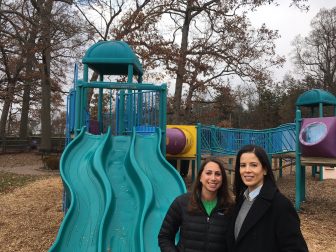 On moving to town six-plus years ago, each of the New Canaan moms—Mahoney has two boys, 5 and 7, and Chimera an 8-year-old girl and two boys, 5 and 2—found that the playground beyond the little league outfields at Mead served as a “point of entry” where they met other mothers and their children met other kids.

The Apple Cart at Mead Park Lodge serves as an ideal eatery for young families on-the-go, and Chimera said her kids love waving at dad as his Metro-North Railroad train returned from the city, watching as it passed visibly above a wooded hill to the east.

Yet the existing, 20-year-old play structure, well past its useful life, is showing its age. Though the town has done “an outstanding job” of patching it up to make it usable, Mahoney said, slides have required replacement, one piece of Plexiglass has popped out more than once (sometimes replaced temporarily by a piece of wood) and the wood chips that surround the area are not ideal.

“A lot of the moms in town have been saying that this is the first place they would go, and they love using the Apple Cart and meeting friends,” Mahoney said on Sunday afternoon, standing beside Chimera at the edge of the existing play structure as a light rain fell. “But compared to surrounding towns that have lovely beautiful playgrounds, they’re like ‘Wow, why doesn’t New Canaan have a nicer playground?’ ”

Thanks to a volunteer group the two residents helped establish and that now is working actively with the town, New Canaan may have just that very soon.

Mahoney and Chimera are co-chairs of the Friends of Mead Park Playground.

With a nonprofit fund housed at the New Canaan Community Foundation, the group is working toward a $200,000 fundraising goal to more than match the $190,000 that the town already has set aside for the current year’s capital budget to replace the existing main play structure at Mead.

With the private nonprofit group’s help—all donations are tax-deductible—that structure not only will be “state-of-the-art,” Chimera said, but additional smaller structures such as a ropes course for older kids will be acquired and the entire area can sit on a “Poured In Place” or ‘PIP’ rubber surface.

“We want to restore this crown jewel of New Canaan,” Chimera said.

“It is already the point of entry for young families moving in—and for any family, really, because you also have the baseball fields. For many families, you have the older kids on the baseball fields while the young siblings are on the playground. I really feel like this could be the crown jewel of New Canaan and we just want to restore it to its original glory. I’m sure 20 years ago this was a state-of-the-art, amazing structure and we sort of want to get that feeling back again.”

It will require additional fundraising.

The Friends group has devised a “Legacy Walkway” featuring bricks that allow for various levels of support—ranging from an individual 4-by-8-inch brick at $275 up to a business’s 12-by-12-inch brick with a logo, at $1,500 (there are also $750 and $1,000 levels). They also have premium-level sponsorships that include names on a Mead Playground ‘Welcome’ sign.

Lauren Patterson, head of the Community Foundation, said that “when neighbors come together to make a project happen, we can be a vehicle for charitable giving and offer particular expertise.”

“The Friends of Mead Park Playground Fund is a great example and we’re so pleased to support them behind the scenes,” Patterson said.

Scheduled for 2018, the Friends group’s plan is not only to replace the existing main play structure but also to expand the offerings for kids in the 5- to 12-year-old range, Mahoney said, who are seeking “more challenging elements.”

“I think it’s going to be huge,” Chimera said. “Right now we are losing a lot of New Canaanites to Ballard Park in Ridgefield.” She referred to a new PIP “Imagination Station” playground in that town.

New Canaan’s even newer version will be “spectacular,” Chimera said.

“People are going to stop going to Ridgefield,” she said. “We are going to have the smooth rubber surface which is going to be great for shock absorption. We will get rid of this messy look. It’s going to be for all abilities. You will push your stroller on here. You can’t [now] because of the chips.”

The group has already found a way to donate the existing play structure to a company that will remove, refurbish and reassemble it in a third-world country at its own cost, the women said.

“They can maybe get another five years out of it, for kids who have never seen a playground before,” Chimera said.

Donations for the Friends of Mead Park Playground may be made through the New Canaan Community Foundation page here or on the group’s main page here, and here is its Facebook page for updates.